On Celeste Manno's bedroom wall, a whiteboard contained a list of reminders and inspirational quotes which she would read at the start of each day.

At the top was the simple word "smile", with the young woman believing that something as simple as that small action could brighten someone's day. 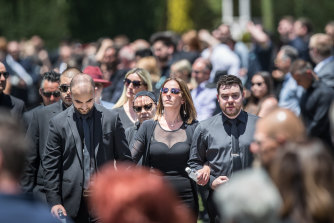 It was with this same kindness that at the end of each day she always ensured she resolved any arguments with her mother before they went to bed, telling her: "Imagine anything ever happening in the middle of the night and one of us not waking up."

This is now a nightmare her grieving mother is living through, after tragedy struck the family two weeks ago.

Celeste was found dead in her bedroom in the Mernda home she shared with her mother and brother in the early hours of November 16. A former colleague, Luay Sako, has been charged with her murder after he allegedly broke in through a window and stabbed her.

Under pastel blue skies and a warm breeze, the 23-year-old was farewelled on Monday in a celebration of her life attended by more than 100 family, friends and loved ones. 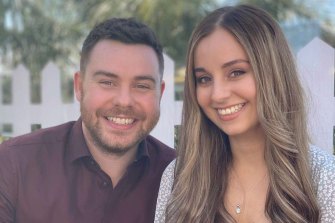 Her heartbroken mother Aggie Di Mauro stood by the white casket, adorned with pink and white lillies, and cried as she spoke of losing her "baby girl".

"Hi sweetie. It's me. Its been two weeks since you've been gone and now the time has come to lay you down to rest," she said. "There's so much I want to say to you. So much I need to say to you."

"I'm so sorry. I'm sorry because I failed you. I should have heard him come in. I can't understand how I didn't hear him coming over that fence. I keep going over it in my head and it doesn't make sense.
Nothing makes sense.

"I thought I was having a horrible nightmare when I heard the shattering of that glass and it wasn't until I heard you gasping that I realised it was real. I couldn't believe what I walked into … I'm never going to forget that image in my head. The look in your eyes was so distant, so far away." 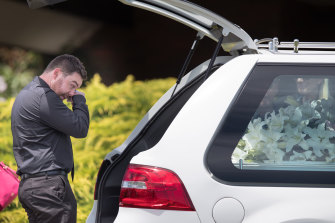 She said she didn't want to believe what she was seeing, and was praying that her daughter could still be saved.

"I'm so sorry. I can't imagine the horror you must have felt to be woken … I just didn't get there in time and I'm so angry at myself. I'm so sorry, I'm ashamed of myself because you believed your Mum would always protect you, but she didn't. I didn't hear anything, I don't understand how. It's going to drive me crazy, sweetie because I keep thinking it doesn't make sense."

"I don't know how to live with this now … one individual decided to change our lives forever. He took your life away, he took your dreams away. He's ruined our lives. He decided that if he couldn't have you, then no-one would."

Aggie said her daughter would be shocked to see the outpouring of love that has flowed since her death and said she had been intent on making sure the funeral was beautiful and memorable. 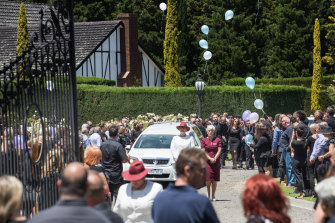 Balloons were released at the end of the serviceCredit:Jason South

Her father Tony Manno said his daughter "lit up the world for everyone around you".

"Nothing in this earth will ever be able to replace you," he said in a statement read out on his behalf. "You will always be my princess."

Celeste's older brother Jayden and younger brother Alessandro spoke of a young woman who was firmly at the centre of their family, named for the "celestial being her parents always knew she would be", and was seen by all as the very essence of love and kindness.

She studied criminology and psychology, and thought by learning more about human nature she could better help those who needed it most.

She was a natural leader and mentor at her work at a Mill Park call centre, which closed its office on Monday in honour of the 23-year-old. She was also a dedicated Collingwood fan, loved going out for dinner and drinks with friends and was extremely loyal to those she was close to.

Her boyfriend Chris, who worked with Celeste, said it had been a long road before the pair had started dating but the time they shared together was amazing.

"It was effortless to love Celeste," he said. "We made each other laugh … we would fall asleep on the phone together."

As her loved ones prepared to say their final goodbye, photos and videos of a beaming Celeste laughing and dancing with friends and family were played to the crowd as her favourite music drifted from the speakers.

At 12.30pm, loved ones formed a guard of honour as Celeste was driven out of the gardens, followed by her family.

As the car passed, pink, blue, purple and white balloons were released into the sky, while the song Forever Young played in the background, a reminder of a young woman who had everything to live for, taken too soon.