Mr Crisp, who is giving evidence at the hotel quarantine inquiry, attended a meeting with Police Minister Lisa Neville and then-police Chief Commissioner Graham Ashton at 1.30pm on March 27.

In his statement to the inquiry, Mr Ashton recalled that Mr Crisp said private security guards would be used in Melbourne's quarantine hotels, rather than police, and the Department of Jobs, Precincts and Regions would be "running" the program while Emergency Management Victoria would assist with "the coordination of the program". 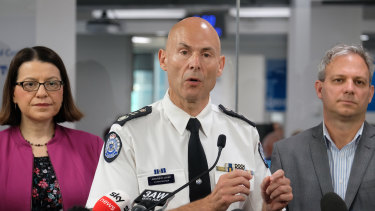 But Mr Crisp told the inquiry on Tuesday morning he did not remember saying that.

"I can only comment that I wrote 'private security' in my logbook," he said. "There was something there about private security … [but] I have no recollection of that actual conversation."

The inquiry is investigating Victoria's decision to use private security guards instead of police or Australian Defence Force personnel in its bungled hotel quarantine program.

More than 99 per cent of Victoria’s second wave COVID-19 cases can be traced back to the quarantine hotels, where security guards contracted the virus from returned travellers.

Mr Crisp signed off on both the decision to use private security guards for hotel quarantine and a request for 850 ADF troops in June that was mysteriously withdrawn just hours later.

He was asked about a note in his logbook in which he wrote that Australian Defence Force personnel and private security could work together in the hotels. But the Commissioner could not remember making that note.

He was also unable to recall how he learnt that the Department of Jobs, Precincts and Regions would organise contracts for private security companies and the hotels.

"No I can’t. I know there was quite a bit of conversation going on at the State Control Centre at that time, but I’m not sure from whom I gained knowledge," he said.

Mr Crisp said it was at that the March 27 meeting that Ms Neville told him the hotel quarantine program would be established.