The Chinese province of Hubei has largely contained the coronavirus outbreak, according to the local government.

Officials today changed the risk level of the former epicentre Wuhan from ‘high’ to ‘medium’.

A government spokesperson said ‘main battlefield’ Wuhan and the rest of Hubei had achieved ‘important periodical result’ in stemming the epidemic, but warned of regional outbreaks. 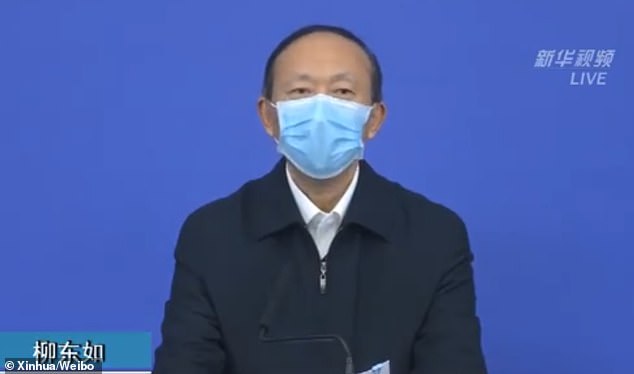 The entire Wuhan has been classed as a ‘medium risk area’, while five of its 13 districts are now at ‘low risk’, according to Liu Dongru (pictured) from the Hubei Provincial Health Commission 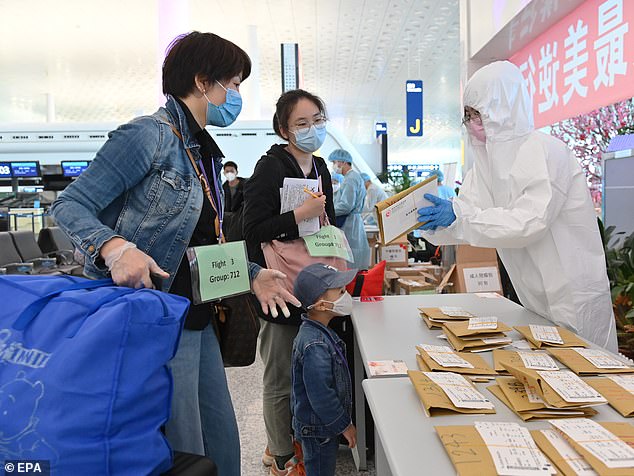 Wuhan, described by Mr Liu as the ‘main battlefield’, has registered only one case since March 18. The city, currently under a lockdown, will see its traffic restrictions lifted on April 8

The news comes as residents of Wuhan fear for a second wave of infections due to the large number of ‘silent carriers’, who show no symptoms but can potentially spread the virus to others. These patients were not recorded in the official figures.

Officials will lift the travel restrictions on Wuhan on April 8 after the city went into a draconian lockdown in late January to tackle the health crisis. Residents in other parts of Hubei were allowed to leave the province from midnight Tuesday.

The entire Wuhan has been classed as a ‘medium risk area’, while five of its 13 districts are now at ‘low risk’ for the cognation, according to Liu Dongru, Deputy Director of the Hubei Provincial Health Commission.

China’s National Health Commission has reported only one new infection in Wuhan since March 18. A doctor tested positive on March 23 and authorities are trying to identify how he contracted the disease, officially known as COVID-19.

The rest of Hubei has not registered a new case in the past 22 days, official statistics show.

The virus has killed 3,174 people and infected 67,801 in the province in central China. 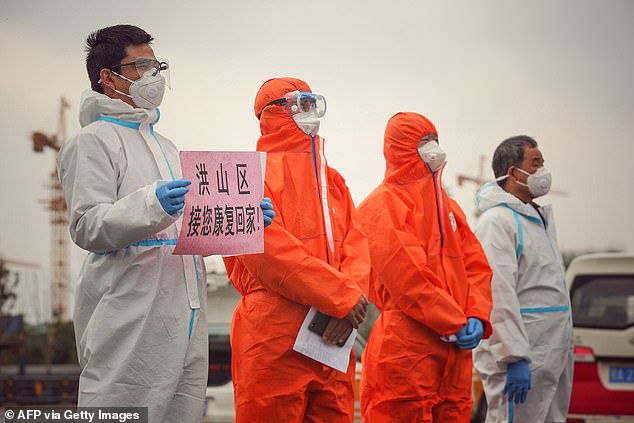 Staff members are pictured welcoming recovered patients as they are discharged from Leishenshan Hospital, the makeshift hospital for the COVID-19 patients, in Wuhan on March 1

Mr Liu said at a press conference today that the situation in Wuhan was ‘positive’.

He said: ‘The spread of the epidemic in the main battlefield of Wuhan has been mostly blocked.’

Dr Zhong Nanshan, Beijing’s chief medical advisor on the coronavirus, today hit back at speculation that China would see a second wave of infections.

Dr Zhong claimed that a rebound was unlikely.

He told state broadcaster CCTV: ‘I suspect that in our country, the epidemic would not have a second peak’.

He stressed that the new cases would likely be confined in small groups of people due to the country’s public-based epidemic-control efforts.

‘Under such strong and vigorous measures, I don’t believe a major outbreak would happen,’ he said.

The official claimed that seven cities and counties in Hubei had discharged all of their COVID-19 patients.

But he underlined the possibility of regional outbreaks.

‘We must understand that zero-case reports don’t mean zero risks.

‘Although the epidemic index has dropped, the tasks in preventing and controlling the epidemic have grown, the difficulties have increased and the responsibilities [of officials] have become heavier,’ he cautioned.

Mr Liu’s remarks come after the residents of Wubei voiced their concerns over asymptomatic coronavirus cases who don’t develop symptoms.

At least 59 per cent of the Wuhan residents who have contracted the coronavirus show mild or no symptoms and therefore were unrecorded, a study suggests.

Thousands of infections potentially fell under the radar and were not included in the government’s official count, according to the doctors at the Huazhong University of Science and Technology.

Faced with public pressure, Wuhan Municipal Health Commission on Monday released a statement, saying all asymptomatic cases would need to be isolated in quarantine camps for 14 days.

These silent carriers would be identified when officials screen the close contacts of confirmed patients and investigate cluster infections, according to the document.

Leading experts have also warned that a second outbreak could happen in China. 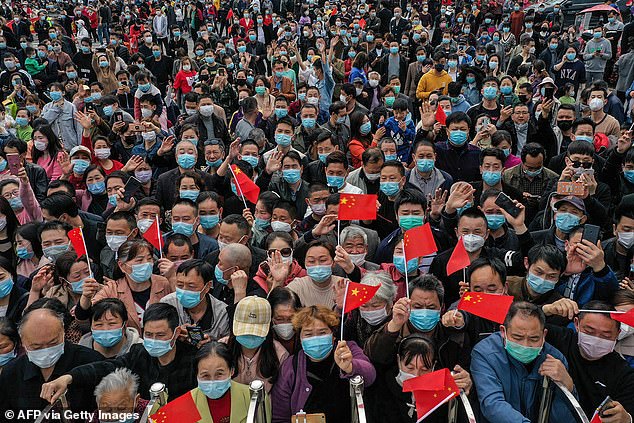 Professor Li Lanjuan, a member of Beijing’s expert team on the virus, said on Monday that she was ‘very worried that imported cases could trigger another large-scale epidemic in our country’.

And according to state-run newspaper Global Times, a second wave of infections is ‘highly likely’ and ‘even inevitable’ as the pandemic escalates.

Dr Zhong Nanshan, Beijing’s chief medical advisor on the coronavirus, today hit back at the speculation, claiming that a rebound is unlikely. 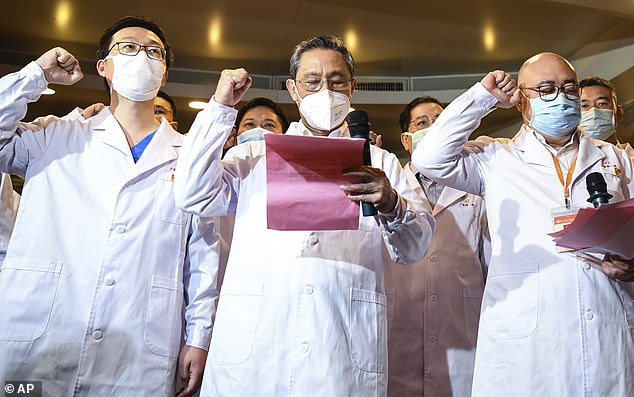 Dr Zhong Nanshan (middle, pictured on March 20) today said that a second outbreak in China would be unlikely. He stressed that new cases would likely be confined in small groups

Dr Zhong told state broadcaster CCTV: ‘I suspect that in our country, the epidemic would not have a second peak’.

He stressed that new cases would likely be confined in small groups of people due to the country’s public-based epidemic-control efforts.

‘Under such strong and vigorous measures, I don’t believe a major outbreak would happen,’ he said.

China has so far recorded 595 cases of infections detected among people arriving from abroad.

The National Health Commission reported more than 50 imported cases of the coronavirus on Friday, hours after the central government announced a ban on foreigners entering the country to prevent further outbreaks.