As I slowed the car at a congested school crossing on Monday morning, with the dutiful fluro-vested lollipop supervisor guarding their precious charges like diamonds, I could not help but notice what at first glance seemed akin to a ritual dance.

As the gate clanged shut, there were high-fives and skipping all around – and that was the parents. With their offspring safely on the other side, gleeful conversations erupted about which local coffee provider was to be the first destination. 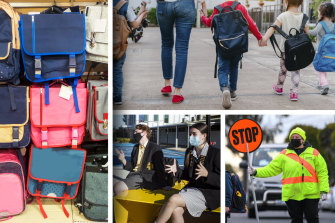 Going back to school brought joy and challenges.Credit:Jamie Brown

I was not privy to what happened on the inside of the gate, but by all accounts the kids felt the same way, albeit without a welcoming latte.

Schoolkids returning to our streets radiate energy and serve as a sure and welcome sign of recovery. As has been well documented in this paper, teachers were mixed in their responses. Some were too anxious to resume their careers at all, others just as determined to get back in front of a class.

Undoubtedly, like the rest of the workforce, there were plenty approaching the resumption of a semblance of normal as a welcome sign of light at the end of the COVID-19 tunnel.

Premier Andrews was quick to negotiate the return-to-work deal with the education union, natural allies in the ALP’s extended hold on power. Along with negotiating COVID-safe building sites and the continuous operation of frequently empty public transport for the past two years, the industrial deals not only secured the services of teachers and the train, tram and bus drivers as well as work for CFMEU members – but also a factional truce within the state ALP.

For many young teachers though, COVID has been the final nail in the coffin of their career. Back-to-back, short-term contracts guarantee financial and career insecurity and along with chronic underpayment in this historically female-dominated profession it leaves many idealistic new entrants looking elsewhere – as with nursing, another vital but undervalued job.

A Victorian trained expat teacher living and working in Hong Kong wrote to me during the week explaining how there are around 600 Australian teachers in HK, who for various reasons including the change in the political climate there, are keen to return home.

Their delight in hearing that the local teacher shortage may be overcome by overseas and retired teachers being welcomed back soon soured when the reality of getting local teacher registration was explored.

Lucy wrote “if a teacher lives overseas for more than five years we cannot register as a ‘normal’ experienced teacher, we are ‘provisional’ and on the bottom of the pay scale – even though we have previously been satisfactorily registered. A friend who has been head of maths at an international school for over a decade has been told in Tasmania that because she taught the NSW curriculum that she needs to be ‘provisional’ in Tasmania. I was told that I was provisional even though I’d graduated from Melbourne University and taught in Victoria. The last time I registered it took 12 months to get just a ‘provisional’ teacher registration.”

A senior teacher returning to the classroom, whether from retirement or overseas, is hardly likely to accept being paid at the bottom of an already underwhelming pay scale.

If the various state governments are serious about welcoming overseas and retired teachers back, they will need to find a way to fast track the registration process and even consider mutual recognition to overcome what is otherwise a burdensome barrier to the classroom.

While nobody wants open slather, there are clearly hundreds of qualified, willing and reliable candidates who are deterred by a bureaucratic nightmare.

This week Denmark announced an end to wearing masks except in hospitals and aged care homes, so we get a glimpse of what comes next. The fate of the Morrison government in the looming election [probably in May], and then the Andrews government in November’s state poll substantially depend upon it.

School and work resumption now depends on the availability of RAT kits. With Wednesday’s announcement of local manufacturing, the urgency with which supplies have been secured is portrayed by both the state and federal governments as evidence of their preparedness to do “whatever it takes”.

Sadly, the frantic catch-up efforts are ample proof of the opposite.

Back in July and August 2021, then state Liberal leader Michael O’Brien demonstrated a RAT kit on the steps of state parliament. In a rare ‘cut-through’ moment, he called on the Premier, and Health Minister Martin Foley to commit to the newly promoted technology instead of relying on PCR testing, which then was already both costing a fortune and starting to suffer from processing delays.

Both the Premier and the minister dismissed O’Brien’s press conference as a stunt and declared RAT kits were not accurate enough to be relied upon.

O’Brien is far too polite to say “I told you so”, but if the state and federal governments would accept that good policy and ideas can come from outside their own ranks, we might be in better shape this far into the pandemic.