A DISTURBING video appears to show two cops pinning a black man to the ground and hitting him after he reportedly refused to show them his ID.

The man and his girlfriend were riding in a Lyft when Clayton County Sheriff deputies pulled the car over for a broken taillight, according to an Instagram post from a woman who claimed to be the man's cousin. 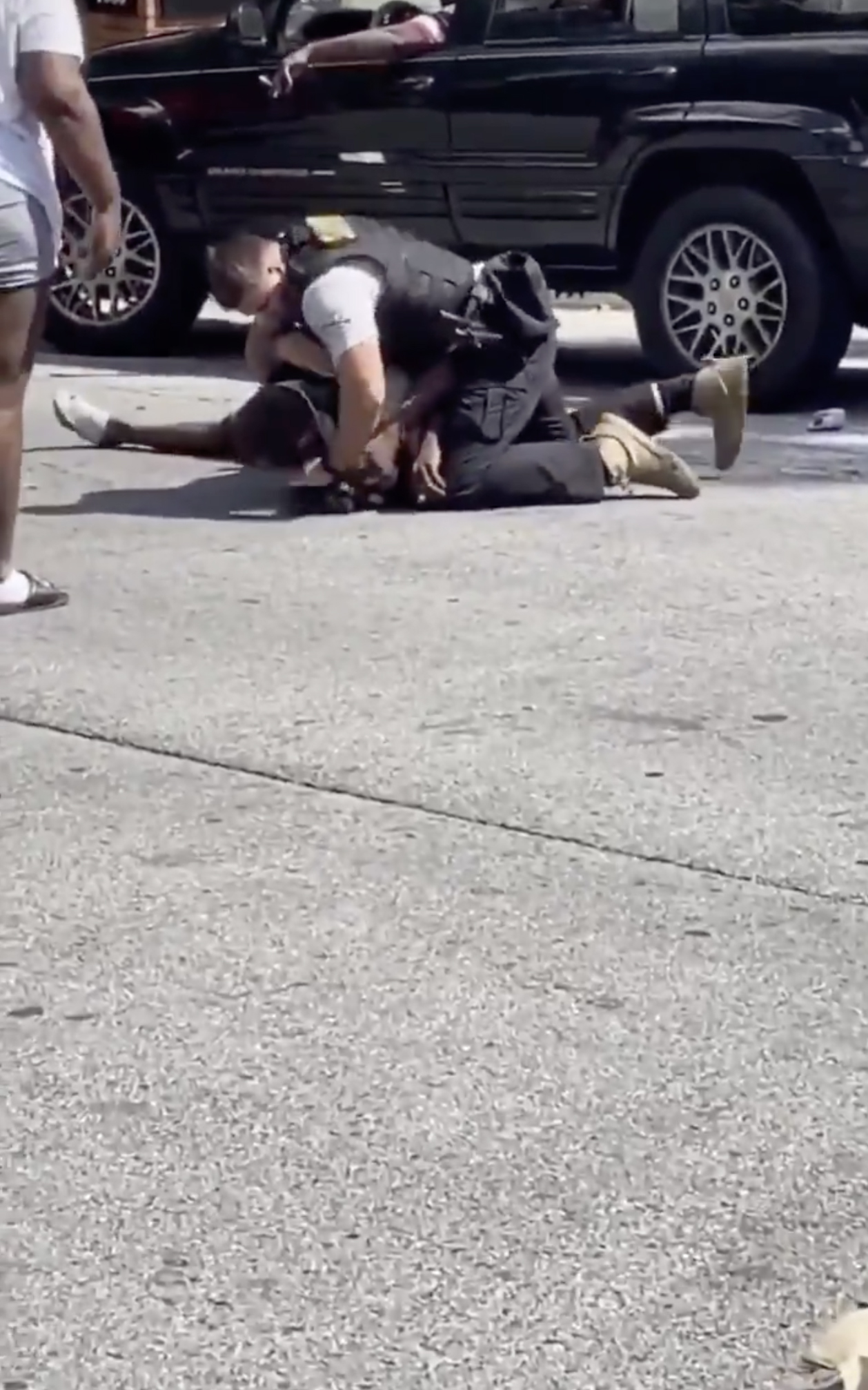 The Lyft driver reportedly did not have his ID, and the deputies then asked the passenger for his own ID. He refused because he was not the one driving, according to the post.

The cops then told him to get out of the car and arrested him when he refused, the post says. The Instagram message went live Friday and says the incident happened that day.

A second video, taken from the other side of the street and posted on Instagram on Friday by user jah.vis, shows the two cops on top of the man in front of a black SUV and a police car. One officer appears to be putting his weight on the man to hold him down and the other appears to be punching him.

The Georgia Department of Public Health Vital Records Office building can be seen clearly in the background of that video, placing the incident on Phoenix Boulevard near Hartsfield-Jackson Airport in Atlanta.

A woman, believed to be the man's girlfriend who was mentioned in the cousin's Instagram post, is seen screaming and begging for the cops to stop, telling them the man can't breathe. 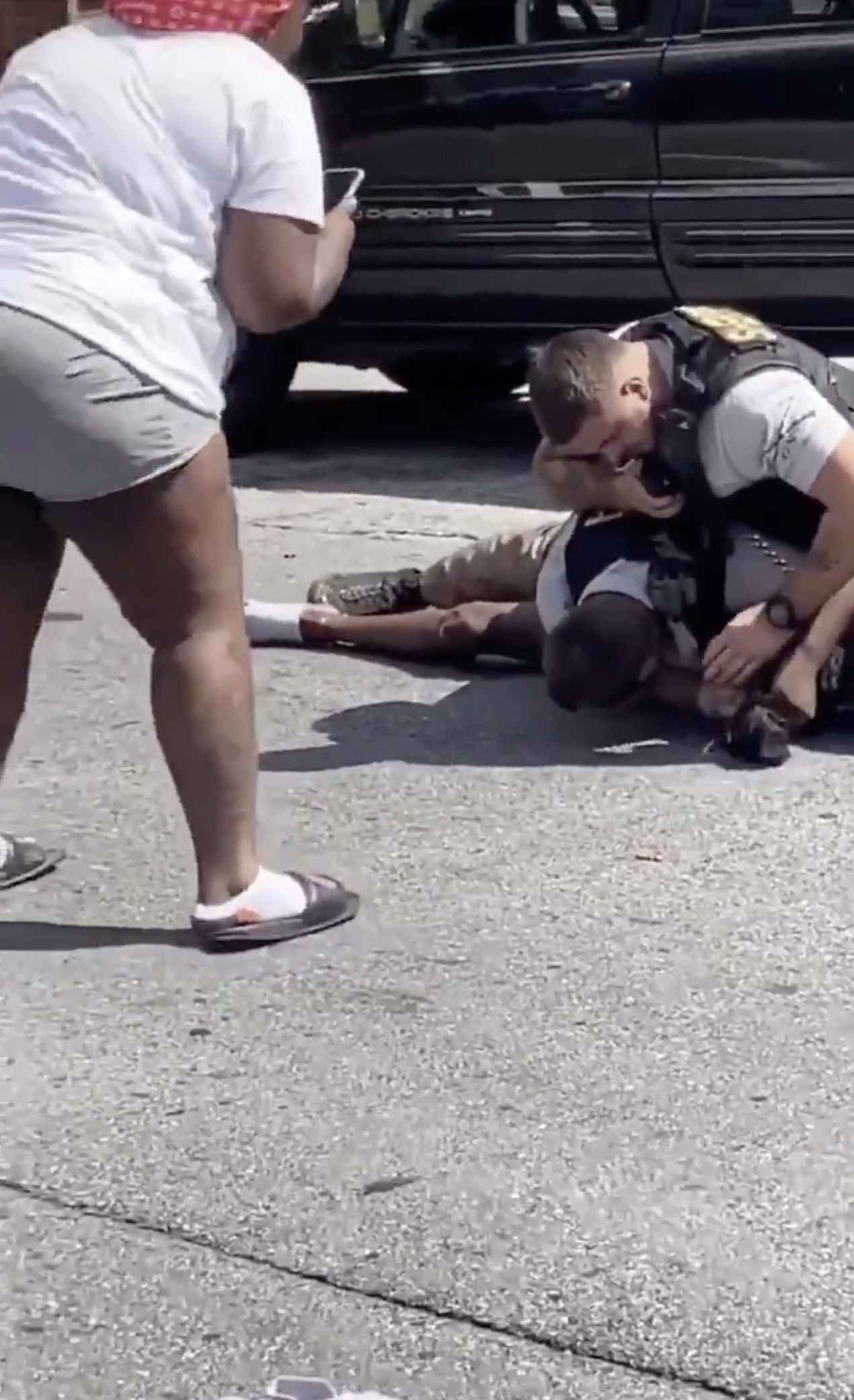 A small boy can also be seen standing near the scene at the beginning, also screaming in panic.

The woman tells the kid to get back into the black car, and he gets in and continues to watch from the passenger window.

The person taking the video yells at the cops throughout the scene to get off the man. 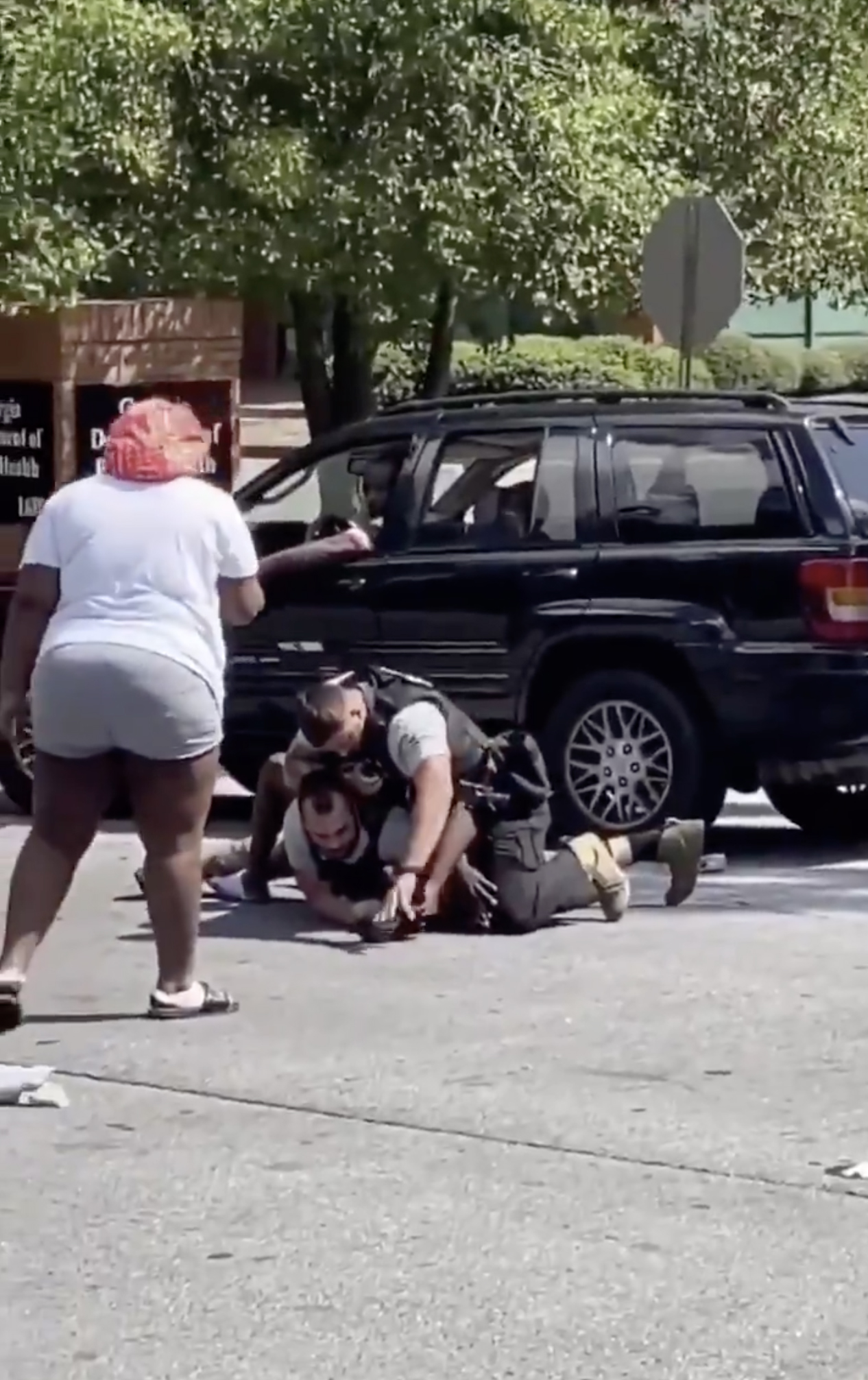 The man's legs thrash and then he goes limp and appears to lose consciousness.

As the two cops try to turn the man over, the person taking the video says, "that's exactly why we don't like f—— cops." 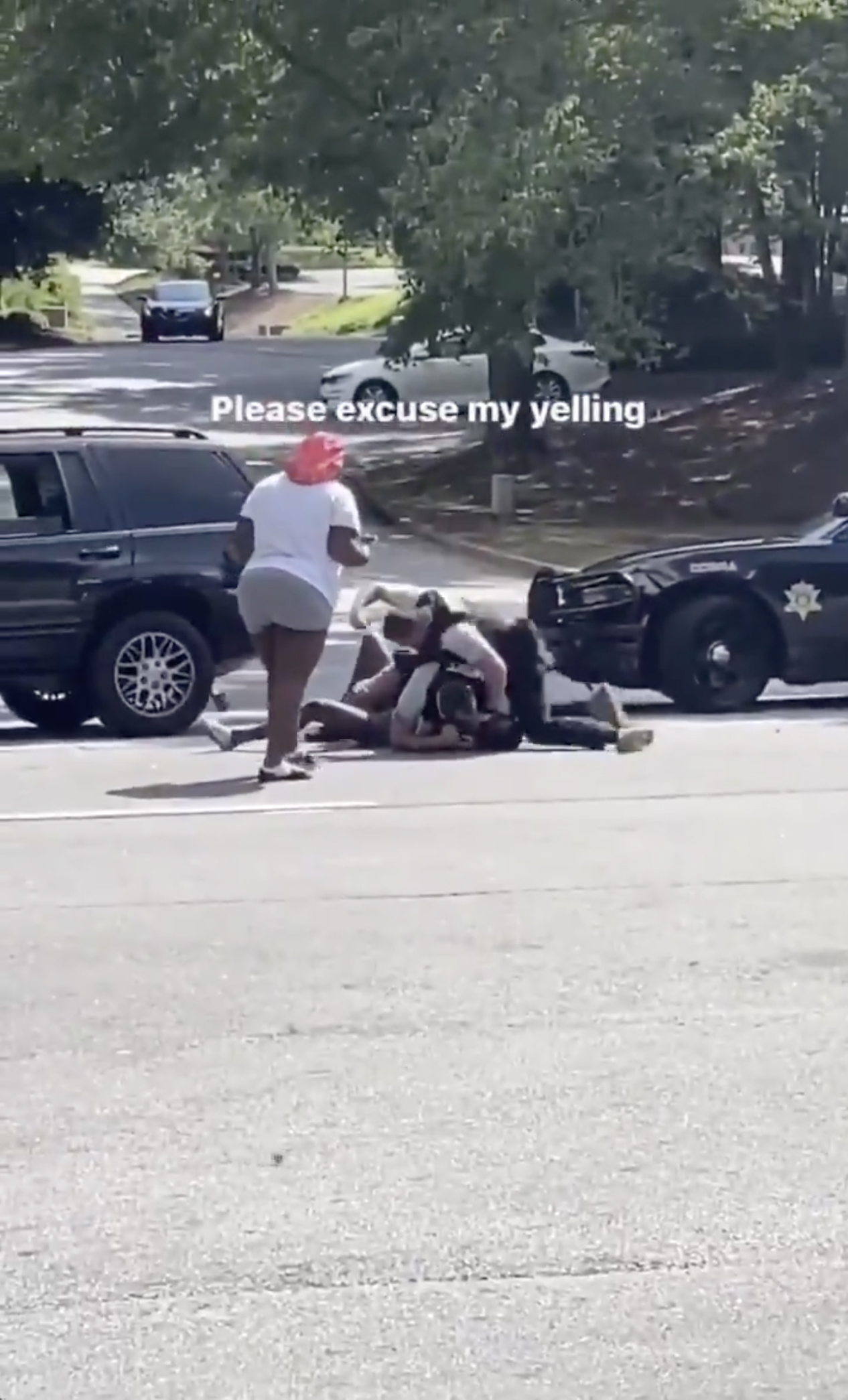 The man ultimately regains consciousness and can be seen trying to shake off the two deputies as they cuff him. 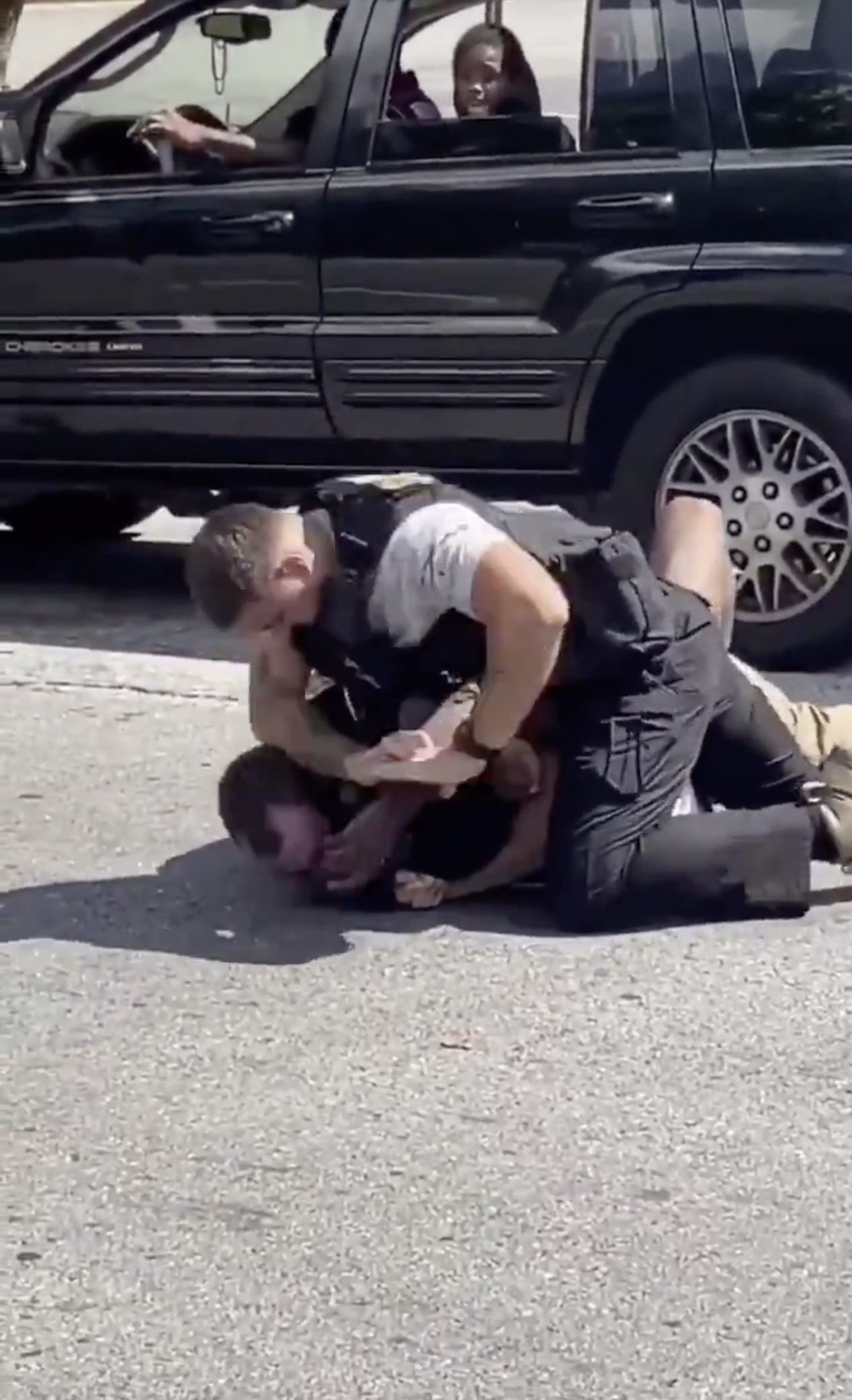 The news comes in the midst of nationwide unrest sparked when a black man, George Floyd, died after a Minneapolis police officer pinned him to the ground and knelt on his neck.

The Clayton County Sheriff's Office said its Internal Affairs Unit is looking into the incident shown in the video on Friday, which went viral.

"The Sheriff has ordered that the Deputy involved be placed on administrative leave pending the outcome of the investigation," the department said in a statement.

The video ends as another cop walks up to the man recording and tells him "back up or you're gonna end up in jail."