First published in The Age on January 9,1969

BUILDING GONE, BUT NOT CHURCH

AT LARA the Rev. Fred Dearnaley led us in to the shell of the Holy Trinity Church of England of which he is vicar.

A thicket of chipped tiles and timbers that had been his roof until the fire, crackled under has feet. 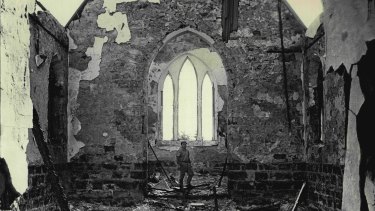 Overhead was the open sky that used to be called the heavens.

“The fire came on us too fast to fight." said Mr. Dearnaley, who wore a green shirt and grimed slacks. "It swallowed up the Sunday school there" – 30 yards away —"and then leaped on the church roof.

"Not burning leaves on the wind exactly . . . more like a great ball of burning gas"

The vicar had a lot of groping to do to find any relics. Altar, pews, organ had vanished. Eventually he uncovered bits of the lectern, on the which the Bible stood for lessons.

"What scripture would I consider appropriate to this moment ?" Mr. Dearnaley said. "Well, I thought of one as I stood in the smoking ruins.

Later I remembered the prophet of old who observed of the human condition that "Man is born unto troubles as the sparks fly upward."

“The building is gone, but the church is still here. After service on Sunday—in the hall—we'll call our first meeting to consider rebuilding.

"In its 91 years the building only had one previous mishap. A window blew out in a whirlwind 31 years ago. 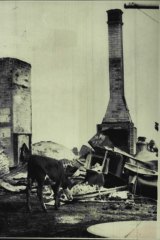 A calf wanders among the wreckage of a burned Lara house.Credit:The Age Archives

"Christians are not meant to get too settled … Earth is 'no abiding city' for them. This fire will stir us up and 'bring us closer together."

As I went out my toe turned a metal plaque. It had been fixed to the electric organ. A Mr. Austin, of Geelong, had donated the organ to remember his sons, James and John. Their deaths were on it:

A few miles along the Geelong Road, we found the carcass of a heavy old grey horse in the corner of a paddock.

Mr. Dick Collinson, of Footscray, the trotting figure, told us at his stud nearby that the carcass had been Grand Monarch, the best sire in Victoria.

"Max McKinnon who was down here having a holiday with me tried to save the horses." said Mr. Collinson. “He set the Monarch free and his own clothes caught fire. He's in Geelong Hospital 45 per cent burned.”

The grey haired owner spoke stoically: "Rich Prince was that badly burned I had to shoot him. Mossman's Nephew burned to death in the stable.”

What was the name of this stud just off the highway, which he had not noticed before, though it had its own half-mile track?

"It's got no name", said Dick Collinson. “I might name it Grand Monarch Lodge.

"Only where would you ever get a stallion like that again, who gave such good service for 15 years?"

At the makeshift dressing station in Lara, the acting Chief Secretary (Mr. Jim Manson) praised the way the fire fighters faced their troubles as the sparks flew.

"Forty-one homes went here," he said. "If they had not worked so well it would have been four hundred."

Mr. Manson was impressed by the work our colleague Sue Preston did at Lara before we got there.

For light relief we told him "The Age" covered all disaster stories in the spirit of the Titanic: "Send the women first."

It was the safest highway anywhere. I said that aloud when I drove down the Geelong highway last weekend, as I have done hundreds of times before in the past 20 years.

Now, here on this safest of highways, six persons had been trapped in terror and killed.

No matter what marvels technology brings, there is never going to be made a world quite safety proof.

For man is born unto troubles as the sparks fly upward.