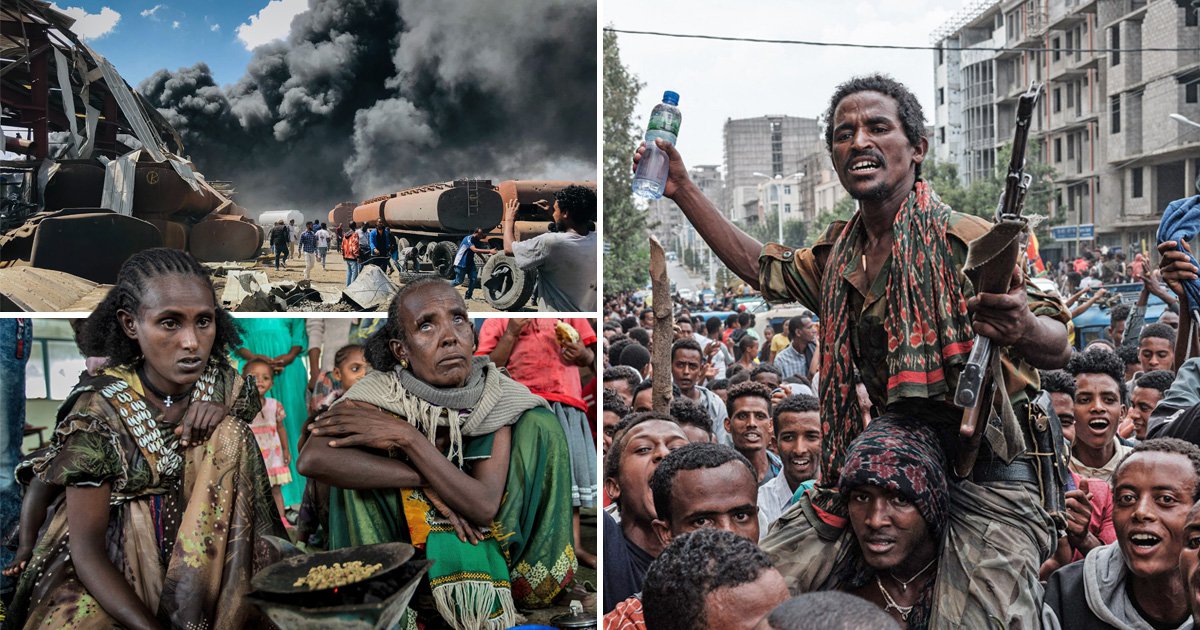 Ethiopia has declared a national state of emergency and told residents to prepare to defend the capital as rival Tigray forces gain ground.

The measure will allow the government to impose a curfew, disrupt transport services and detain anyone suspected of having links with a terrorist group indefinitely.

Local administrations in some areas could also be disbanded and a military leadership could be installed, while any citizen who has reached the age of military service could be called to fight.

‘Our country is facing a grave danger to its existence, sovereignty and unity. And we can’t dispel this danger through the usual law enforcement systems and procedures,’ Justice Minister Gedion Timothewos told a state media briefing.

It comes almost a year to the day that Prime Minister Abiy Ahmed ordered an offensive against regional forces in Tigray, sparking a drawn-out conflict that has seen thousands of lives lost.

A UN report released today found all sides on the battle have violated international human rights, some of which may amount to crimes against humanity.

The report details a host of violations and abuses, including unlawful killings and extra-judicial executions, torture, sexual and gender-based violence, violations against refugees and forced displacement of civilians.

UN High Commissioner for Human Rights Michelle Bachelet said the conflict had been marked by extreme brutality and called for a lasting ceasefire.

‘Civilians in Tigray have been subjected to brutal violence and suffering,’ he said in a press conference on Wednesday.

‘It is vital that all parties heed the repeated calls to end hostilities,’ Bachelet said.

UN officials failed to visit some of the deadliest sites of the war, including the city of Axum, because of security and other obstacles.

Earlier on Tuesday, prime minister Ahmed urged citizens in the capital, Addis Ababa, to take up arms to defend themselves from the Tigray People’s Liberation Front (TPLF).

The nation’s security bureau said that anyone with a firearm should register it now, and it warned that searches of homes and businesses would be carried out to ensure the city’s peace.

The TPLF has claimed it has captured several towns in recent days and said it was considering marching on Addis Ababa, about 380km (235 miles) to the south of their forward positions.

Foreign citizens have been advised to leave the country, with the US warning that security has ‘deteriorated significantly’.

The emergency declaration came as Joe Biden accused the government of ‘gross violations of internationally recognised human rights’ and said he that he was removing Ethiopia from a key US trade programme, clearing the way for further economic sanctions over its failure to end the conflict.

A new roundup of ethnic Tigrayans was seen in the capital on Monday.

The Tigray forces say they are pressuring Ethiopia’s government to lift a months-long blockade on their region of around six million people, where basic services have been cut off and humanitarian food and medical aid denied.

This is ‘perhaps the most egregious humanitarian obstruction in the world’, a senior official with the US Agency for International Development (USAID) told The Associated Press on Tuesday.

‘We’re seeing a campaign of systematic, bureaucratic obstruction blocking assistance into areas occupied by (the Tigray forces) affecting not just Tigray but areas in the neighbouring Amhara and Afar regions now held by the Tigray fighters’, the official said.

The fighters moved into these regions after retaking much of Tigray in June, displacing hundreds of thousands of residents and widening the crisis.

The Tigray forces say they are now linking up with another armed group, the Oromo Liberation Army, with which an alliance was struck earlier this year.

The fighting could reach the Oromo region that neighbours Addis Ababa. Ethnic Oromo once hailed Mr Abiy as the country’s first Oromo prime minister, but discontent has since emerged with the jailing of outspoken Oromo leaders.

Prime Minister Abiy said he ordered the military offensive on November 4 last year in response to an attack on a military base housing government troops there.

The escalation came after months of tensions between Mr Abiy’s government and leaders of the TPLF, which was the dominant political party in Tigray.

Authorities later labelled the TPLF a terrorist organisation and ruled out any peace talks with them.

The government’s renewed offensive in recent weeks, including using airstrikes, has failed to halt the rebels’ territorial gains.