AN employee has revealed a hilarious note their furious boss issued to staff – which appeared to be riddled with grammatical errors.

The angry message, complaining about the offices’ messy toilets, was shared on Reddit and left users bemused. 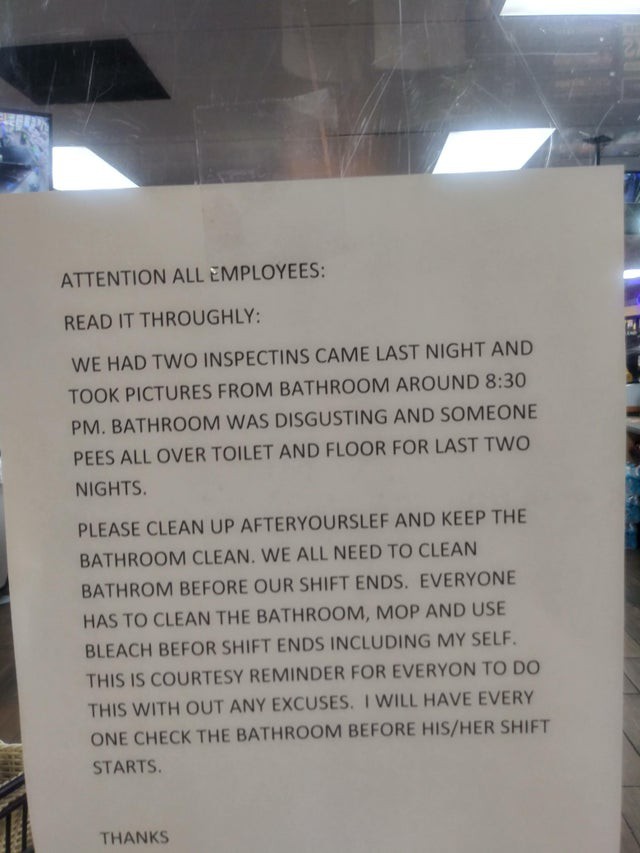 GonzaleeTheSwellGuy, who posted the note online, suggested that there could be a lot of fun to be had with the message that referenced “pee on the floor.”

They even propositioned a game for fellow users to play, captioning the post: “Take a shot for every spelling/grammatical error.”

Reacting, one user wrote: “How do you f**k up this much in a world with autocorrect? Hell, the free word programs have it integrated even. Did they use notepad or something?”

Another wrote: “My brain hurts reading that. It's amazing what spell check can be used for. If it was handwritten it's one thing (and bad enough).

“But that looks like it was used on a word processor…. Which has all types of spell check and other things that would be put to great use.”

While a third added: “I felt like I was having a seizure reading this lol.”

Others even quipped about taking up the employee’s cheeky offer as a another user wrote: “Two minutes ago I was stone-cold sober.

“I’m currently the drunkest I’ve ever been.”

The funny note comes after Reddit users were left baffled by an angry manager’s message to staff that claimed that they were ‘thieving electricity.”

An employee said it was one of a string of nasty notes left by the manager over the past year.

They captioned the post: “One of a seemingly endless series of unreasonable notes left by my boss. It’s great here.”

The message read: “Nobody is entitled to ‘charge up’ any mobile phone or other electrical devices on these premises.

“It is theft of electricity, and you may find a deduction has been made from your pay.

“Phones should be switched off,” it added.