Greg Palkot reports from Jerusalem with the latest on the secretary of state’s Mideast trip.

Egypt has invited Israel, Hamas and the Palestinian Authority for separate talks that aim at consolidating the cease-fire that ended an 11-day war between Israel and the Gaza Strip’s militant Hamas rulers, an Egyptian intelligence official said Thursday. The talks would also focus on accelerating the reconstruction process in Gaza.

“We are seeking a long-term truce, that would enable further discussions and possibly direct talks,” said the official, who had close knowledge of the proceedings that had led to the ceasefire and who spoke on condition of anonymity because he wasn’t allowed to brief reporters.

The 11-day war killed more than 250 people, mostly Palestinians, and caused heavy destruction in the impoverished coastal territory. Preliminary estimates have put the damage in the hundreds of millions of dollars. Egypt was key in mediating a deal between the two sides. 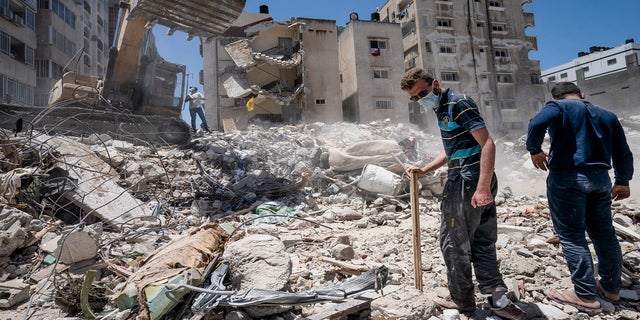 Heavy construction equipment is used to sift through rubble Thursday to uncover valuables before it is transported away from the scene of a building in Gaza City that was destroyed in a recent airstrike. (AP)

He said the talks could start as early as next week, and that Israel has given their initial approval, but that a final agenda is still in the works. He said that there are talks about a possible release of Palestinian prisoners in Israel in return for Israelis held by Hamas. Both issues were discussed with U.S. Secretary of State Antony Blinken during his visit yesterday, and with the Qatari Foreign Minister who was in Cairo on Tuesday.

An Israeli official said that the government is working closely with Egyptian officials ‘to reinforce the cease-fire,’ but would not confirm whether Israeli officials would be attending more official talks soon. He spoke on condition of anonymity because he was discussing behind-the-scenes diplomacy.

Blinken wrapped up a two-day Mideast visit Wednesday also aimed at solidifying the cease-fire and raising money for reconstruction. One of the U.S. goals is to ensure that any assistance be kept out of the hands of Hamas, which opposes Israel’s right to exist and which Israel and the U.S. consider a terrorist group.

The Egyptian official said one possible mechanism for ensuring that is an international committee led by Egypt or the United Nations that would oversee the spending.

Abdelatif al-Qanou, a spokesman for Hamas, confirmed that the group’s leader Ismail Haniyeh would visit Cairo next week and that the group is open to discussing a prisoner swap.

El-Qanoua said the talks in Cairo would also address ways to achieve Palestinian unity between those in Gaza and Israeli-occupied areas of the West Bank.

There was no immediate comment from the Palestinian Authority on its attendance.

The Gaza Strip has been governed by Hamas since the group seized power from the Palestinian Authority in 2007, which resulted in a tight blockade by Israel and Egypt. Since then, Palestinian President Mahmoud Abbas has governed autonomous areas of the Israeli-occupied West Bank and has limited influence in Gaza.

The war was triggered by weeks of clashes in Jerusalem between Israeli police and Palestinian protesters in and around the Al-Aqsa Mosque, built on a hilltop compound revered by Jews and Muslims that has seen several outbreaks of Israeli-Palestinian violence over the years. The protests were directed at Israel’s policing of the area during the Muslim holy month of Ramadan and the threatened eviction of dozens of Palestinian families by Jewish settlers.