Doctors who visited a Melbourne aged care home amid the country’s deadliest coronavirus outbreak say they feared those left behind when staff were removed would starve to death as the virus tore through the facility, killing 45.

Aspects of the treatment of aged care residents and details of a year-long investigation were laid bare for the first time in the Coroners Court on Wednesday as the court prepares to hold a month-long inquest into the deaths. 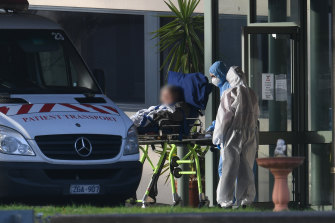 The names of 50 St Basil’s Homes for the Aged residents who died during the outbreak in July and August last year – 45 from COVID-19 – were read out during the hearing.

“As devastating as these numbers are, they don’t tell the whole story,” Peter Rozen, counsel assisting the coroner, said. “Evidence collected by the court … suggests certain features of the home, its management and the way the outbreak was addressed by external agencies that combined for the tragic outcome that materialised.” 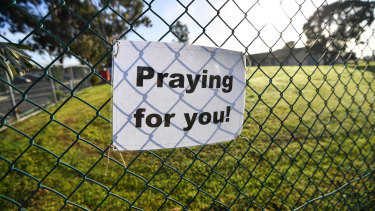 A sign outside St Basil’s during the crisis. Credit:Joe Armao

Mr Rozen said St Basil’s manager Vicky Kos and St Basil’s chairman Kon Kontis had declined to take part in investigations and would need to be compelled to give evidence at the inquest.

The hearing was told of COVID-19 spreading from hotel quarantine in mid-2020, sparking the second wave of the virus.

In early July last year, an employee at St Basil’s, a 150-bed Greek Orthodox aged care home in Fawkner, tested positive for the virus before it spread throughout the facility to a further 93 staff and to 94 residents.

On Wednesday, State Coroner John Cain heard that the staff member returned to work for a further two shifts while awaiting her results following confusion over isolation protocol and company policies.

Mr Rozen said witness statements showed the staff member told colleagues on July 5 that her family had sore throats and that they lived in a high-transmission area and were going to get tested. Despite this, the employee had continued to work without personal protective equipment and without informing management of her pending test results, believing she could work if asymptomatic, the court heard. She tested positive on July 9.

According to the federal government’s aged care infection control policy, Mr Rozen said, if any outbreaks occurred homes must notify the federal Health Department, which would then implement a case manager and standby replacement staff.

But Mr Rozen said investigators had found that when Ms Kos learnt a staff member had become infected, she allegedly failed to notify the department, instead calling the coronavirus hotline.

“The Commonwealth Department of Health only found out about the St Basil’s outbreak five days later,” he said.

In subsequent weeks, as the virus continued to spread throughout the aged care home, the hearing was told, government agencies began to discuss standing down the entire St Basil’s workforce and bringing in replacement staff.

But records showed that when doctors were first notified of the idea at a meeting on July 20, 2020, they warned of a potential “disaster”.

The following day, after staff were sent home following a direction from the state’s Chief Health Officer, health authorities said the facility descended into total disarray, with residents left malnourished and dehydrated and others left lying on the floor.

“Many died during the ensuing week from COVID-19,” Mr Rozen said.

He said the basic needs “of the many highly dependent residents were neglected to a point that a number presented at hospital dehydrated, malnourished, suffering from serious pressure sores and in very poor general health, in addition to being COVID-19 positive.”

The St Basil’s outbreak was not the first large-scale COVID-19 outbreak in an Australian aged care facility. It followed a major cluster in Sydney in April 2020 at Newmarch House, where 19 residents died.

“One might assume that by July 2020, the authorities and the operators of our aged care services would have learned the lessons of that outbreak and have been better prepared than Newmarch House had been,” Mr Rozen said.

“Sadly for the residents at St Basil’s and their families, the evidence in this inquest suggests that these lessons had not been learned. Ultimately, 94 residents and the same number of staff were infected by COVID-19 at St Basil’s.”

John Karantzis, who is representing many of their families, said it was imperative those involved in the inquiry appreciated the level of trauma that had been caused.

“We have to remember that over 50 people died. We are talking about real people … left to starve and to die alone,” Mr Karantzis said.

“We have people who continue to grieve over the conditions these people died in.”

Mr Cain conveyed his sympathies to those families and said he was acutely aware they were looking for an explanation of what happened and why.

“It’s hard to imagine a more difficult and distressing situation for all of you,” he said.

The coroner said he planned to examine what policies and procedures were in place during the outbreak, what was followed, the qualifications of staff and how residents were treated in the 10 days after staff were removed.

The matter will return to the Coroners Court in September.

Stay across the most crucial developments related to the pandemic with the Coronavirus Update. Sign up for the weekly newsletter.