A violent dad who left his two-year-old son severely brain-damaged by smothering him has been jailed for life following his death 18 years after the attack.

Alan Bird, 48, received the life sentence today with a minimum eight-year term after a jury convicted him following a trial at Leeds Crown Court last week.

The abattoir manager inflicted permanent and irreparable brain damage on Lewis Turner, 19, by suffocating him in an attack in 2001 when his son was just two years old.

He had already served an eight-year prison sentence over this initial attack after he pleaded guilty to inflicting grievous bodily harm with intent over the assault. 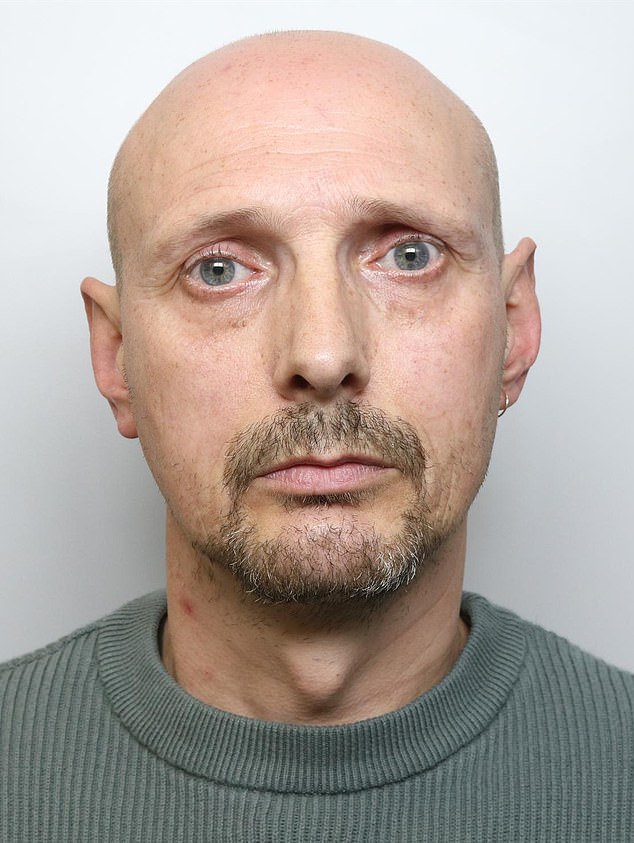 Alan Bird, 48, (pictured) received a life sentence today with a minimum eight-year term after a jury convicted him of being criminally responsible for his son’s death following a trial at Leeds Crown Court last week 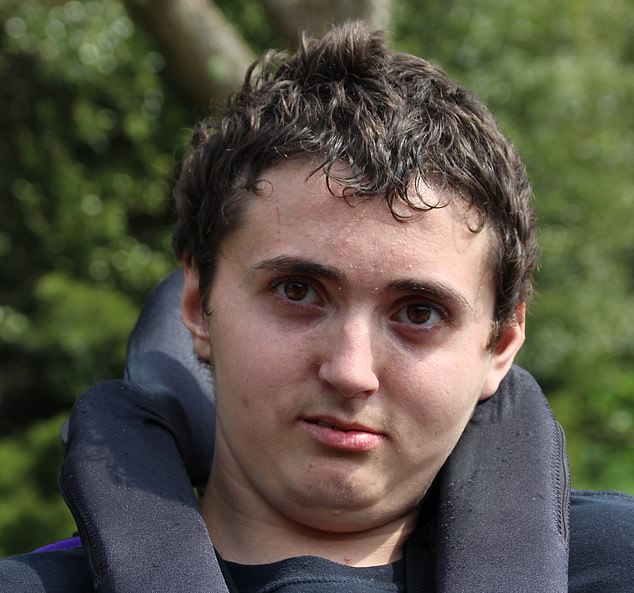 Lewis Turner, 19, (pictured) was found dead at the home of his adoptive parents in Leeds in July 18, 2019. Lewis had been left with permanent brain injuries after being suffocated by Bird, his natural father, at their home in Dewsbury in 2001 when he was two years old

But he was rearrested and put on trial for murder after Lewis’s death in July 2019.

Prosecutors said he is criminally responsible for his death and a jury returned a unanimous guilty verdict on March 22.

Sentencing him today, Mr Justice Jacobs told 48-year-old Bird: ‘Lewis, as a consequence of your attack, had suffered irreversible brain injury that left him with profound problems.

‘The jury were sure that your original actions in 2001 were a significant cause of Lewis’s death in 2019.

‘In July 2002 you pleaded guilty at this court to inflicting grievous bodily harm with intent and an offence of child cruelty.

‘That reflected the generally cruel manner in which you treated him before you smothered him.’

Jurors heard how Lewis developed a ‘myriad of conditions’ which included cerebral palsy as a result of Bird’s attack.

His speech, hearing and sight were impaired and he had to be fed through a tube.

Lewis was found dead on July 18, 2019, at the home where he lived with his adoptive parents in Tingley, Leeds.

The cause of death was given as peritonitis caused by an infection from his feeding tube.

Bird was charged with murder following Lewis’s death as there is no time limit as to how long someone remains ‘criminally responsible’, the court heard.

Prosecutor Richard Wright QC told the jury: ‘The death of Lewis Turner was not some freak infection that took the life of a healthy boy.

‘It was instead the final consequence of a deliberate assault on Lewis by Alan Bird. 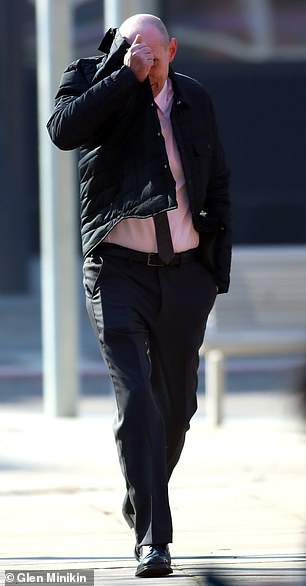 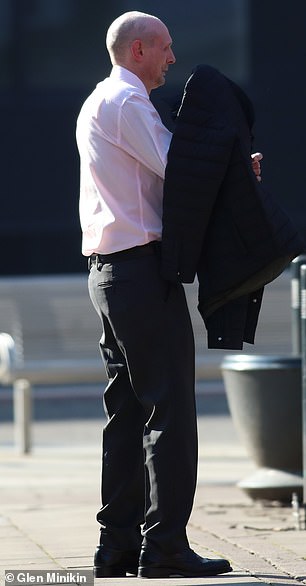 Bird (pictured at Leeds Crown Court for his trial) was Lewis’s natural father, and he attacked his son on the night of September 29, 2001, when he was just two years old. The attack took place at their home on Thorn Avenue, Dewsbury, West Yorks. Paramedics found Lewis covered in bruises and ‘deathly pale’ when they were called to the property

‘His feeding tube caused the infection to develop.

‘He only had that feeding tube as a direct consequence of the defendant attacking him.’

Bird was Lewis’s natural father, and he attacked his son on the night of September 29, 2001, when he was just two years old.

The attack took place at their home on Thorn Avenue, Dewsbury, West Yorks.

Paramedics found Lewis covered in bruises and ‘deathly pale’ when they were called to the property. 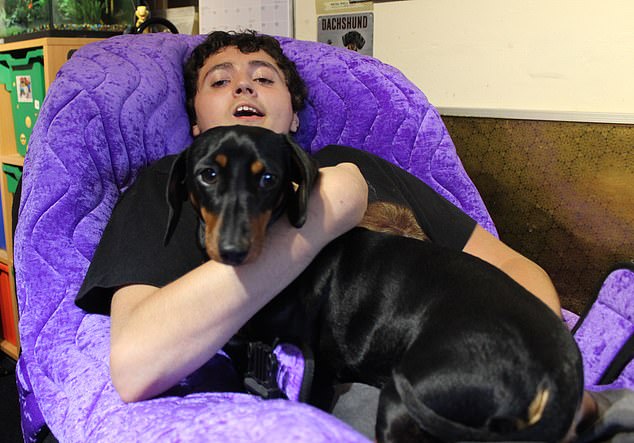 Justice Jacobs handed Bird a life sentence, with a minimum eight-year term, for the killing of the youngster

He was rushed to hospital where a scan revealed he had suffered the devastating injuries as a result of his brain being starved of oxygen.

Bird later admitted to a social worker that he was responsible for causing the injuries and had done so by holding a pillow over the child’s face for a few minutes.

But a professor of gastrointestinal surgery – who conducted an independent investigation following Lewis’s death – found his NHS care to be ‘faultless’.

Bird’s barrister, Jamie Hill QC, said his client had not committed any further offences since being released from prison 15 years ago. 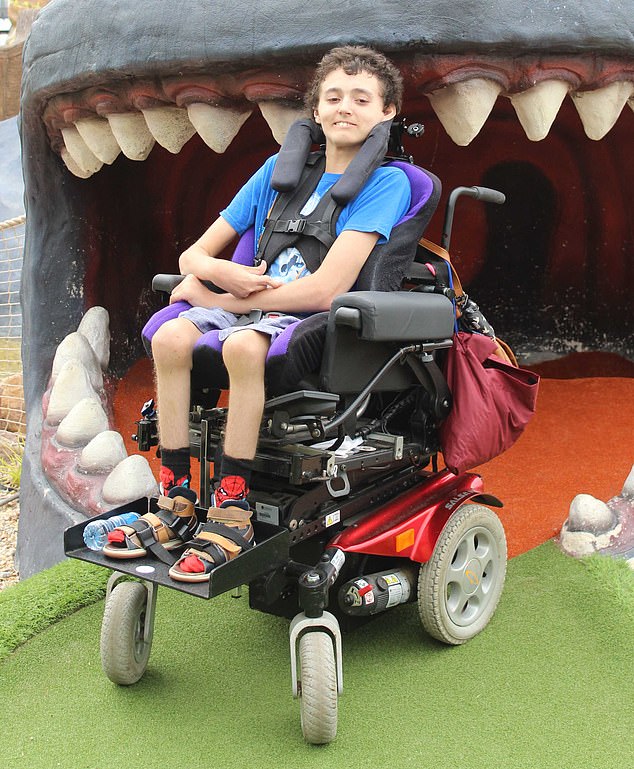 ‘He has been managing an abattoir in Batley and has provided for his most recent wife and her teenage children.’

But despite these pleas, Justice Jacobs handed him down a life sentence, with a minimum eight-year term.

He also praised Lewis’s adoptive parents for the care they had given him throughout most of his life.

He said: ‘Lewis led what most people would regard as a terrible life.

‘While that statement is true, it overlooks the fact that following his profound injuries he was cared for with a devotion that few could match.’