Charlotte: Mysterious swirls found atop a frozen Alabama creek have challenged meteorologists and rattled social media, with some likening the formations to alien-created crop circles.

The hypnotic spirals were discovered February 18 spread across Anderson Creek, a 200-metre-wide tributary of the Tennessee River in north Alabama.

Wynelle Kirkham of Rogersville, 60 kilometres of Huntsville, shared multiple photos of the circles on Facebook, with only a one word comment: “Wow!” 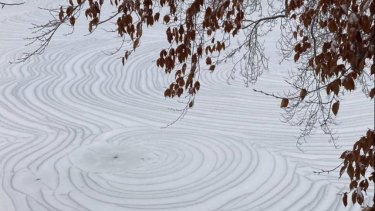 Ice swirls at Anderson Creek in Rogersville, in Alabama.

“First thing I do in the mornings when I get up is open our shutters to look at the water from our bedroom window. I was so surprised,” Kirkham told McClatchy News.

“It appeared a bit frightening, since we had no idea what caused it. We quickly went outside onto our deck and then to our lower deck to see this amazing sight. It looked like crop circles you might see when you are looking from an airplane.”

The Kirkham home sits atop a 20-metre bluff, giving her an aerial vantage point. Her photos show the designs were spread as far as she could see, with the circles starting big then growing progressively smaller, like the rings on a bull’s eye. 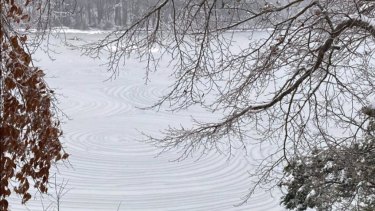 Ice swirls at Anderson Creek in Rogersville, in Alabama after a freeze.

It didn’t take long for local TV stations to pick up on the mystery. Some people said the circles had to be man made, while others suggested – or maybe joked – aliens were involved.

“This is a new phenomenon to me,” neighbour Mary Jean Crisp posted. “It’s as if somebody was pitching stones while the water froze.”

Kirkham and her husband, Mark, have lived along the creek 15 years and she says this is the first time they’ve seen such formations.

The region has experienced intense cold in recent weeks, and temperatures were below zero Celsius the night the circles appeared. She shared her photos with a local TV meteorologists, hoping they could explain how extended cold might have caused the phenomenon.

WAAY 31 chief meteorologist Kate McKenna offered a couple of “theories” during a February 18 broadcast, while using the term “crop circles” to describe the swirls.

“What I think is the best explanation for this – and I say ‘think’ because I’ve been asking other meteorologist friends what their theory is on this,” McKenna reported.

“This pattern occurs when moving water forces the forming ice to slowly rotate,” Spann wrote. “Shear is involved … When on one side of the creek you have water that’s moving faster than on the other side causing the ice to form in swirls.”

Not everyone was convinced, however.

“Nice try, James Spann, but I know crop circles when I see ’em,” William B White wrote on Facebook.