Paris: The number of new single-day coronavirus infections in France exceeded the 20,000-barrier for the first time on Friday, health ministry data showed on Friday.

The ministry reported 20,330 new infections, taking the cumulative total to 691,977 since the start of the year. In the past two days the ministry had reported more than 18,000 daily new confirmed COVID-19 cases. 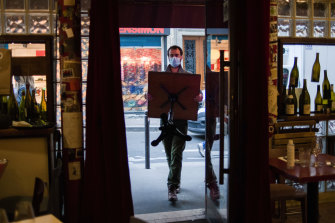 With cases on the rise in France, local restrictions are being imposed, including on bars and restaurants.Credit:Bloomberg

It was a worrying trend mirrored across Europe, with infections also spiralling out of control in the UK.

Emergencies expert at the World Health Organisation (WHO) said that European governments must take decisive action to shut down transmission of the coronavirus to avoid more painful lockdowns.

Europe surpassed 100,000 daily reported COVID-19 cases for the first time on Thursday, after countries including France, Russia and the UK saw no respite from the mounting number of infections every day in the past five.

"There are no new answers. We know what we need to do," WHO's Mike Ryan told a news briefing in Geneva.

"It is though sad to see many countries in Europe experiencing a rapid rise in cases and governments do have to take decisive action in order to try and shut down transmission."

Older populations and other vulnerable groups likely to suffer severe disease must be protected, he added.

"We need to be very, very careful with any forms of mass gatherings that bring people together at close quarters," he said.

WHO on Friday reported a record one-day increase in global coronavirus cases, with the total having risen by 350,766 in 24 hours.

In all more than 36.58 million cases have been reported globally and more than 1 million people have died.

The problems in France have been echoed across the English Channel, where the British government is also struggling to get a handle on infections.

The average daily number of COVID-19 cases in England has doubled in a week, a survey showed on Friday, as scientists warned that action was needed to avert a calamitous and unnecessary spike in deaths.

New cases of COVID-19 in England were around 17,200 per day in the latest week to October 1, compared to 8400 per day in the previous week, an infection survey by the Office for National Statistics (ONS) said, while another population survey said daily infections could be as many as 45,000.

Prime Minister Boris Johnson is seeking to tackle a second wave of COVID-19 with local measures in England in an effort to avoid another national lockdown. Scotland, Wales and Northern Ireland have also implemented restrictions.

But the surveys in England, which feed into government decision-making, paint a bleak picture, and government scientists warned the epidemic was still growing despite a dip in the reproduction number.

"We are back to choices faced in the March … Don't act slower than the speed of the epidemic," Jeremy Farrar, director of the Wellcome Trust and member the government's Scientific Advisory Group for Emergencies (SAGE), said in a tweet.

The ONS said an estimated 224,400 people in England had COVID-19 in the latest week, or 1 in 240 people, a 92 per cent increase in infections compared to the previous week.

Another population study, run by Imperial College London and Ipsos Mori, showed that 1 in 170 people in England had the virus between September 18 and October 5, with 45,000 new infections each day.

"Our robust findings paint a concerning picture of the growing epidemic across England," said Paul Elliott, of Imperial's School of Public Health.

"While certain areas are worse affected, if left unabated then infection trends will follow nationwide and could lead to high levels of unnecessary death and illness from the disease."

The United Kingdom reported 13,864 confirmed cases of COVID-19 on Friday, down a fifth from a day earlier.

The number of deaths from the virus increased by 109 to 32,630, the highest in a week but below highs of around 150 seen earlier this month.

Get our Coronavirus Update newsletter for the day’s crucial developments and the numbers you need to know. Sign up to The Sydney Morning Herald’s newsletter here and The Age’s here.