A Japanese court ruled Wednesday the government’s ban on same-sex marriages is unconstitutional, recognizing the rights of same-sex couples for the first time in the only Group of Seven country that doesn’t acknowledge their legal partnership.

Even though the court dismissed the plaintiffs’ demand for government compensation, the precedent is a major victory for same-sex people and could affect similar lawsuits pending around the country.

The Sapporo District Court said sexuality, like race and gender, is not a matter of individual preference, therefore prohibiting same-sex couples from receiving benefits given to heterosexual couples cannot be justified.

“Legal benefits stemming from marriages should equally benefit both homosexuals and heterosexuals,(asterisk) the court said, according to a copy of the summary of the ruling. 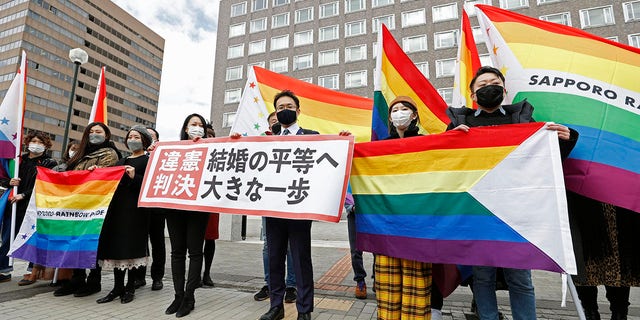 Plaintiffs’ lawyers and supporters hold rainbow flags and a banner that reads: "Unconstitutional judgment" outside Sapporo District Court after a court rule, in Sapporo, northern Japan, Wednesday, March 17, 2021. The court ruled the government’s ban on same-sex marriages is unconstitutional, recognizing the rights of same-sex couples for the first time in the only Group of Seven country that doesn’t acknowledge their legal partnership. (Yohei Fukai/Kyodo News via AP)

Judge Tomoko Takebe said in the ruling that not allowing same-sex marriages violates Article 14 of the Japanese Constitution prohibiting discrimination “because of race, creed, sex, social status or family origin.”

Under Japanese law, marriage should be based on “the mutual consent of both sexes,” which is currently interpreted as allowing marriage only between a man and a woman.

The ruling does not mean an immediate change to the government policy, but could influence decisions on other lawsuits pending and prompt calls for the government to change the law.

While awareness and support for LGBTQ people is rising in Japan, discrimination persists. Same-sex couples cannot inherit their partner’s houses, property and other assets, or have parental rights to any children. More municipalities have enacted “partnership” ordinances so same-sex couples can more easily rent apartments, but they are not legally binding.

In a society where pressure for conformity is strong, many gay people hide their sexuality, fearing prejudice at home, school or work. Transgender people also have difficulty in a society where gender identity is highly specific.

The movement for LGBTQ equal rights has lagged because people who don’t conform have been largely marginalized.

The Sapporo District Court dismissed the demand by six plaintiffs — two male couples and one female — that the Japanese government pay 1 million yen ($9,100) each for the difficulties they had to suffer from not being able to legally marry.

But the Sapporo court’s ruling that the government’s ban was unconstitutional is seen as a major step forward for the plaintiffs and their supporters, setting a precedent for similar court cases and raising their hope for a legal change.

“I hope this ruling serves as a first step for Japan to change,” said one of the women, who only identified herself as “Plaintiff No. 5.”

Four other lawsuits are pending in Tokyo, Osaka, Nagoya and Fukuoka.

Japan’s refusal to issue spouse visas to partners of same-sex couples legally married overseas has been a growing problem, forcing them to temporarily live separately.