Facebook has banned the sharing or viewing of our news articles on its platform. For independent journalism straight from the source, download our app and sign up to our newsletters.

A Victorian Coroner is calling for fresh brain research into the effects of blows to the head in sport following the death of AFL champion Danny Frawley.

Handing down her findings into Frawley’s death on Tuesday, Coroner Paresa Spanos revealed a post-mortem analysis of Frawley’s brain found he had low-stage chronic traumatic encephalopathy (CTE) – a form of brain disease linked to repeated blows to the head.

She said researching the impacts of contact sports on the brains of AFL players could save lives with there currently being “insufficient knowledge” about the extent to which CTE produces neurological dysfunction, in part because of a lack of research in Australia and internationally. 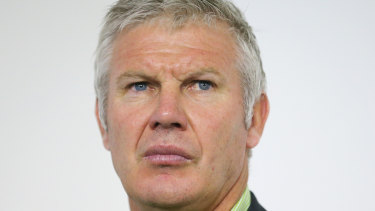 A diagnosis of CTE can only be determined after death and is associated with mood and behavioural changes and occasionally cognitive and memory impairment.

“Mr Frawley’s mental state began deteriorating in the months before his death and appeared to coincide with ceasing his medication and several psychosocial stressors,” Mr Spanos wrote.

“Like many players, Mr Frawley began his football career in his formative years, and likely experienced head trauma while his brain was still developing. As such, it is difficult to evaluate the contribution of CTE to personality, behaviours, any cognitive deficits, or emotion over a lifetime.”

“CTE can only be diagnosed post-mortem, it is impossible to establish at what point CTE began and whether this coincided with any changes in mood or behaviour.”

Mr Spanos did ultimately find that CTE was a potential contributor to the depression that Frawley suffered in the years preceding his death.

Frawley – a former AFL player, coach and football commentator – took his own life in 2019. He was 56.

The coronial investigation found Frawley had a history of mental health issues and in the period immediately preceding his death had experienced personal and professional stressors and an exacerbation of the anxiety and depression he had been suffering for five years.

Frawley played 240 AFL games between 1984 to 1995 and was captain of the St Kilda Football Club for nine seasons. During his career, he sustained about 20 concussions, including losing consciousness, severe headaches and vision problems, the investigation found.

As part of her recommendations, Ms Spanos is calling on the AFL and AFLPA to actively encourage players and, their legal representatives after their death, to donate their brains to the Australian Sports Brain Bank (ASBB) for research into CTE.