Washington: The press conference was a friendly affair until the very end.

US President Joe Biden was walking off the podium when he heard CNN reporter Kaitlan Collins shout out a question: why was he so confident that Russian President Vladimir Putin would change his behaviour after their first presidential meeting in Geneva?

Biden, who had appeared in a good mood up to that point, snapped. 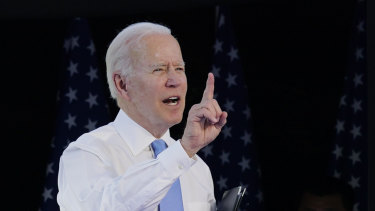 A less-than-sunny Joe Biden speaks to the news media. Credit:AP

“What the hell?” a visibly annoyed Biden shot back, pointing his finger to the sky. “What do you do all the time? When did I say I was confident?”

Collins pressed Biden on how he could call the meeting a success given Putin had shown no signs of contrition for human rights abuses in Russia and his meddling in US affairs.

“If you don’t understand that, you’re in the wrong business,” Biden responded. 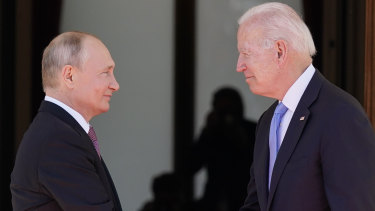 The summit finished significantly earlier than expected and resulted in only one tangible outcome: the return of US and Russian ambassadors to their diplomatic posts.

The leaders also expressed interest in developing a “strategic stability dialogue”: essentially they agreed to talk about having talks.

Biden’s testiness underscored the fact that he does not want to be branded a failure if tensions with Russia flare up down the road. He wants to create space to work with Putin on discrete issues such as climate change and Iran’s nuclear program, but isn’t announcing a “reset” in US-Russia relations.

In the end, the summit was neither a triumph nor a disaster for either leader. It was certainly not an embarrassment on the scale of Trump’s 2018 meeting with Putin in which he deferred to his Russian counterpart over his own intelligence agencies on the question of election meddling.

Putin’s press conference was predictably full of “whataboutism” as he tried to deflect any questions about Russia’s flaws by talking about gun violence and civil unrest in America, as well as the controversial Guantanamo Bay detention camp.

For all the fears that Biden could deliver Putin a propaganda victory by agreeing to meet with him, the event also underlined the Russian leader’s weaknesses.

An American reporter asked Putin why so many of his political opponents are “dead, imprisoned, or jailed” before adding: “My question is, Mr. President, what are you so afraid of?”

He didn’t have an answer.

And while Putin said he saw a “spark of hope” in Biden’s eyes, he also avoided predicting any grand thaw in US-Russia tension.

“There is no happiness in life,” he said, quoting Tolstoy. “There’s only a mirage on the horizon, so we’ll cherish that.”