Britain’s most fanatical hate preacher is urging the Taliban to impose a stricter form of Islamic justice – including stoning adulterers, chopping off the hands of thieves and lashing anyone caught drinking alcohol.

Anjem Choudary, 54, who inspired a generation of jihadi fighters and dozens of terrorist murders, also wants to ban music and mixing between sexes, and says non-Muslims should pay an ‘infidel tax’.

His outpourings are included in an extraordinary 3,500-word treatise entitled Sincere Advice To The Leadership Of The Taliban. 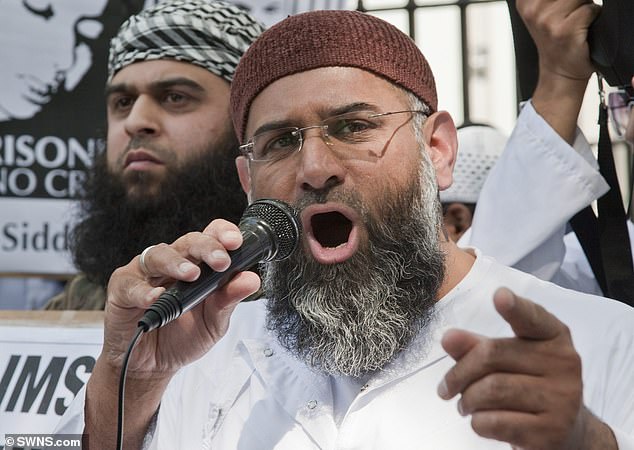 Choudary, jailed five years ago for supporting the Islamic State terror group, was banned from speaking in public following his release 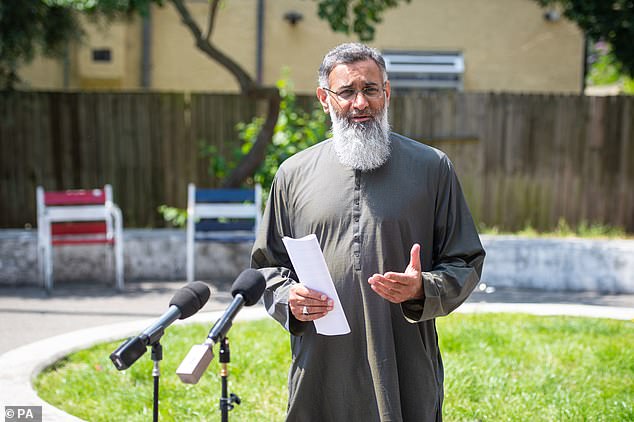 In it, the firebrand cleric, from Ilford, East London, calls on Afghanistan’s new government – which has tried to project a more moderate image – to expunge all traces of Western culture and ban ‘useless pursuits such as music, drama and philosophy’.

Choudary, jailed five years ago for supporting the Islamic State terror group, was banned from speaking in public following his release. But the order was lifted last month, leaving him free to spread his hate.

Expressing his opinions on the encrypted social media network Telegram, Choudary appeared to suggest British and American forces were legitimate targets, urging Taliban fighters to point their guns at ‘occupying forces’ and anyone who ‘stands in the way of implementing the rule of Allah’.

Of the many barbs that come his way, the one that wounds Anjem Choudary the most is the word ‘coward’.

For more than two decades, the father of five has been at the heart of UK jihadism, spouting hate without censure and mocking British justice.

It is often said that the 54-year-old extremist, pictured right, enjoys egging on others to wage jihad but has little stomach for the fight himself.

Instead, he prefers to remain in his comfortable East London home playing the bogeyman and carping about Britain – all while claiming a string of benefits.

Some of his pronouncements are comically provocative. Once he promised that ‘a flag of sharia’ would fly over Downing Street, said Buckingham Palace should be renamed Buckingham Masjid, the Arabic word for mosque, and he accused the Queen of not washing properly and having only ‘two baths a year’. But while it is easy to cast Choudary as a cartoonish, ludicrous figure, he is manifestly dangerous – a ‘deeply pernicious, destabilising influence’ in the words of one former Minister.

He inspired some of the country’s most infamous Islamist killers, including Khuram Butt, leader of the London Bridge attacks, and the men who killed Fusilier Lee Rigby in Woolwich in 2013.

Justice finally caught up with Choudary in 2016 when he was jailed for five and a half years for supporting the Islamic State terror group. To the frustration of those who understand the threat he represents, he was freed on licence after serving half his sentence.

And with world leaders beseeching the Taliban not to isolate Afghanistan, Choudary advises closing down the country’s embassies abroad, even in Muslim countries, and expelling the United Nations from Kabul.

Any non-Muslims living in Afghanistan, he says, must pay a tax known as ‘jizya’, often referred to as the ‘infidel tax’. This toll ensures they receive protection.

Choudary says the Taliban must enforce strict sharia law, and run only sharia courts, getting rid of existing bodies such as high courts and supreme courts.

Only strict sharia punishments – including chopping off thieves’ hands and stoning adulterers – must be implemented.

He said: ‘The penal code or Hudood is the right of Allah… to cut the hand off the thief, stone the adulterer, implementing capital punishment upon the apostate and lashing those who drink alcohol (all after due court process and evidence) must be implemented without question and hesitation.’

According to Choudary, the level of strictness employed by the Taliban to implement sharia law will determine whether it is ‘truly Islamic’. He said: ‘Muslims around the world must… assess whether this fledgling state is really implementing Islamic law or whether it is just another country choosing Islam to be part of its name that it wishes everyone to call it by.’

Choudary is urging the Taliban to change the name of Afghanistan to Islamic State, which is what IS called its territory once it declared a caliphate. He said: ‘There should be the removal of all borders and an invitation to all Muslims to become citizens of the new Islamic State with the aim to unite the Muslim land of the Indian sub-continent to begin with, to be the precursor of greater unity under the Khilafah [caliphate].’

When Choudary was asked by the MoS if he himself would go to Afghanistan, he said he was unable to because he was on a UN terrorism watchlist and was banned from travelling.

But he said other Muslims could travel to the country, adding: ‘As a Muslim, we believe in Islam and the sharia, so it is a natural thing to live there. Why do Jews gravitate towards Israel?’