An "ambitious" proposal to re-introduce dingoes into the Grampians has angered farmers, with a petition expressing fierce opposition to the idea gaining support among locals.

A 15-year draft plan created by Parks Victoria and three groups of traditional owners to guide the management of the Grampians – known as Gariwerd to its custodians – was released in November and contained a proposal to restore "locally extinct and culturally significant wildlife" such as the dingo and quoll. 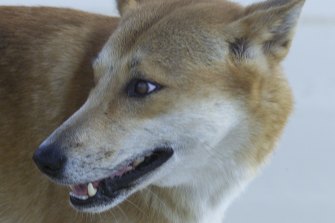 The proposal to re-introduce dingoes into the Grampians National Park has been fiercely opposed by local farmers.Credit:Peter Rae

It outlined a proposal to investigate, with farmers and academic institutions, whether the re-introduction of the native predator could "restore missing ecological processes" and control pest species as well as over-abundant populations of kangaroos and wallabies.

"There are, however, many unknown interactions or outcomes that may result from their reintroduction to the existing state of ecosystems," the plan reads.

"The re-establishment of dingo or dingo-hybrid populations in the Greater Gariwerd Landscape has the potential to cause community concerns due to possible conflicts with grazing. Programs for the re-introduction of dingoes have also been raised by other Traditional Owner groups in other parts of Victoria and are being investigated."

The idea has been fiercely opposed by some of the local farmers, who believe the re-introduction of the predator could threaten their livestock and hurt the multimillion-dollar livestock and wool industry.

John Crawford, who has run Rock-Bank Merino and Poll Merino Stud in Victoria Valley near Dunkeld with wife Rhonda since 1982, started a petition which has garnered over 800 signatures online.

They are hoping to get around 2000 names and present it to the state government.

"In the local community, no matter where I walk, everyone is horrified. Most people thought it was a hoax, that it wasn’t fair dinkum," he said.

The 65-year-old believes the issue is creating a rift between the rural community and Parks Victoria, and is worried about the impact it could have on tourism.

"They’ve just spent millions on a walking track from Dunkeld to Halls Gap, which is going to be a brilliant track, and to see all the Aboriginal culture which is fantastic I think," he said. 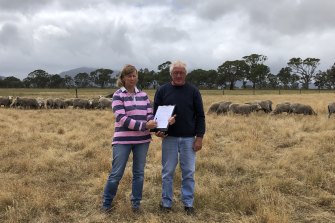 "But no matter who I talk to, they say, I’m not walking in that park with dingoes."

"From a farming point of view to an economic point of view, to the state, and for tourism … I'm hoping common sense will prevail."

Euan Ritchie, an associate professor in wildlife ecology and conservation at Deakin University, said that the concerns of farmers were legitimate. However, he believes there could be a range of ways to minimise the risk to livestock graziers.

"I do think it's a legitimate concern that dingoes do pose a risk to sheep, goats and other livestock, but we also have to be respectful of the wishes of Indigenous and traditional owners who want to have dingoes back on country," he said.

"Traditional owners recognise the issues posed by the potential reintroduction. They themselves say they don't want to disadvantage livestock graziers. But we need to think about the concerns and wishes of multiple people in the community."

"Everyone is aware this is an ambitious proposal and one that poses risk and needs to be carefully managed, but the most important thing is we come together and discuss the concerns and use the best evidence to address those."

He said that dingoes which are neutered and GPS-collared could be monitored to make sure they weren't causing damage for livestock graziers, and strategic fencing could be introduced.

But Mr Crawford said it wasn't realistic to use fencing to try and control dingoes: "That's out of the question and the cost is ridiculous to think you could fence it in".

A joint statement by the three organisations released in November said the draft management plan had identified the deep cultural connection between the Gariwerd landscape and traditional owners, and respected their cultural rights to access country for cultural and economic purposes and practices.

Dingoes are an important cultural species that have "for thousands of years had a symbiotic relationship as semi-wild companions to Aboriginal people", according to the plan.

The regional director of Parks Victoria, Jason Borg, said that they were encouraging people with feedback to get in touch before the January 24 deadline.

“We have heard the concerns from farmers about a proposal in the draft plan to research the potential reintroduction of native and culturally significant species, including dingoes," he said.

“It’s important to remind people that this is a draft plan that we are currently seeking feedback on.”

Feedback can be provided by sending an email to [email protected] or completing an online survey.