Kenja Communications, a spiritual self-help group that stared down numerous allegations against its late founder, has become the only Australian organisation refusing to join the National Redress Scheme for survivors of institutional child sexual abuse.

Its late founder Ken Dyers was only ever found guilty of one charge of sexual assault, which was overturned by the High Court on a technicality. 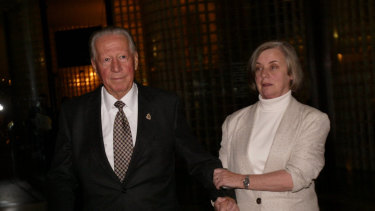 Ken Dyers pictured in 2006 with his partner Jan Hamilton outside court, where he faced multiple charges of sexual assault.Credit:Lisa Wiltse

The organisation has invoked Attorney-General Christian Porter’s position on the historical rape allegation against him, which he denies, to support its position.

Kenja has posted to its website a statement arguing that the same principles cited by the Attorney-General should apply to its decision not to join the National Redress Scheme.

“Anyone can contact the scheme and say they were abused as a child and without due process, in fact it appears without any real process, can receive up to $150,000 in compensation,” the statement said.

“We are of the view that recent events including the Christian Porter case confirm the legitimacy and appropriateness of the position we have taken regarding not joining the National Redress Scheme. In our respectful opinion, if it is proper for the Attorney General to invoke the rule of law, it is also proper for us.”

Mr Porter has strenuously denied raping a woman 33 years ago. Arguing against calls to stand down or hold an inquiry into the allegation, he said: “There are circumstances where someone might absolutely believe something, but it might not be a reliable account. That is actually why we have a justice system. It is why we have courts and the presumption of innocence and burdens of proof.”

The redress scheme was set up in response to the Royal Commission into Institutional Responses to ChildSexual Abuse and provides counselling, compensation and a direct response such as an apology to people who were sexually abused as children. Hundreds of organisations have joined the scheme since it was set up in 2018.

But Kenja, which is run by Dyers’ widow Jan Hamilton, was one of three organisations that had claims against them but had not joined by the January 31 deadline. It is the only one that refused to join on the basis that child sex abuse never took place.

Dyers took his life in 2007 after a new allegation of abuse was raised against him. He was facing 22 separate charges of sexual abuse against two 12-year-old girls at the time, but had been found medically unfit to stand trial.

Social Services Minister Anne Ruston rejected the assertion that the scheme did not have due process, saying no civil or criminal action had been taken in regard to false claims to date.

“It is absolutely astonishing that Kenja Communications has refused to join the scheme and any attempt they make to excuse their position is completely unacceptable,” Ms Ruston said.

The Jehovah’s Witnesses signalled its intention to join the scheme three weeks ago, when it became mandatory for charities to join.

Fairbridge Restored, a British charity that brought child migrants to “farm schools” in Australia for decades up to 1983, declined to join after it went into liquidation and could not meet the forward requirements of the scheme.