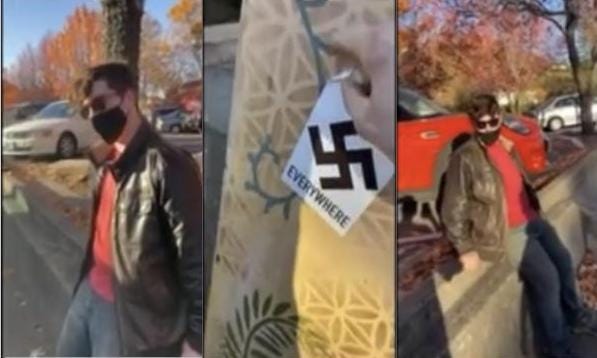 A viral video shows a 21-year-old's encounter on Tuesday with an unidentified man trying to stop him from putting up swastika stickers in a California town, ABC 7 News. reported.

Noah Mohan posted video footage of the incident earlier this week, and it racked up over 100,000 views. Mohan and his girlfriend were walking their dog in Fairfax, California when they came across the white Nazi stickers with the words "We Are Everywhere."

"I tore the sticker off, threw it away, and followed the guy down the street with my phone for about 20 minutes telling him to get the f–k out of my town and to throw that racist s–t away on the way out," Mohan wrote in his Instagram caption of the video.

In the video, Mohan is seen following the man, who wore sunglasses and a face mask, and asks: "Why you putting up Nazi stickers, dude?" The man repeatedly told Mohan that he believes in the "ideology" behind the stickers, to which Mohan responded, "Don't be putting that up in my f–king town bro." Mohan also said in his post that the man was sporting a Nazi pin on his coat.

"For him to come and put up Nazi stickers in a place where he doesn't live and in the middle of the day? Thinking no one would do anything about it? That is crazy to me," Mohan, who said he is half Jewish, told ABC 7 News.

Mohan told the Marin Independent Journal that the stickers the man "posted basically says 'kill me and my family' and that ain't going to slide."

The unidentified man is reportedly a 19-year-old from Livermore, California, ABC7 News reported. According to the Marin Independent Journal, he was released from police custody, but the case was sent to the Marin County DA's office to review potential charges against him.

In his Instagram caption, Mohan said racism should be condemned "at all costs," especially in the Marin County area, which is predominantly white, according to US Census data.

"Racism is alive and growing in Marin county and we need to call it out and condemn it at all costs if we want this to be a safe and peaceful place for people of all skin color, religion, etc.," he wrote.