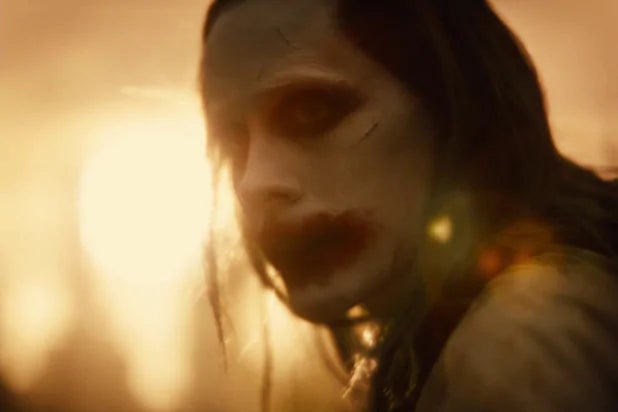 While nearly all of “Zack Snyder’s Justice League” is made up of footage he shot for the film when Zack Snyder was working on it the first time, there are two exceptions: The stuff involving the Martian Manhunter, and a new apocalyptic Knightmare vision of the future that features none other than Jared Leto’s Joker.

In the trailer for “Zack Snyder’s Justice League,” Leto’s Joker made waves for uttering a phrase — “we live in a society” — that originated with memes about the Joker. The fact that the trailer ended on that bit meant it quickly became the main topic of conversation about the Snyder cut that day.

“We live in a society,” the Joker said, with a long pause before finishing the sentence, “where honor is a distant memory.”

Snyder has discussed this scene at length in the run-up to the launch of the movie — he said he wanted to give Ben Affleck’s Batman a chance to share a scene with Leto’s Joker. A real scene, rather than Batman’s very brief run in with Joker and Harley Quinn in “Suicide Squad.” But this might not have been the best way to go about it.

After the whole to-do about the line in the trailer, I was pretty shocked to get to that scene, at the very end of “Zack Snyder’s Justice League,” and not hear those words come out of Joker’s mouth. At first I thought I had just zoned out for part of it — that scene, and the Joker’s monologue in particular, might just be the worst scene in the movie.

In a way, it makes sense to leave it out. This scene, being part of Bruce Wayne’s vision of the future, takes place during an apocalypse scenario in which the resurrected Superman has teamed up with the cosmic big bad Darkseid to take over the world and turn it into a wasteland. So, in fact, there is no longer a society for the Joker, or anyone else, to even live in.

But the absence of the line highlights just how obnoxious this scene is on its own. Even without a completely unnecessary meme reference, this scene is very, very bad. Both of the new bits that Snyder made specifically for this version of “Justice League” are the worst parts of the movie. And that’s really saying something, because the four-hour runtime of “Zack Snyder’s Justice League” means we got more than a few pieces that maybe should have been left on the cutting room floor.

And maybe that’s where this scene should have gone as well. The Joker’s cameo is brutally terrible, and it doesn’t even make sense. We just get Leto delivering a lifeless monologue about Batman’s volatile emotional state for what feels like an hour. Then Joe Manganiello’s Deathstroke asks Batman if they really need him — and Batman swears they do.

But then the evil Superman shows up. Everybody — the Flash, Cyborg and Mera are also there — get into their fighting stances as “Zack Snyder’s Justice League” cuts to each of their determined faces. And then we see the Joker, standing off to the side chuckling to himself because he has no apparent utility in a situation that involves gods punching each other really hard.

One possible explanation is that it’s just dream logic. The Joker is one of Batman’s demons, and so it would make some kind of sense that he would come up in Bruce Wayne’s nightmares. But I don’t think this is just a dream. Or at least I don’t think “Zack Snyder’s Justice League” was setting it up as one.

Batffleck had two similar moments in “Batman V Superman: Dawn of Justice.” The most obvious one was the Knightmare sequence in which post-apocalyptic Batman does battle against evil Superman’s forces. Were it not for his other vision in that film, plus one Cyborg had in “Zack Snyder’s Justice League,” I could maybe accept them as just Bruce’s fears.

Batman’s other vision in “Batman V Superman” featured the Flash, who Bruce had not met yet, coming to him from the future to warn him that Lois Lane is “the key” — implying that Lois’s death will trigger Superman’s dark turn. While this one also seemingly took place while Bruce was asleep, this certainly seems more like a thread Snyder was planning to explore later on in his evil Superman story. Especially since we see Flash do a little bit of time traveling in “Zack Snyder’s Justice League.”

It’s also worth pointing out that Flash had the same facial hair in both the “BvS” time travel vision and the Knightmare at the end of the Snyder Cut.

But what tells me these aren’t just Batman being anxious is one bit that Snyder originally shot for “Justice League” back in the day that was restored in the HBO Max cut. When Cyborg is counting down to when the Flash should spark up the Mother Box to bring back Superman, the Kryptonian ship computer keeps trying to warn him that this whole plan is a really, really bad idea.

When Cyborg is finishing his countdown, the ship AI makes one last attempt to get through to him, by showing him a vision of Superman turning bad, taking over the world, and killing Wonder Woman and Aquaman. It’s a clear extension of the Knightmare from “Batman v Superman” — and Snyder continued that thread with this new Joker scene in “Zack Snyder’s Justice League” by having Mera express her rage at Superman for killing Aquaman.

So my guess based on all that is that these visions have always been that Kryptonian computer reaching out to Batman to give him a heads up about this possible future. That’s not to say the ship computer can actually see the future as it’s fated to happen, but rather that it simulated possible outcomes of this story and calculated that things could turn out very bad.

In that context, the inclusion of the Joker in Batman’s little resistance squad is completely inexplicable since Joker isn’t useful in these sorts of situations. He has no powers, and generally gets other people to do his fighting for him.

The only possible explanation is that Batman has some kind of plan to harness Joker’s penchant for chaos in some way. But, again, there is no society here. Joker’s whole deal is about upending normal standards of morality. His feud with Batman is about trying to get him to break his own rules and turn bad. He’s a corrupter.

So while the Joker is certainly a master of trickery, all of his standard operating procedures go out the window in a straight fight against a bad guy who is ready and able to punch everybody in the world to death. Maybe he has some genius strategies for Batman and co. to use, but nothing like that is presented.

And so we end up with this masturbatory scene in which it feels like the Joker is there solely because Snyder wanted Leto in “Zack Snyder’s Justice League,” and not because there was actual any in-universe reason for him to be there.