When tackling “Wolfwalkers,” the last of Cartoon Saloon’s Oscar-nominated triptych about Irish folklore, there was no holding back for director Tomm Moore and art director-turned director Ross Stewart. Cartoon Saloon could be more daring after their success on “The Secret of Kells” and “Song of the Sea,” which turned them into the Irish Studio Ghibli as a result of their experiments with new hand-drawn styles and storytelling techniques.

“One of the things that made ‘Wolfwalkers’ unique for us was that we leaned into more expressive styles,” Stewart said. “We were always inspired by graphic novels and comics, where they could use mark making [applying lines, patterns, and textures to the surface] and different artistic styles to describe the emotions of the characters and the atmosphere of the piece. They weren’t afraid to change styles from one page to the next, so we thought that maybe we could get away with that in animation, too. On our previous films we held back a little bit, but after seeing films like ‘The Tale of Princess Kaguya’ and ‘Into the Spider-Verse,’ we realized that maybe we should be bolder.’”

In particular, they dabbled with expressive line treatments and two distinct clean-up styles to push the environments as much as possible in their mystical adventure about two young girls saving the hunted wolf population of Kilkenny (home of Cartoon Saloon) in the mid-17th century. Robyn, the heroine, who has emigrated from England with her wolf-hunting father, longs to break free from the Puritanical town, and gets her wish when she encounters the free-spirited Mebh and joins her mysterious tribe in the forest that transforms into wolves at night. 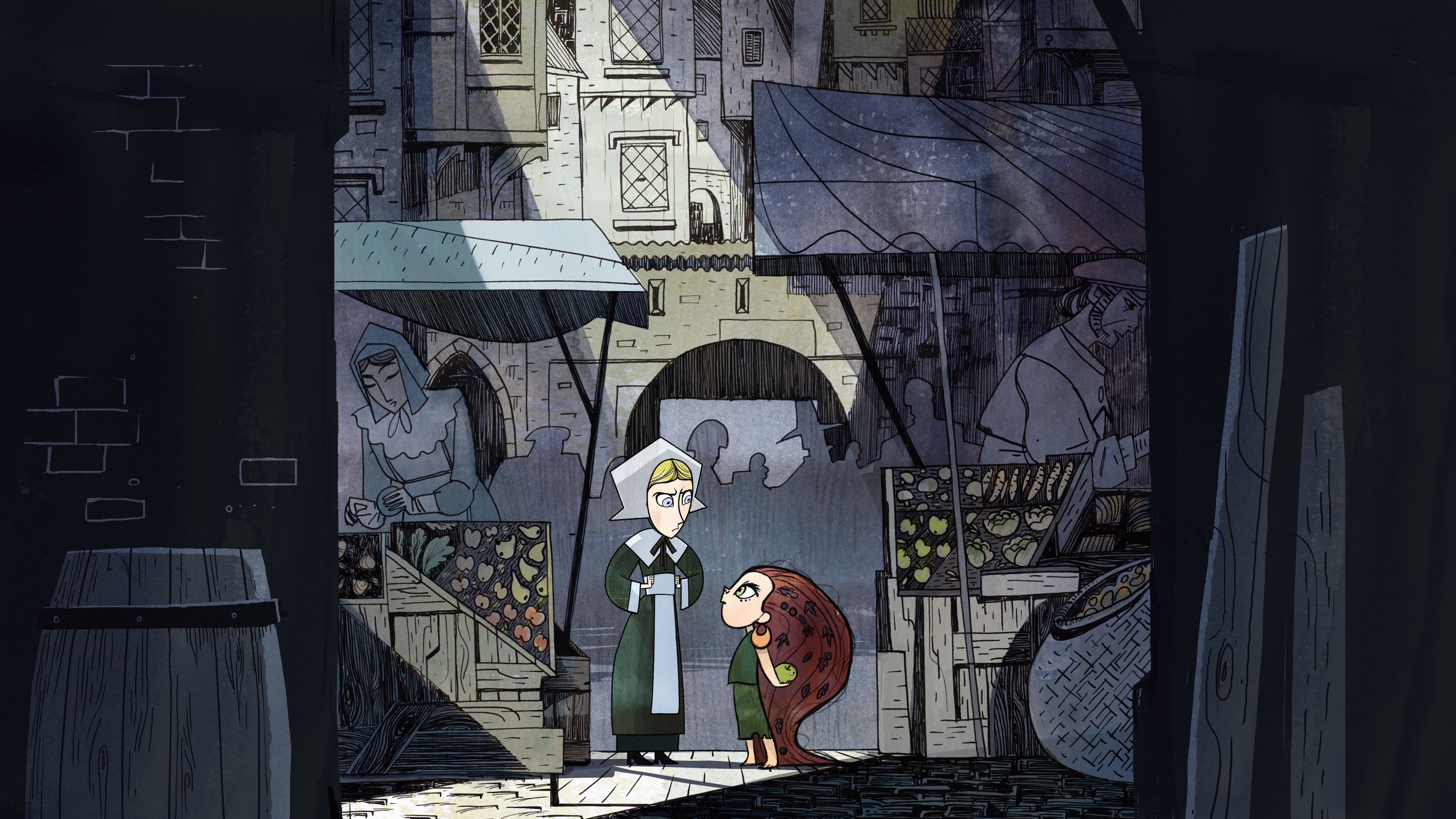 The ambitious conceit was to divide the film into two different worlds and styles: the dark, boxed in Puritan town, and the free and wild forest of the Wolfwalkers. “I remember a couple of people on the production complained early on of too many styles going on and that it was going to look disjointed,” Stewart added. “Tomm and I told them that we could do it, that we’d make sure there was a balance between narrative and art direction.”

There were certainly toolset and pipeline considerations to be addressed at Cartoon Saloon, but, with the added budget along with the ability of the talented scenic illustrators and animators, they fulfilled the vision of this hand-drawn gamechanger. For the town, they devised a woodcut print style indicative of the 17th century, as well as an architectural design that had a distorted sensibility. They stripped most of the color from the town but accentuated blacks and reds. The idea was to entrap Robyn. “We tried to replicate the woodcut print just by making mark making lines, and there was a way that we used inversion where we would draw the white spaces and when inverted we would get these lovely cut strokes,” Stewart said.

The most difficult sequence was Robyn’s escape from the town riding atop Mebh’s mom, Moll, who’s been captured by the Lord Protector (Oliver Cromwell) and breaks free. “It’s a massive action sequence with a lot of background work with quick cuts,” continued Stewart. “This was hard to do in 2D, and normally, we would’ve locked off the camera or not have as much perspective, but we had a larger budget and this was the epic third film of our triptych, so we didn’t scale back. Robyn is on her back and riding down the street and there’s buildings passing by in perspective, a rolling ground, and people jumping out of the way. It was good that we had compositors used to working with three-dimensional planes.” 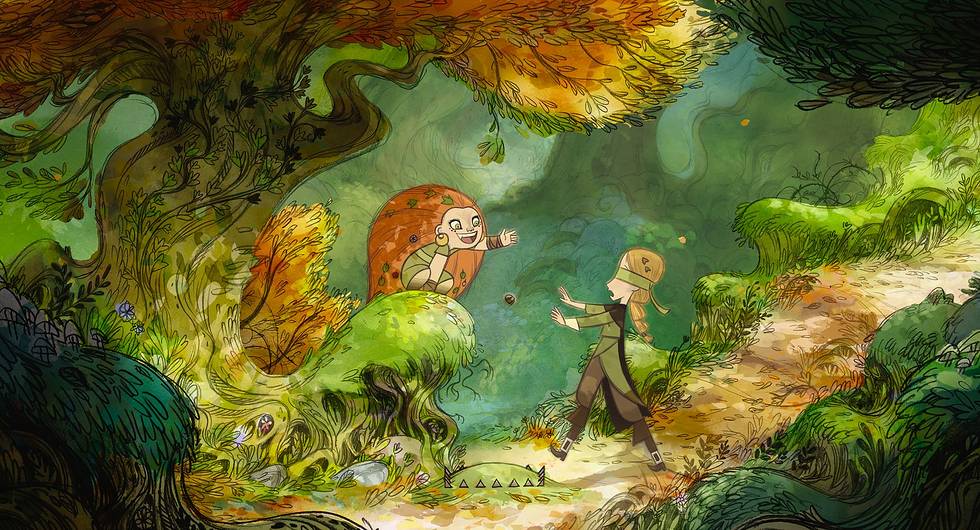 By contrast, the forest had a vivid, colorful look with spiral shapes, autumnal orange oak trees (the color of the Wolfwalkers) and green vegetation behind this damp, Irish landscape. It beautifully captured the freedom of being at one with the wolves and the other animals. For this, they were aided by artist-turned production designer Maria Pareja, who also had a hand in effects and compositing and even designed all of the forest animals.

However, they were crucially inspired by the Disney classic, “One Hundred and One Dalmatians,” which helped pave the way for more expressive line work. “I think we focused more on ‘One Hundred and One Dalmatians’ because it had very clear line work over very expressive color work behind,” Stewart said. “They were very daring and almost willing to go into Pop Art. We loved how the line work, which was Xeroxed, carried over so well into the character animation,” he added. “Some of it was rough because of the degradation and we intentionally wanted that to come through [in ‘Wolfwalkers’] because it has so much energy. We leaned into that rough animation in the construction lines and asked the final line team here to keep it, and if it wasn’t there to draw in a few more.” 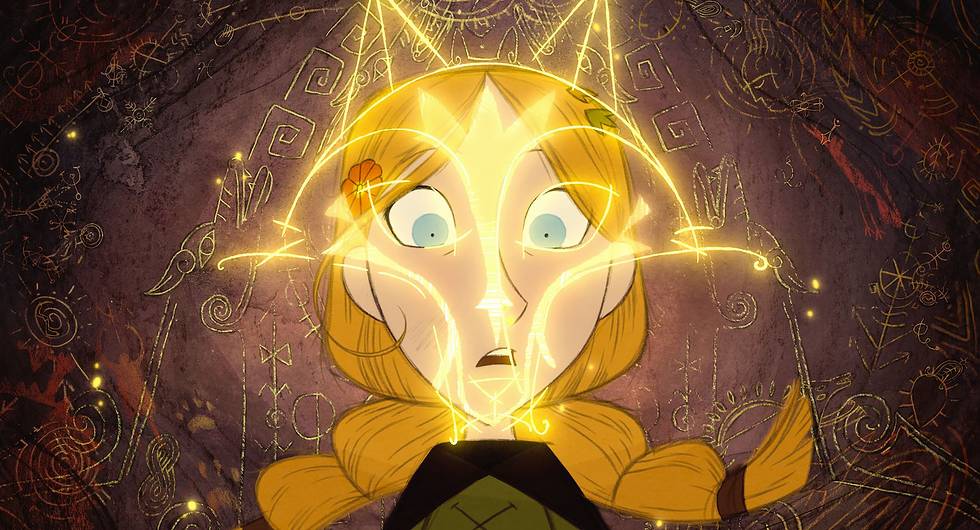 The forest also was influenced by the Disney classic in pushing the color away from the lines. They didn’t color in between the lines; instead, they treated the color work almost like expressive, sketchy, Impressionistic painting behind everything. Typically, fine line animation is often overlooked, but not at Cartoon Saloon. “They imagine their job as being like comic book inkers, who are able to express emotions like sadness or anger,” Stewart said.

It all came together in the climactic running with the wolves sequence, in which Robyn displays her freedom and power as a Wolfwalker. “It has everything we were trying to do,” said Stewart. “It has Wolfvision shots [Robyn’s stylized POV visualizing her heightened sense of smell], and these long, looping pans. The task for the whole background team was to keep the energy going even though the camera was panning past the backgrounds. Maria took ownership of the sequence with her beautiful way of interpreting color with the almost unnatural use of pinks, purples, and lilacs in the night. This amplified Robyn’s journey. It was like a pop-up book effect moving through planes and changing perspective, not in a Disney Princess way but more subtly in places.”