The year 1969 was “pivotal,” says the Rev. Al Sharpton in “Summer of Soul,” a documentary about the Harlem Cultural Festival, a music extravaganza that took place over six weeks at the dawn of the Black Power Movement. “Where the Negro died and Black was born,” he said.

Now in theaters and premiering on Hulu on Friday, “Summer of Soul (…Or, When the Revolution Could Not Be Televised)” is the directorial debut of Ahmir “Questlove” Thompson, the drummer and co-leader of the Roots, a hip-hop group and the in-house band for “The Tonight Show.”

The acclaimed film was compiled from 40 hours of live footage from the festival, as well as news accounts and recent interviews with concertgoers and performers, including Stevie Wonder, Gladys Knight, Mavis Staples and Ray Barretto. They were all deeply impacted by a festival that took place in Mount Morris (now Marcus Garvey) Park from June 29 to Aug. 24, 1969.

Conceived in 1967 by the promoter Tony Lawrence as a series of Sunday-afternoon concerts, the festival in total drew more than 300,000 people. It attracted the support of John V. Lindsay, New York’s Republican mayor (whose guest appearance onstage makes it into the film), as well as many of the famous Black performers and activists of the era, such as Mahalia Jackson, Nina Simone, the Rev. Jesse Jackson, and Sly and the Family Stone.

Even though most of the festival was captured on film, only parts of it were aired on local television, and these concerts were soon upstaged by another festival that summer, two hours north of Harlem in Bethel, N.Y. — a festival best known as Woodstock.

Yet footage from the Harlem festival sat unprocessed in the basement of the concert producer and videographer Hal Tulchin, who tried to garner network interest in an event that he colloquially called “Black Woodstock.” Before Tulchin died in 2017, the producer Robert Fyvolent reached out to him, and they began reviving interest in a documentary to be released on the festival’s 50th anniversary in 2019. 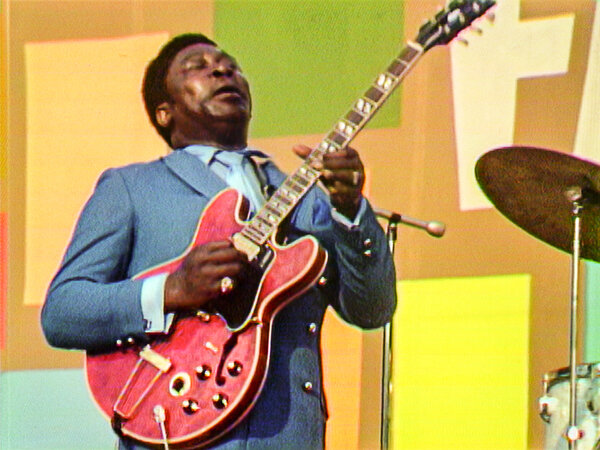 When Fyvolent and his fellow producer David Dinerstein approached Thompson to direct it, he responded with skepticism. How, he thought, could such a momentous event be lost to history?

By the time he saw the limited footage that Tulchin had digitized over the years, his incredulity turned into grief — realizing the cultural void that it could have filled if he and other members of the hip-hop generation knew it existed.

Thompson overcame his inexperience with the medium, and simply approached it as a storyteller, a formidable skill of his that comes as no surprise to fans of the Roots as well as to readers of his five books, including his 2013 memoir, “Mo’ Meta Blues.” (By then, Joseph Patel had signed on as a producer as well.)

In January, the film won the Grand Jury and Audience prizes in the nonfiction category at Sundance. But even more important, “Summer of Soul” feels right on time. Not only does the film remind us of the diverse cultures and people that thrive in Harlem, but it also humanizes Black people’s mourning in the face of violence and death. (Martin Luther King Jr. was assassinated a year before the festival.)

And rather than present a myth of unrealized interracial harmony, the movie celebrates differences, be it in musical genres (the festival featured Latin jazz, gospel, psychedelic rock and more) or among the generations in the crowd.

From his messy “Tonight Show” dressing room (he playfully called it “the ‘Sanford and Son’ junkyard”), Thompson spoke by video about how he immersed himself in the footage and how he hopes these performances will inspire Black artists today to be more radical and responsive to our times. These are edited excerpts from the conversation.

When did you first learn about the Harlem Cultural Festival?

This is a two-parter. Part one is that I unknowingly, back in 1997, saw maybe two or three minutes of a Sly and the Family Stone performance from the festival. It was not a bird’s eye-view camera, and I couldn’t see the makeup of the audience. I saw the big giant word “Festival” behind them, and I was under the impression that this was from the ’60s and thought, “Maybe they’re in Switzerland or somewhere in Europe.” I thought that they were showing me something vintage because that was the theme of the restaurant I was at — the Little Soul Cafe in Tokyo.

Twenty years later, I received a note asking me to meet with my two future producers, Robert Fyvolent and David Dinerstein, about a Harlem cultural festival that was like a “Black Woodstock.” Instantly, the music snob in me said, “I’ve never heard of that.” So I looked it up online. It’s not on the internet, so I was highly skeptical. But, when they finally showed me the footage, I instantly recognized the backdrop for Sly and thought, “Oh God, this really did happen.” For nearly 50 years, this just sat in a basement and no one cared. My stomach dropped.

How did you approach turning six weeks of concert footage into a two-hour documentary?

I transferred 40 hours of footage on my hard drive, and I kept it on a 24-hour loop in my house. I have a device so I could watch it any time, in my living room, in my bedroom, in my bathroom. I also put it on my phone when I traveled. For five months, that’s all I watched and just kept notes on anything that caught my eye. I was looking for, “What’s my first 10 minutes, what’s my last 10 minutes?” Once I saw Stevie Wonder do that drum solo, I knew that was my first 10 minutes. That’s a gobsmacker. Even though I know he played drums, that’s something you don’t see all the time.

Why was it so important to include the experiences of people who actually attended?

This wasn’t as easy as people think. The festival was 50-plus years ago, you’re really looking for people who are now in their late-50s all the way through their early-70s, and Harlem is a different kind of place. You have to hit the pavement because so much of the social fabric of the neighborhood is community-oriented. One of our producers, Ashley Bembry-Kaintuck, even went to a swing dancing class to meet one person [the former Black Panther Cyril “Bullwhip” Innis Jr.] we identified.

Musa Jackson winds up being our anchor. He was one of the first people to respond, but he disclosed to us that he was just 5 years old when he went to the festival. He told us, “Look, this is my first memory in life. So I’m just going to tell you everything I remember.”

Given that the festival mostly predated Woodstock, why do you think it was so easily forgotten?

History saw it fit that every last person that was on that stage now winds up defining a generation. Why isn’t this held in the same light? Why was it that easy to dispose of us? Instead, the cultural zeitgeist that actually ended up being our guide as Black people was “Soul Train.” And so, I’m always going to wonder, “How could this and ‘Soul Train’ have pushed potential creatives further?”

Also lost was the context that made this festival possible in the first place. How did you go about reconstructing that?

At the end of the day, the sole purpose of this festival was to protect property. There was a riot in ’68 in Harlem when King died. And there was fear in the city that it would happen again in 1969, so there was a sense that the festival would keep Black people calm all summer. And once it served its purpose, that was it.

But your film doesn’t present it that way. For Black artists, this looks like it was the music event of the year.

Context is everything. There’s a lot of people that think that Harlem is just the Apollo Theater, Sylvia’s and the occasional incense and oil guy, but it’s so much more than that. This event was really a labor of love for [promoter] Tony Lawrence. There just weren’t festivals that catered to Black people.

We also found out that Jimi Hendrix tried to get on the Harlem Cultural Festival, but was a little too radical for them. So he shadowed the festival. For its first three weeks, he did blues performances with [guitarist] Albert King in the after-shows at night.

You conclude with Nina Simone’s performance. Why end with her?

“Mississippi Goddam” might be in the lineup, “Four Women” of course. But she’s not doing [her early pop hits like] “My Baby Just Cares for Me.” I dub Nina’s performance as some Michael Jordan Game 6-type thing. She had the most potent message, the most potent presence. I’m not saying that we all have to do message songs, but I’m actually begging for Black artists to balance the output that we have now.

How did making this film change you? Do you want to direct again?

More than anything, it helped me really come to grips with what my role and my purpose in life is, as an educator. And it really helped me in the confidence department. Now I’m ready to take on the world.