The parody musician makes a joke of his own life, with the help of Daniel Radcliffe, in this uproarious sham biopic. 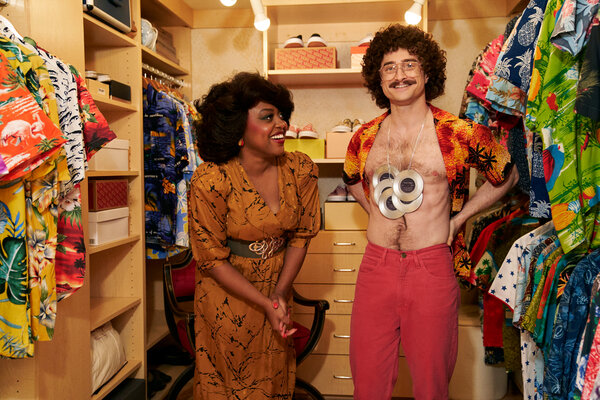 Weird Al Yankovic is the most improbable MTV star in modern history: an abstemious accordion player whose family-friendly song parodies have cracked the Top 40 for four straight decades, crowning him the Methuselah of novelty acts. (Compared to Yankovic, the Monkees are a flash in the pan.) “Weird: The Al Yankovic Story,” an uproarious sham biopic starring Daniel Radcliffe, and co-written by Yankovic and the film’s director, Eric Appel, is merely the most recent time the artist has made a joke of his own life from sheltered child to odd teen to rock god.

Earlier gibes at Yankovic’s own implausibility include nearly every interview he’s ever given, as well as a 1985 mockumentary (“The Compleat Al”) produced during the heady days of his “Eat It” single success, and a 2010 glossy drama mock trailer, also directed by Appel, that has now been willed into feature-length existence and padded with more lies.

Like Yankovic’s music, “Weird” is a note-for-note parody of a genre. Here, the target is the prestige biography and its rote rise-and-fall trajectory that’s become so creaky, it could play backup on his album “Polka Party!” The fibs — er, “facts” — are squeezed to fit the formula. When young Al’s mother (Julianne Nicholson) discovers a Hawaiian shirt in his bed, the score swells portentously as though we’re watching Jackie Robinson clench his first baseball bat. If a scene needs Al’s accordion to be slandered as a vomit-inducing devil’s squeezebox, so be it; minutes later, his music might bring a biker to tears, or Madonna (Evan Rachel Wood) to ecstasy, or incite the cops, during the Jim Morrison phase of Yankovic’s career, to arrest him for lewd behavior.

The script deflates any pretensions that Yankovic is a lyrical genius. Teasingly, Appel drags out a sequence where Al, assembling a sandwich, struggles to brainstorm his take on “My Sharona” until the audience is hissing “Bologna!” through its teeth. Later, his mother tries, and fails, to force-feed her oblivious son the libretto for “Fat.” Still, Radcliffe is winningly guileless in his performance, twitching his costume-y eyebrows and mustache like gentle bunny ears even as he lip-syncs “Another One Rides the Bus” with such commitment that his neck veins nearly pop. (The cinematographer Ross Riege is not above backlighting Radcliffe’s wig to resemble a halo.)

It’s a testament to Yankovic’s status in pop culture that the film is crowded with so many celebrity cameos that it could have been titled “It’s a Weird, Weird, Weird, Weird World.” (Yankovic himself appears as the record label executive Tony Scotti, who released Yankovic’s debut album.) Only Weird Al scholars will note the pointed irony in a scene where the musician rejects casting offers to play James Bond and Indiana Jones, franchises that would later dominate the July 1989 box office over his comedy flop, “UHF,” chucking him into a creative tailspin. Those expert level Al-thorities may also be the only ones to realize how much of “Weird” is actually true. Yes, Yankovic did acquire his first accordion from a traveling salesman. Yes, he did record his first hit in a public bathroom. And yes, he did achieve almost instantaneous success. Telling it straight turns out to be Yankovic’s greatest prank.