The Bachelor star Victoria Fuller is making some big moves in her life.

It’s no secret now that she was in quarantine with Chris Soules on his farm in Iowa, where the two began a relationship.

However, she recently confirmed she’s single again as she didn’t see herself settling down in Iowa as a farmer’s wife — at least not yet.

While fans may have thought she was going back to Virginia Beach to settle down, Victoria’s hinting she’s ready to hit the reset button.

Victoria Fuller appears to be moving to Montana

This week, Victoria published a post on Instagram, where she revealed this year had been a crazy one for her. And that’s where she wrote that she was headed to Montana — on a one-way ticket.

“Today I’m 27. Kinda feels like 97, but here we are. I’m so overwhelmed (in the best way). This year has been the most monumental year of my life — nothing short of amazing/terrible/scary/exciting/awful ..BUT wow have I grown. I am so blessed that it brings me to tears. I have the best family & friends I could ever ask for and an experience that I am so grateful for,” Victoria wrote on Instagram.

“I remember last year; this time, we were filming in Costa Rica with some of my best friends I would have never known I needed. But 27 is a new chapter & I’m starting it with a one way ticket to MONTANA with the people who have kept me grounded since day 1. I feel like my life is just starting and I can’t wait to see what’s next. I’m so lucky! 27 what u got??” 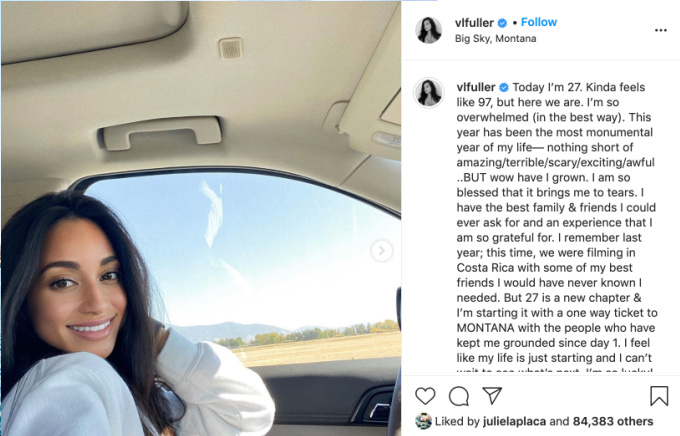 In the post, she also wrote that she felt her life was just starting and she was ready for a new year as she turned 27.

She mentioned nothing about Chris and the recent split. Because of his farm in Iowa, he cannot relocate to Montana, where she wants to stay.

He went on The Bachelor in hopes of finding someone who wants to live the farm life, but so far, he has been unsuccessful.

Fans were surprised when it was leaked that Victoria was in Iowa with Chris. They had no Bachelor connection, but it was later revealed that Kelsey, from Peter Weber’s season, hooked up Victoria and Chris.

She lives in Des Moines, so she knew Chris. Chris and Victoria never posted anything together, keeping their romance private.

On September 9, we reported that Victoria and Chris had split up. She confirmed this on Nick Viall’s podcast, revealing she wasn’t ready to settle down on a farm yet.

She isn’t closing the door on this romance.

A few weeks prior, she mocked a follower who claimed to know they had broken up. She wasn’t ready to admit to the split, since she had kept everything else private.

The Bachelorette premieres Tuesday, October 13, at 8/7c on ABC.