If you’re following the buzz out of Tribeca this year, you probably know that the 20th edition of the festival will open with “In the Heights,” screening in all five boroughs. You might know that the closing night entry, an untitled concert film featuring Dave Chappelle, will take place at Radio City Music Hall with full capacity. For 12 days, from June 9 to 20, 66 feature films will screen all over the city at outdoor venues, marking one of the first big media events since New York began to reopen. But even that sizable lineup doesn’t fully encapsulate the curation on display.

For years, one of Tribeca’s strongest suits has been its immersive programming, which includes VR, AR, and interactive experiences. As new media creators continue to create more groundbreaking work that takes advantage of cutting-edge technology, Tribeca’s programming has been at the forefront of showcasing many of the strongest examples. And as the future of traditional cinema continues to be an open question, immersive program provides a compelling look at a whole new field of storytelling and digital art just getting started.

This year, some of the most exciting aspects of that selection is available for free, both around New York City and online. There are also ticketed opportunities to a handful of immersive work in person this year, and additional programming available to diehard new media consumers who have high-end VR headsets and want to browse the full scope of immersive programming available. Here’s a quick breakdown of some highlights. Note that this preview does not include the Tribeca Games programming, a separate section that we’ll explore later this week.

The most accessible aspect of the Tribeca Immersive programming — and the festival as a whole — comes from this section, where the bulk of the program can be accessed at this link, or at specific sites around the city. The section showcases the way interactive media can provide deeper engagement with some of the most pressing issues of the moment. Among the highlights: Documentarian Brett Gaylor’s “Discriminator,” an augmented reality work (following his delightful AR piece “Fortune” that premiered at Sundance’s New Frontiers in January) about the dangers of facial recognition software. Over a decade ago, Gaylor was invested in the utopian possibilities of the open internet, even making an open-sourced documentary (“Rip! A Remix Manifesto”) about the musician Girl Talk. Now, like much of the world, he’s a bit more skeptical about the future. “Discriminator” is accessible from your computer and (with your permission) accesses your web camera to create a deep fake of your face. That’s right: The camera puts the viewer at the center of the story to make its chilling point.

Over the course of three remarkable chapters, Gaylor tracks the history of photo-sharing sites like Flickr, and how corporations ultimately exploited Creative Commons licenses to access personal data and put millions of people’s lives online without their permission. If you haven’t heard of MegaFace, the publicly available facial recognition platform, Gaylor will make sure it haunts your nightmares. In the process, he’ll also deliver a searing breakdown of modern technology’s most perilous extremes, and what it takes to protect your privacy in the digital age.

Gaylor’s work is just one of several compelling AR works throughout the section that demonstrate the young medium’s potential to clarify these confusing times. “Kinfolk” is an app designed to highlight Black and Brown people throughout history by positioning monuments of them on top of real maps throughout the city. It’s a remarkable means of showing the invisible nature of history in a modern-day context that turns a seemingly practical geo-mapping tool into a form of advocacy for new ways of literally “seeing” the past around us. 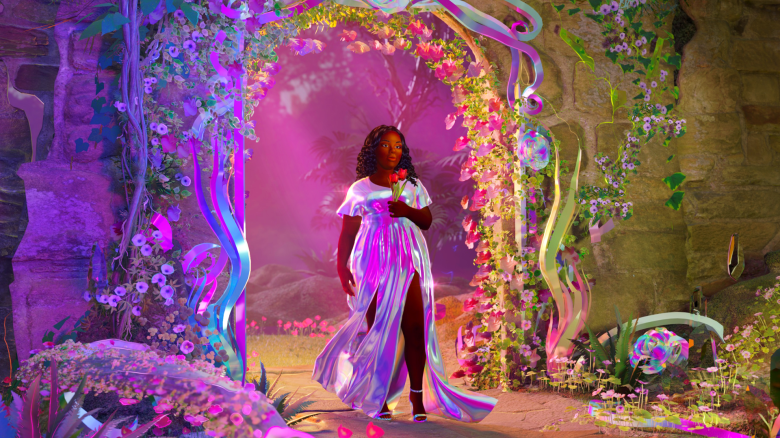 Another meaningful AR selection is “Breonna’s Garden,” a meditation on the life of the late Breonna Taylor narrated by her younger sister; hitting on similar themes, “Un(re)solved” uses site-specific AR to explore the history of Civil Rights Movement-era racially-motivated murders, and takes place at The Netherlands Monument in Battery Park (there is also a webXR version available on Tribeca’s site). Executive produced by veteran documentarian Dawn Porter (“John Lewis: Good Trouble”) and created by Tamara Shogalou, it touches on over 150 murders and explores how their cases were reopened as a result of the Emmett Til Unsolved Civil Rights Crime Act.

On the lighter side, Tribeca’s immersive programming includes two interactive musical experiences. In “Current,” visitors follow a guided walking tour on their mobile phones and headphones as they’re guided across Lower Manhattan to explore real and imagined stories of the surrounding areas. Those looking for more of a party vibe might want to check out WarpSound Music Experience, an interactive live music experience that implements audiences’ smart phones and involves “a half-iguana DJ.”

While most of the VR experiences at the festival are in a separate section, anyone with an Oculus Quest or similar gear can chase down a free ticket to “The Severance Theory: Welcome to Respite,” the first chapter of a new VR adaptation of the Los Angeles interactive theater work. After signing up for the show, participants are invited to a bespoke space in VRchat where they’re asked to perform in the role of an 11-year-old child who suffers from dissociative identity disorder. Two actors play your parents and walk you through a scenario that’s alternately charming, mysterious, and deeply unsettling as it delves into the nature of a confused young psyche, providing another compelling (if brief) example of VR’s ability to generate empathy from the inside out.

In the early days of the pandemic, anyone keen on experiencing new VR work had to own a headset (or borrow one). While that’s still the ideal investment for digging into this ever-fascinating new storytelling device, the return of Tribeca’s Spring Studios is a welcome opportunity for ample VR work to reach more audiences. One $50 ticket gets you access to all five VR programs in this competition-based selection, each of which has been designed for up to four users at a time (so there are never more than 20 people in attendance at once, allowing for social distancing).  The program is also expected to be available as a bundle on the Oculus store for headset users in the near future.

As usual, the program continues to show the strength of non-fiction storytelling in VR. Documentary offerings include “Lovebirds of the Twin Towers,” the story of two elevator operators at the World Trade Center who fell in love at work and survived 9/11 to share their story. The five-minute piece is one of the shorter works in the section, but shows how two decades after that tragic New York event, there are still many stories left to tell.

Non-fiction work largely remains within the realm of 360 videos; more advanced interaction comes from animated work (otherwise known as “six-dof,” for six degrees of freedom). Among the more ambitious offerings in the section, “We Are at Home” is a 45-minute animated adaptation of the 1920 Carl Sandburg poem “The Hangman at Home.” There’s also “Inside Goliath,” which — like “The Severance Theory” — explores mental illness; in this case, creators Barry Gene Murphy and May Abdalla use interactive animation to explain the experience of schizophrenia. (In concept, the project bears some similarity to the breakthrough VR work “Notes on Blindness,” which allowed participants to experience what it’s like to lose your sight.)

There’s also “Critical Distance,” the latest nature-themed VR work to explore an endangered species. Focused on the experiences of Southern Resident orcas, “Critical Distance” is designed to show the complex nature of the whales’ existence as well as the fragile ecosystem surrounding it. And Felix Gaedtke and Gayatri Parameswaran’s “Kusunda” explores the gradual extinction of an indigenous language and the efforts of a young woman to keep it alive.

Collectively, these works point to VR’s ability to capture distinctive stories as subjective experiences. Anyone keen on sampling the creative potential of the technology would be well-advised to start here.

Then again, if you have a VR headset, a whole new world awaits you. Once again, Tribeca has partnered with the indie VR platform Museum of Other Realities to create an online showcase for additional VR works and a social environment to network with other participants. For $15, attendees can check out major new VR achievements like Sundance breakout “The Changing Same,” a surreal descent into the history of racial injustice in America, and “Paper Birds,” an interactive animated Argentine story of a child with impaired vision who uses music to recover his lost sister from a shadowy realm.

The bulk of these works require high-end headsets that can tether to a PC (like the Oculus Rift or HTC Vive). If that’s you, embrace the opportunity to dig into a strong international VR showcase and roam a virtual world to meet likeminded people in the VR community. And if not, try some of the more accessible options above. If they leave you impressed, then consider investing in the hardware. There will be more opportunities to dig deep on VR programming in the year ahead.