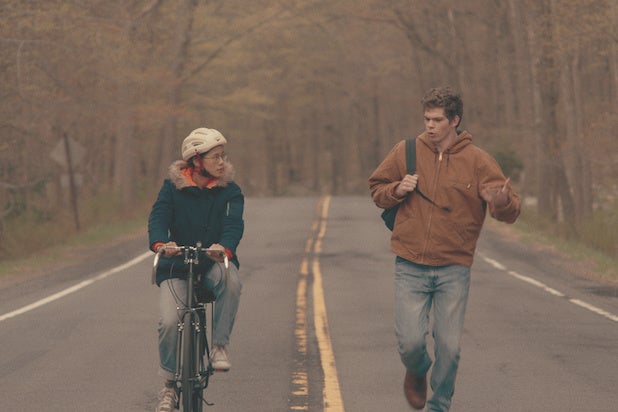 The Tribeca Film Festival unveiled its awards in the jury competition for the movies that were to show at the canceled festival, recognizing Alice Wu’s “The Half of It” with the top prize in the narrative competition and Steve Zahn with the Best Actor prize for his work in “Cowboys.”

The New York festival was meant to take place April 15-26 for its 19th edition, so a group of juries selected the top prizes among all the accepted films.

Shorts awards went to “No More Wings” for Best Narrative Short, “My Father The Mover” for Best Documentary Short, “Friends” for Best Animated Short and “Cru-Raw” for the Student Visionary Award. The Nora Ephron Award went to director Ruthy Pribar for her feature “Asia.”

“We are fortunate that technology allowed for our jury to come together this year to honor our filmmakers,” Tribeca Film Festival co-founder and CEO Jane Rosenthal said in a statement. “Despite not being able to be together physically, we were still able to support our artists, which has always been at the heart of the Festival.”

“While we are not yet able to celebrate these incredible films at their premieres, we are so proud to celebrate them in partnership with our generous jurors through our 2020 Tribeca awards,” festival director Cara Cusumano said in a statement. “The jury chose to recognize a daring, innovative, entertaining, diverse group of films and filmmakers, and the Festival is pleased to honor all of them with our first ever virtual awards ceremony.”

The full list of winners for the juried awards, presented by AT&T, the Art Awards in partnership with CHANEL, Tribeca X, sponsored by PwC, and the jury participants, are listed in full below:

Founders Award for Best Narrative Feature – “The Half of It,” directed by Alice Wu.
Jury Comment: “The film is so charming, it’s so energetic, it’s so fun, it’s so well-paced, it’s directed with such a sure hand, it’s a really confident film and the characters are really well drawn and the actors were fantastic.”
Art Award: Julian Schnabel’s Le Scaphandre et le Papillon, 2007. Oil on map.

Best Actress in a U.S. Narrative Feature Film – Assol Abdullina, “Materna.”
Jury Comment: “Assol just has so much compelling energy; her emotions ran so deep…we cared about her dilemma.”

Best Cinematography in a U.S. Narrative Feature Film – “Materna,” Greta Zozula, Chananun Chotrungroj, Kelly Jeffrey, Cinematographers.
Jury Comment: “The visuals were striking and played with color, light and dark, in a very interesting way.”
Special Jury Mention for Cinematography: My Heart Can’t Beat Unless You Tell It To.

Best International Narrative Feature – “The Hater” (Poland), directed by Jan Komasa.
Jury Comment: “Incredibly relevant for today; we were really impressed by the way it portrayed a character that is not immediately empathetic but really got us into the journey and the story.”
Art Award: Helen Marden’s January Golden Rock, 2020. Watercolor on paper.
Special Jury Mention: Ainu Mosir

Best Actor in an International Narrative Feature Film – Noe Hernandez, “Kokoloko” (Mexico).
Jury Comment: “For his raw and brave performance, taking a giant leap of faith, hand-to-hand with his director.”

Best Actress in an International Narrative Feature Film – Shira Haas, “Asia” (Israel).
Jury Comment: “Her face is a never-ending landscape in which even the tiniest expression is heartbreaking; she’s an incredibly honest and present actress who brings depth to everything she does.”

Best Cinematography in an International Narrative Feature Film – “Asia” (Israel), Daniella Nowitz, Cinematographer.
Jury Comments: “We were impressed with how the cinematography was supporting the emotionality of the story and was allowing us to really deeply feel with the characters.”
“Very simply and beautifully done.”
Best Screenplay in an International Narrative Feature Film – “Tryst With Destiny” (India, France), Prashant Nair, Screenwriter.
Jury Comments: “How cleverly conceived and executed this script was!” “Beautifully made film.”

Best Cinematography in a Documentary Film – “499,” Alejandro Mejia, Cinematographer.
Jury Comment: “The filmmakers did an incredible job of weaving this fictional story into what’s happening today with the disappeared and to marry such grand visions that cinema can only do.”

Best Editing in a Documentary Film – “Father Soldier Son,” Amy Foote, Editor.
Jury Comment: “Such a well-crafted film from start to finish; a story that stays with you.”

BEST NEW NARRATIVE DIRECTOR COMPETITION:
The jury comprised of Lukas Haas, Juno Temple, Nat Wolff, Grace Van Patten, and James Ponsoldt awarded the following:
Best New Narrative Director – “Nobody Knows I’m Here,” Gaspar Antillo, Director.
Jury Comment: “A film that felt vital and alive, and every time we thought we knew who the protagonist was or what the world was it evolved and revealed more of itself to us.”
Art Award: Rita Ackermann’s The Working Woman 3, 2018. Oil, crayon and graphite on paper.

The jury comprised of Asia Kate Dillon, Marti Noxon and Sheila Nevins awarded the following for the 2020 Short Documentary and Student Visionary Competitions:
Best Documentary Short – “My Father The Mover,” Julia Jansch, Director.
Jury Comment: “A “movement” film which frees people from the pain had the biggest impression on us and lasted through the tragedies we’re going through now.”
Art Award: Francesco Clemente’s Flag US, 2018. Watercolor and miniature on paper.
Special Jury Mention: Welcome To A Bright White Limbo

TRIBECA X AWARDS:
The finalists for the 2020 Tribeca X Awards, sponsored by PwC, are available for public viewing on Tribecafilm.com. Tribeca X recognizes excellence in branded storytelling at the intersection of advertising and entertainment.

Best Feature – “U Shoot Videos?” Director, Morgan Cooper
Brand: Adorama
Jury Comments: “You had us at the shocking ending – while we all loved the storytelling and performances up to that point, how the feature built up to that climax was very impactful.”