“The Bachelor” is an incredible franchise that has spanned 25 seasons so far and spawned numerous spin-offs, like “The Bachelorette,” the summer hit “Bachelor in Paradise,” and the brand-new spin-off, “The Bachelor Presents: Listen To Your Heart,” which aired for the first time in 2020, per Deadline. And, while each of these spin-offs has their own unique way of doing things, there are a few traits that seem to transcend Bachelor Nation, including an intense set of rules that all contestants have to follow.

Fortunately, for fans of Bachelor Nation, the franchise has been going strong since 2002, meaning there are plenty of people out there who have spent time on one version — or more! — of the show. With so many contestants throughout the franchise’s nearly 20 years on television, it was inevitable that behind-the-scenes information would come out about the shows, revealing just what goes on when the cameras stop rolling. Some former Bachelor Nation contestants have taken to writing books about the whole experience — like Sean Lowe — while others have spoken on podcasts or written blogs detailing their time on the show, like Ali Fedotowsky . And, while some of the rules make sense, like no sex before the Fantasy Suite date and contestants aren’t allowed to have their cellphones, others can be a bit of a head scratcher, like banning a word. Keep scrolling to find out which word Bachelor Nation isn’t allowed to use.

Contestants on 'The Bachelor' can't use the word 'process' 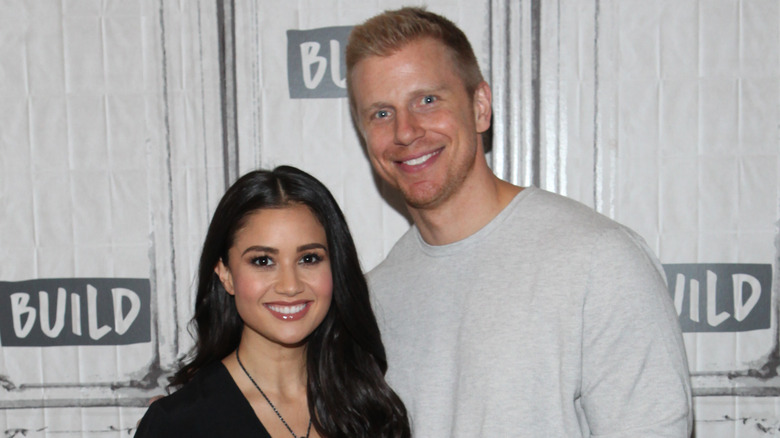 One of the biggest behind-the-scenes looks at Bachelor Nation came courtesy of Sean Lowe, a contestant from Emily Maynard’s season of “The Bachelorette” who became the lead for Season 17 of “The Bachelor.” He has been one of the show’s few success stories, marrying Catherine Giudici, whom he met on the show, per Glamour. Following their gorgeous wedding in 2014, Lowe seemingly decided to document his experience on the show in his book, “For the Right Reasons: America’s Favorite Bachelor on Faith, Love, Marriage, and Why Nice Guys Finish First.”

According to its official website, Lowe’s book is a “gripping tell-all” that “uncovers the backstage drama that fuels The Bachelor and The Bachelorette,” as well as some of his “personal struggles” to find “true love.”

Some of the drama detailed includes just how long the rose ceremonies take (forever!) and that the contestants can’t eat the food during the one-on-one dates. But one of the biggest revelations is centered around the word that they can’t say: process. In fact, according to Lowe, if a contestant accidentally says “process,” the producers will stop filming and require the interaction or interview to be filmed again, per Glamour. So, if they can’t say “process,” what are contestants supposed to call the show? Lowe detailed in his book that they can refer to their time on the show as a “journey.” At least Lowe’s specific journey was a successful one.