THE Masked Singer revealed Rob “Gronk” Gronkowski to be The White Tiger as fans rejoice over the NFL star’s elimination after his “terrible” singing performances. 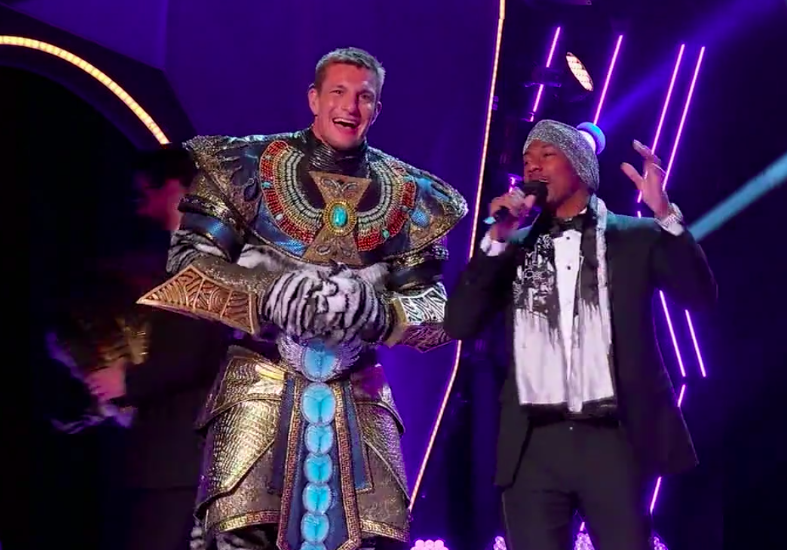 Most fans online have predicted the NFL star was under the ferocious feline costume all season and judges Robin Thicke, 43, and Jenny McCarthy, 47, agreed with their guesses.

The Blurred Lines singer praised the Pats player – who he says is "one of the best" football tight ends in history.

Rob put on a show-stopper to Right Said Fred’s iconic tune I'm Too Sexy and even danced on a stripper pole along with a costumed lion.

The outgoing athlete thrusted his hips and showed off a variety of dance moves throughout each performance this season.

When asked by host Nick Cannon, 39, why he decided to go on the show, the retired football player confessed:

“I’ve always liked performing and wanted to come out here and give it my all and learn to dance to entertain the crowd.

“I enjoyed every performance for you guys and I’ve had the best time on this show.”

Gronk – who is known for his moves on the field after scoring a touchdown – was recognized previously by many fans online but many were thrilled he was voted off.

"I knew it was Gronk from day one and he should have been out after day one. Glad he's gone. Much better singers," one viewer tweeted.

Another shaded his voice: "Gronk said he went on #TheMaskedSinger because he wanted to learn how to sing and dance. Well… you did one of those things, sweetie."

A disapproving fan ended on an optimistic note: "The vocally weakest performer was eliminated in this weeks #TheMaskedSinger, that's for sure.

"But I have to say that I very much appreciated that first time since his 1st song he really SANG on stage next to dancing. Thank you for that, mr R.G!"