Orla Carroll shares the secrets to achieving that perfect 45 ‘do

American presidents have been seen on TV almost as long as television has existed (FDR managed to do so as far back as 1939), but Showtime’s “The Comey Rule” — which chronicles the rocky relationship between Donald Trump and his administration’s inherited FBI staff, led by director James Comey (Jeff Daniels) — presented a truly unique challenge: casting an actor to play the most historically controversial leader of the free world while he was still very much in power and mounting a tense second-term campaign, surrounded by an endless news cycle that always threatened to permanently change the ongoing national narrative.

For hairstylist Orla Carroll, “Comey” handed her a distinct challenge, which was to follically transform the physically imposing, chameleonic Irish actor Brendan Gleeson into the nation’s 45th President Donald Trump, whose hair is almost as synonymous as his visage. “The most important thing for me and for Brendan, especially since he had so many speeches to perform, was to make sure that it was it wasn’t too vague or a caricature”, said Carroll, who has been Gleeson’s personal hairstylist for over two decades, going all the way back to his starring role in John Boorman’s 1998 film “The General,” in which he memorably played Dublin crime boss Martin Cahill, which proved the actor was obviously well-versed in playing charismatic charlatans. 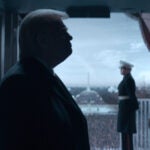 “Brendan always likes to find the human center in people, whether you like them or hate them. If you play somebody as just one element, there’s no depth to that. Let’s face it, we all have a bit of both in us, you know. We’re all forever victims of our circumstances,” said Carroll. And while Gleeson is one of many real-life people being portrayed in the event series, he is probably the most altered via makeup and especially hair.

“First we played with Brendan’s own hair, and after about six hours we caught a glimpse of a kind of M-shape,” offered Carroll. “But Trump’s face is more rectangular than Brendan’s, so we had to build up the kind of top side corners of Brendan’s hair to make it work. The hair could not be bigger than him.” 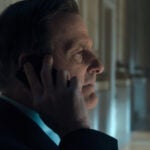 This involved some trial and error in the preparation as machinations of the Trump coiffure is still a matter of debate by even the most experienced of stylists. “I asked a makeup artist friend of mine to design an eggshell piece that would act like a ball cap underneath because you never actually see [Trump’s] scalp that much, so I wanted a piece that I could kind of put inside his wig,” said Carroll, who was aided by various wigs and pieces direct from Italy. “Once we kind of nailed the look, it was more refining and keeping it light on top and making sure Brendan’s own hair was blended into it so I could blow dry the piece every day to make sure it became him.”

So, did Carroll and Co. ever hear from the famous-for-bluster former president about his likeness in the Showtime miniseries? “No, never!”, said the veteran of such varied projects as “Apocalypto” and “Downhill” and counts actress Eva Green (“Penny Dreadful”) as an ongoing client in addition to Gleeson. “I think if Brendan played it one-dimensionally, maybe that would have turned out differently. His approach is always: you do your homework, do your research, and you come up with the goods.”

“The Comey Rule” is available to stream on Showtime On Demand