Binder, whose bonafides include writing and directing “The Upside of Anger” and “Reign Over Me,” got his start at The Comedy Store during its heyday in the 1970s, where he became part of owner Mitzi Shore’s inaugural crop of regulars alongside giants of stand-up Robin Williams, Jay Leno, Richard Lewis, and David Letterman, as well as those who used the Los Angeles comedy hotspot as a springboard to other endeavors (including Jim Carrey, Howie Mandel, Michael Keaton, and Jimmie Walker). Binder obviously has a tremendous affinity for the comedy Mecca that served as his gateway to the entertainment industry, but it may be this same affection that makes him the ever-present Achilles’ heel of “The Comedy Store.”

The five-episode docuseries’ impetus is Binder’s return to the famed comedy venue, after several decades away. Coaxed back by Bill Burr, whose stand-up special “Paper Tiger” Binder directed in 2019, his reverence for this comedic clubhouse of yore seems to have only ballooned in his absence. There are shots of him wandering backstage or skulking in the back of the audience, as if shyly meeting eyes with the first love of one’s life, which “The Store,” in the parlance of Binder and so many others, likely was. It was that first wave of comedians’ proving ground for a coveted spot on “The Tonight Show Starring Johnny Carson.” As Letterman says in one of the early interviews, “The Store was like the Triple-A baseball of comedy,” with a shot on Carson ostensibly serving as the big leagues.

Let’s talk about these interviews. Binder and his producers assembled a veritable Murderers’ Row of comedic talent, besides the names mentioned above, he also sat down with Nikki Glaser, Whoopi Goldberg, Sebastian Maniscalco, Marc Maron, Chris Rock, and Iliza Shlesinger, just to name a few. It truly seems like if someone ever played The Comedy Store (and have over five credits to their name on IMDb) they’d be a talking head in this doc. 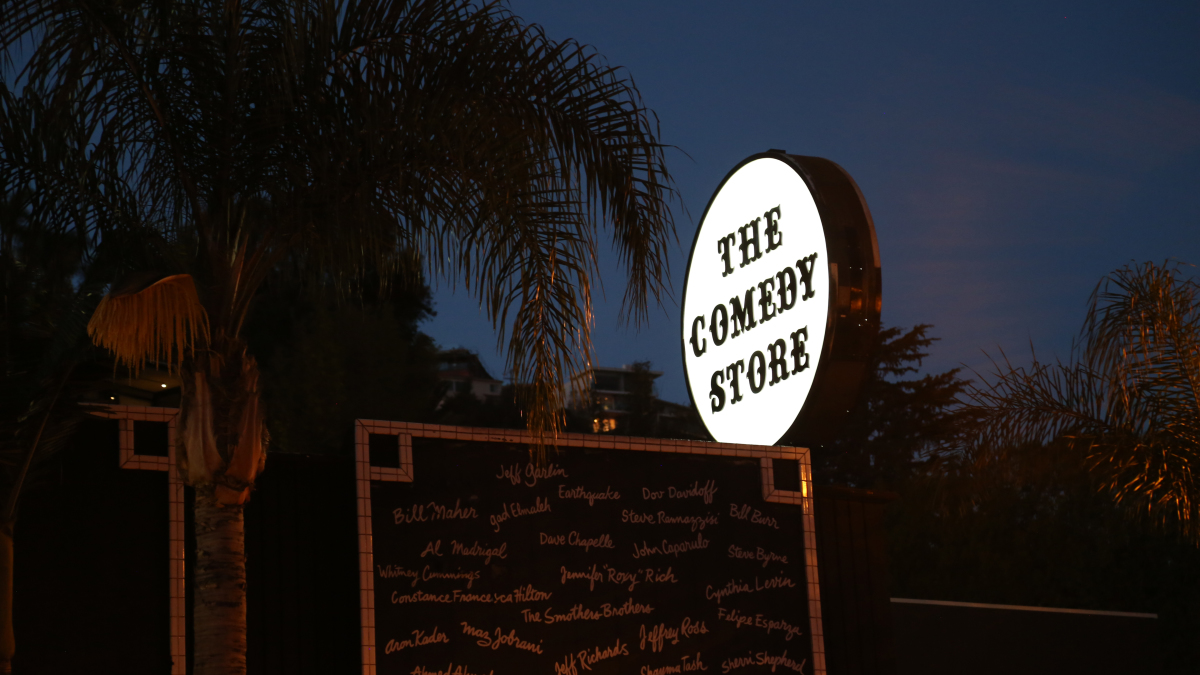 But the cavalcade of stars on display is what makes the interviews themselves so disappointing. To say Binder’s interview style is relaxed would be an understatement. There is no propulsion to his back-and-forths, which is troubling when these interviews account for the lion’s share of the documentary. There are pauses, especially in his conversations with that aforementioned crop of comedians, that feel as if they’re being captured for a nature documentary or stock footage site (“Two Sexagenarians Awkwardly Converse About The Good Ol’ Days”). This is likely purposeful — a choice meant to harken back to those same comedians shooting the shit backstage — but it ends up feeling listless. And with not enough archival footage to fill the gaps and give all the context needed, these hourlong episodes tend to drag.

The history of The Comedy Store is fascinating. And in some ways it feels like trying to cram it into five hours is a fool’s errand, but if that’s the case, shouldn’t everything included demand that same level of interest? Too often, a tangent will take control of the loosely structured chapters or repetitive talking heads can drone on about a single topic. By the time the viewer hears a third old-timer recounting how great and unpredictable Tim Thomerson’s sets used to be, well, it all starts feeling like a documentary made by these older white comedians for other older white comedians.

And boy, is it white (and male). Obviously, any documentary attempting to tell the story of an entertainment institution over 40 years old is going to struggle for any kind of representational parity, but The Comedy Store’s almost exclusively white and male roster of alumni is an alarming reminder of just how far the industry has come (or conversely, how awful things used to be). Barely 15 percent of the talking heads are women (not including a brief cameo from Debra Winger, who never performed at The Store, but did date a comic).

BIPOC don’t fare much better, accounting for 16 percent of the talking heads, but worse yet are the storylines in which these under-represented comedians are showcased. In a sequence spotlighting the power the eccentric Shore wielded as gatekeeper for comedians wanting to “get passed” and become regulars, the first two examples are Tiffany Haddish being told she was “too pretty to be funny” and Damon Wayans recounting how Mitzi placed him against his will in a duo with a white comedian called Salt & Pepper (where he, sigh, was the pepper). And if there’s any vitriol in this documentary at all, it’s aimed at Carlos Mencia, he of the egregious joke stealing, and Eddie Griffin. Painted as the villain of The Store’s dark days, various talking heads call Griffin out for hogging stage time when Shore was sick and the inmates were running the asylum. (Binder even presses him on the issue, trying to extract a mea culpa.) Keep in mind, this extended shaming comes during the same episode in which Andrew Dice Clay’s misogynist Mother Goose schtick is given the same tired pass it’s been given for decades — that it’s all just a character — which is to say nothing of the choice to include Louis C.K. as an interview subject.

Yes, that’s right. Louis C.K. just pops up in this series, without mention of his misdeeds or a hint of shame. 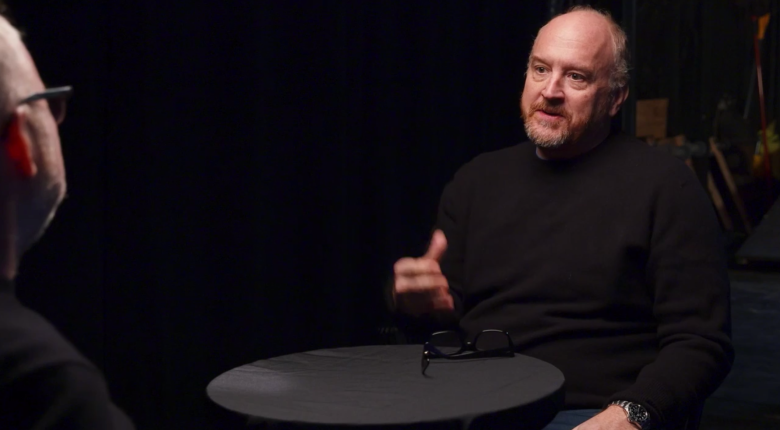 Louis C.K. in “The Comedy Store”

Choices like this make it seem like Binder is either out of touch or in over his head. Maybe it’s both. The first documentary in his oeuvre, “The Comedy Store” lacks any real purpose outside of very general cataloging of the 48 years The Comedy Store has been in operation. There are moments when it feels like the docuseries’ raison d’être is the sanctification of Mitzi Shore, but after the first episode she seems to ebb and flow out of the narrative and is mostly there for every comedian to trot out their canned Mitzi impression.

The episodes themselves take on a roughly chronological bent, as the first four map out the ’70s, ’80s, ’90s, and 2000s, respectively (IndieWire was provided four episodes in advance for review). They follow that general trajectory, except for the moments when — in an effort to mythologize the building as some eternal comedic wellspring — Binder chooses to draw parallels between a comedian from his “glory days” and someone from today’s current crop (and vice versa, in later episodes).

Given the access, history, and talent all inherent to The Store, the docuseries isn’t all bad. The pilot, potentially the strongest episode of the bunch, includes: a fun section where Marc Maron and Binder rummage through Mitzi Shore’s office (allegedly untouched since she passed in 2018) like two kids alone in dad’s shed; an amazing introduction to Michael Keaton’s stand-up career (which will come as a surprise to most viewers); and a touching tribute to Freddie Prinze, which showcases the immense talent’s meteoric rise from Comedy Store regular to “Chico and the Man,” before his tragic death. 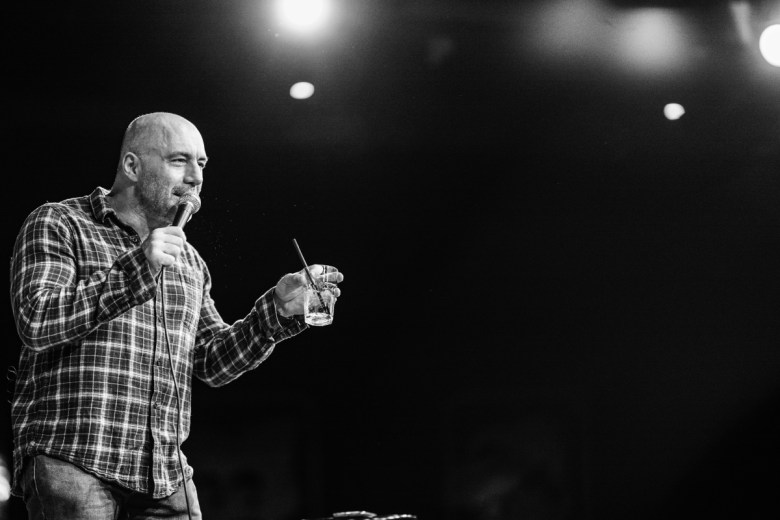 Joe Rogan in “The Comedy Store”

This last sequence, scored by Jackson Browne’s “For A Dancer” becomes the closest thing to a recurring motif the series has, with the second and third episodes including similar tributes to Richard Pryor and Sam Kinison, underscored by Stevie Wonder’s “Ribbon In The Sky” and Guns N’ Roses “Patience,” respectively. The fourth episode, eschewing the trend set by its predecessors features no such eulogy, but rather a somber performance of Simon & Garfunkel’s “The Boxer” over Joe Rogan getting teary-eyed about his triumphant return to The Store after his dustup with Mencia and the moment that Mitzi “passed him.”

Rogan, who dominates the narrative of the fourth episode, casts an eerie metaphor for The Comedy Store when talking about a comedian he used to love seeing there. “I love Roseanne. She’s great. She’s scared to do it now. They’ve told her, ‘if you keep saying crazy shit.’ She’s worried they’ll take away her residual money. What made Roseanne great is that she was wild and reckless, same thing that made Kinison great. And sometimes that goes wrong.”

Sometimes that goes wrong, indeed. Had “The Comedy Store” been more focused on story and less on free-wheeling chats, it might have accurately captured The Store as Binder and so many other comedians see it. But, as such, what the viewer is continually told was wild and reckless, more often than not, comes off as mild and feckless.