Bradley Walsh, 60, was once again on hand to help four quizzing amateurs take on Mark ‘The Beast’ Labbett, 55, in order to get their hands on some cash. The Chase host welcomed the first contestant, Becky, to take on the quizmaster, and she seemed eager to get the jackpot rolling. It was when the presenter and the player were having a spat over whether a question was related to history or geography did the ITV show star mock her, leading the contestant to tell him it “wasn’t a laughing matter”.

The moment came after Becky had completed her cash-builder round and was set to become the first player to take on The Beast.

When the head-to-head round got underway, the contestant was asked: “Who is credited for introducing vanilla to Europe?”

Three possible answers to the question which Mark and the quizzing amateur had to chose from included Walter Raleigh, Vasco da Gama and Hernan Cortes.

With the question at hand being a crossover between geography and history, the host and player had a spat over which category it fell under.

As the pair continued to squabble, Becky was ready to hear the answer, to which Bradley remarked: “Don’t change the subject.” 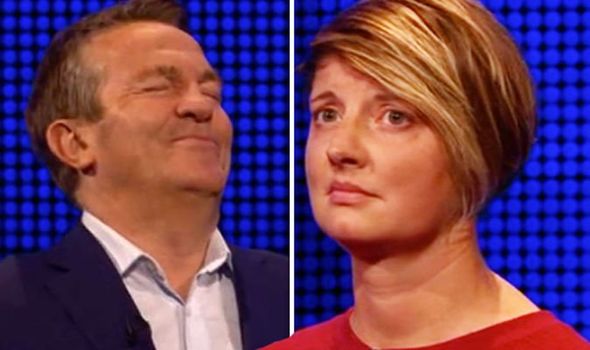 Bradley was quite pleased with himself over the joke he made, albeit being at the contestant’s expense as she was clearly annoyed.

The Beast also saw the funny side of the joke as he applauded Bradley’s quick wit.

“It’s not a laughing matter,” she told the host before he proceeded to reveal the answer.