'The Office': 3 Times Relatives of the Cast Made It Into Episodes

The best Zulily deals to shop this week, according to our editors

Less Than 9% of Beauty Products Are Recycled, but Nordstrom's New Program Aims to Fix That

Steph, 38, was finally in a studio in Leeds to launch her self-titled chat show Steph’s Packed Lunch after the coronavirus pandemic put proceedings on hold earlier this year. The Channel 4 lunchtime show managed to operate from the journalist’s home back in April, where the broadcaster spoke with her co-stars via video calls. However, she was joined by a plethora of guests on her programme on Monday and it was a quip about Boris Johnson, 55, made by comedian and actor Angus Deayton, 64, which left her in hysterics. Though he jokingly snapped at her later on in the episode when she probed him about his personal life.

Angus’ role on the show was to give a satirical view of the day’s headlines, discussing matters from coronavirus to pet parrots.

With Monday marking the implementation of the Prime Minister’s rule of six to combat the spread of COVID-19, the comedian thought he’d reference the topical point.

The actor said: “Gatherings of more than six are now banned – which is a killer blow to the planned reunion of S Club 7.

“And it also means Boris Johnson can’t meet up with all of his children for lunch for a few months,” the comedian jibed, with Steph heard laughing in the background.

As the Prime Minister and his fiancée Carrie Symonds, 32, having had their new-born son baptised this weekend, the funnyman added: “It was a small gathering of family and friends.” 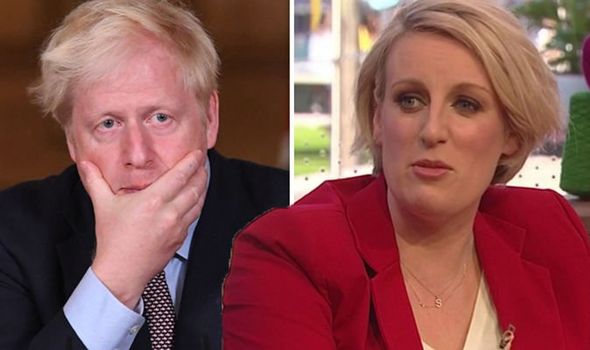 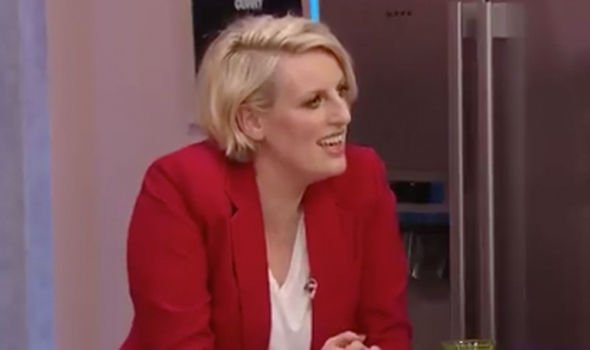 Clearly finding Angus’ new segment amusing, she noted: “I’ve been looking forward to you doing that.”

The shut down didn’t come until the presenter had a general conversation with Angus, stating it must be a “great time” for stand-up comics to get material with so much happening in the news.

Knowing the actor had travelled to Leeds especially to appear on the show, Steph asked: “How was your first night in Leeds?”

Jokingly hitting back, he replied: “None of your business,” with his dry humour once again leaving her in tears of laughter. 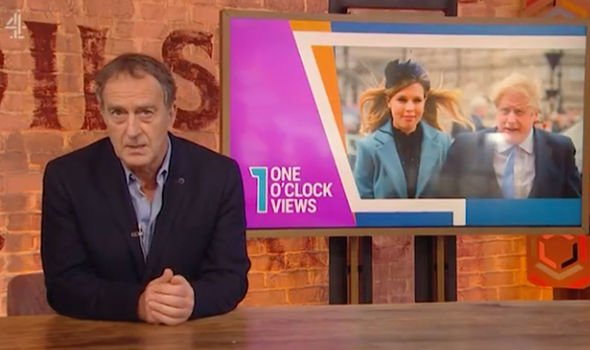 None of your business

Eventually, the comedian did reply as he told the host he arrived over the weekend when the city was still celebrating their football team’s defeat to Liverpool on Saturday.

Asking which team she supported, the Newcastle-born presenter said she “didn’t want to talk about it” and quickly moved the conversation on.

Taking to Twitter, those watching at home commented on Steph’s return to screen following a four-month hiatus.

One posted: “Not too bad so far…finding the camera cutting to a laughing person in the studio quite annoying though #packedlunchc4.”

Another added: “Nice to see TV shows coming from Leeds. Glad Channel 4 chose us as their base. #packedlunchc4.”

A third commented on the social media platform: “Loving @PackedLunchC4 so far! #PackedLunchC4.”

Steph’s new career venture comes just months after she gave birth to her first child and daughter with her partner.

However, the presenter has opened up about some of her worries about becoming a mother, revealing “night terrors” continue to be a hurdle she has to overcome.

Can’t see this Brexit poll? Click here to open in your browser

Having suffered from them as a child herself, the broadcaster explained: “As I’ve got older, they have become more vivid. And since having a baby, I will regularly wake up and think I’ve lost her.

“I don’t ever actually feel stressed but the way it manifests in me is at night,” the journalist told The Sun.

With the dreams also revolving around her role on live television, the presenter has said she has sought professional help.

Although this has not cured her night terrors, she explained to the publication it has given her mechanisms to cope with them.