The video above was produced by IndieWire’s Creative Producer Leonardo Adrian Garcia.

Over the past year or so, Seth Meyers has taken NBC’s “Late Night” on some type of agoraphobic road show. Driven from NBC Studio 8G by the global pandemic that forced the entire world to huddle, isolated in their homes, Meyers and the crew at “Late Night,” like so many late-night talk shows, endeavored to keep on keeping on, come hell or no haircuts.

And so the show went on. At the start, “Late Night” went on a sort of walkabout in Meyers’ home, recording in a hallway, a garage, his in-laws’ basement, and his attic. If nothing else, they captured the clawing-the-walls cabin fever that afflicted so many people while sheltering-in-place.

Now, Meyers and friends are back in the studio after their long, strange, largely stationary trip, but “Late Night” without its studio audience is a very different iteration of itself than it was 13 months ago — and arguably, it’s for the better. What better man to detail precisely how and why the transformation took place than the host himself, who joined IndieWire’s Millions of Screens podcast recently to discuss what a wild ride it’s been. While the entirety of the video is shared above, here’s just a taste of what Meyers had to say about the show’s rebirth.

Callbacks and Connecting With the At-Home Audience

“I think the main thing — and I’ve thought about this a lot too because it started happening naturally — is I think most people who watch a late-night talk show, watch it more often than not. They’re returning customers. And certainly our crew, which is our only in-studio audience, they’re there every night,” Meyers said.

“So the only time when you do a talk show where you have people who probably didn’t see last night’s show, is when you have a live studio audience. A lot of times those are people who just want to go see a talk show and they have fun! But there’s a huge risk if you call back a Monday joke on a Tuesday show for a live studio audience — it will fall flat — but it would probably work for the people at home. Weirdly, by taking out a studio audience, that’s what allows you to build in these infrastructures of recurring jokes and callbacks.”

“You mentioned the ‘Thorn Birds.’ The ‘Thorn Birds’ came about because a bunch of people commented to me about it being on the bookshelf. I didn’t even know it was [there]. And I don’t know if it was that I’d paid more attention to comments during that time where I didn’t have a studio audience because there wasn’t any feedback from a live audience, but so much of this past 15 months has been bits that are born out of engagement with our at-home audience.”

“I’ve said it before, but I feel so much closer to them. Because there’s nobody else. I knew I was doing the show for them, but now it just hammers home exactly how much that’s the case.” 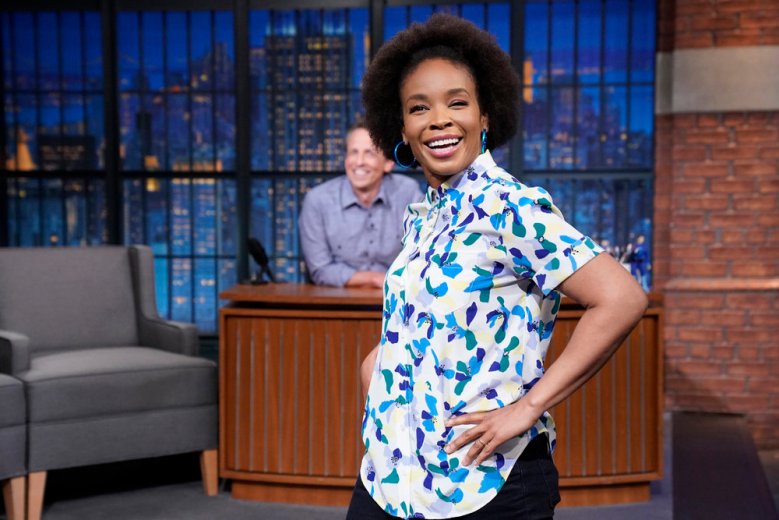 The Joys of Producing

“Our plan as far as having a production arm for a show like this was to try to create space for people that were, No. 1 talented, and No. 2 self starters. The thing about [‘The Amber Ruffin Show’] is we knew if Amber and Jenny [Hagel] started a show, based on what we saw from them here and the way they were self-starters on our show, they would be immediately thriving, if given that opportunity. So whereas [Mike] Shoemaker does go every Friday, and he’s in studio when they’re shooting, I don’t have any sort of day-to-day involvement with Amber’s show, which is not out of the laziness or a lack of caring, it’s just total confidence that she can do it.”

“It’s the same way with ‘A.P. Bio.’ Mike O’Brien is the kind of guy that we knew from working with at ‘Saturday Night Live,’ who would not need any help from us at all. So basically, the role we serve is to vouch for him and if there’s ever a time that we can help on a network level. But they’re such pros, they’ve figured out the network politics pretty quickly, as well. So they don’t really need our help much.”

His Newfound Love of Impressions

“When I was at ‘SNL’ I got so tight. Anytime I had to do an impression, I worked on it way too much. I watched way too much tape. And I don’t think there was ever any joy when I would do it. I think sometimes I could do one that was fine. And if there was a good joke, if it was written to be funny, I could say the words and get a laugh. I now put no thought into these impressions at all.”

Regarding his Vince Vaughn impression: “I hear the criticisms, but I also want to stress no thought goes into it, other than the fact that I love Vince Vaughn, and I’m very happy when I talk like him. So that has been the joy of this, having come from a place where when you do an impression, there’s a wig and there’s wardrobe and there’s makeup and there’s all these things that make you think it has to be a professional impression, whereas now it’s just the freedom to be very stupid. And it’s a lot of fun.” 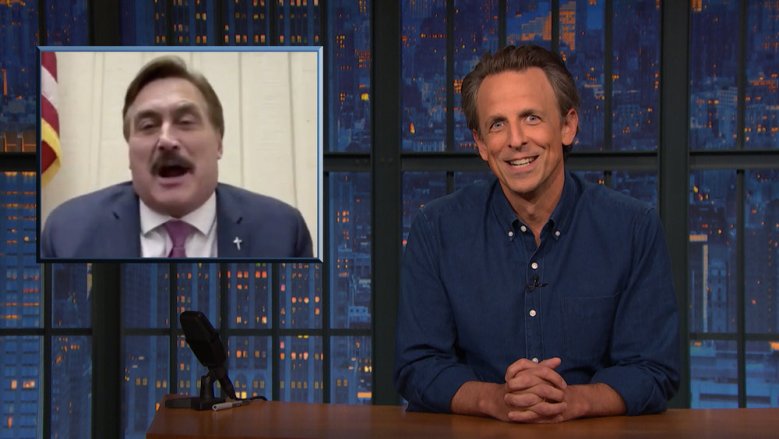 The Single Sadness of the Bygone Trump Era

“We genuinely don’t miss Donald Trump, but we do love when his sort of secondary cast of characters pops their heads up. We do have a bottomless pit of delight with the machinations of Rudy Giuliani and Michael Lindell. So when people are like, ‘Do you miss Trump?’ It’s like no, no, no. But when his old friends stop by, we don’t mind.”

“Again, [Alex] Baze wrote the joke in yesterday’s show, I can’t remember the exact wording of it. Something along the lines of like, ‘Look, we’ve had no reason, literally no reason, to talk about ‘Wedding Crashers.” And then he pointed out ‘No, the reason is there’s nobody here to tell us not to.’ A lot of our show now is that there are no stop gaps. People always say ‘Do you miss laughs?’ and across the board I’m like, ‘Yes, of course. But I don’t miss them as much as how much I hated hearing a joke not work.’ Now the baseline is they all don’t work, which is the best.

“I know, it’s a weird thing to say, but I think a lot of people probably found that on top of the fear and trepidation and loneliness of this year that there has been some sort of liberation in work — just because you’re out of the structures are so used to.”

For every moment of our interview with Meyers, tune in to this week’s episode of IndieWire’s TV podcast “Millions of Screens” with Creative Producer Leo Garcia, Deputy TV Editor Ben Travers, and TV Awards Editor Libby Hill. Then, stick around as Ben, Libby and, yes, even Leo make their cases for their favorite Variety Talk and Comedy series with the opening of Emmy nomination voting.

“Millions of Screens” is available on Apple Podcasts, Breaker, Google Podcasts, Spotify, and Stitcher. You can subscribe here or via RSS. Share your feedback with the crew on Twitter or sound off in the comments. Review the show on iTunes and be sure to let us know if you’d like to hear the gang address specific issues in upcoming editions of “Millions of Screens.” Check out the rest of IndieWire’s podcasts on iTunes right here.