Spoiler alert! Do not proceed if you have not watched the season 2 finale of Nancy Drew.

How’s this for a shocking turn of events?

Just when Nancy Drew appeared to settle the literal demons of her past and present, an unexpected wrinkle presented itself in the final minutes of Wednesday’s season 2 finale: Temperance is back (younger!) and ready to wreak some major havoc on Nancy and her friends. Could it be her at Nancy’s door at the end of the finale? While we’ll have to wait several months to get answers to that question and more, executive producer Noga Landau hints that Temperance as the new “big bad” for season 3 pushes Nancy to confront new sides of herself.

“She is someone who is truly a match for Nancy. If Nancy is the Luke Skywalker, she really is the Darth Vader,” Landau tells ET. “We’ve explored Nancy versus mysteries, Nancy versus ghosts, Nancy versus other people from time to time. But we really never pitted Nancy against a super manipulative, 200-year-old ancestor who can really manipulate her in a way that only people can do to each other.”

“The journey that Nancy is going to go on is realizing that even very powerful enemies do have weak spots and she will slowly start to unravel what that will be for Temperance,” she adds.

And what about George’s impromptu marriage proposal to Nick? Or Nancy’s new living situation with her two dads, Carson and Ryan? Or that sweet moment between Nancy and Ace? Landau and fellow executive producer Melinda Hsu Taylor break down the biggest developments from the sophomore finale as they look ahead to the new season.

ET: We have to talk about the twist at the end of the finale because it’s a massive shift for season 3. Can you talk about the thought process behind the decision to have a young Temperance be the main antagonist for the Drew Crew?

Melinda Hsu Taylor: One thing we really love about this twist is that it introduces a villain who is not ashamed of being a villain and who was going to be tremendously fun to watch, and love and hate at the same time because this villain is the sort of person who says the things that everybody wishes they could say and who’s very open in a lot of ways about their agenda and is like, “What did you expect? I’m the villain.” But also brings out a lot of relationship stuff for Nancy, a lot of humanity and how Nancy sees herself in the world and always ties into Nancy’s relationship with the town itself, which is a big part of season 3. I would also say that even though this villain is supernatural and has a lot of big mythology behind her, we’re always going to keep our stories very grounded. And we may walk right up to the edge of something that feels like a great big genre swing, but it will always stay in the world of a small-town girl who solves real mysteries, as well as dealing with the forces of the supernatural.

What are you most looking forward to in leaning into a villain who’s not afraid to be bad and has an edge to her?

Noga Landau: What’s exciting about Temperance as a villain in season 3 is that she is someone who is truly a match for Nancy. If Nancy is the Luke Skywalker, she really is the Darth Vader. On the show, we’ve explored Nancy versus mysteries, Nancy versus ghosts, Nancy versus other people from time to time. But we really never pitted Nancy against a super manipulative, 200-year-old ancestor who can really manipulate her in a way that only people can do to each other.

From what you’ve set up here, she’s going to be an incredibly formidable force and one who might be difficult for Nancy to deal with. Can you offer a preview of what she’s up against next season?

Landau: Temperance so has the upper hand on Nancy in every way at the jump of the season. Not only has she been around for over 200 years, learning how to manipulate everyone she meets, but she’s also — from a cult perspective — powerful. Nancy is not a magician. Nancy is not a wizard or a witch. She’s just a normal girl. And what Temperance is able to do supernaturally is very frightening and very powerful. It’s also part of her Achilles heel. And I think that the journey that Nancy is going to go on is realizing that even very powerful enemies do have weak spots and she will slowly start to unravel what that will be for Temperance. 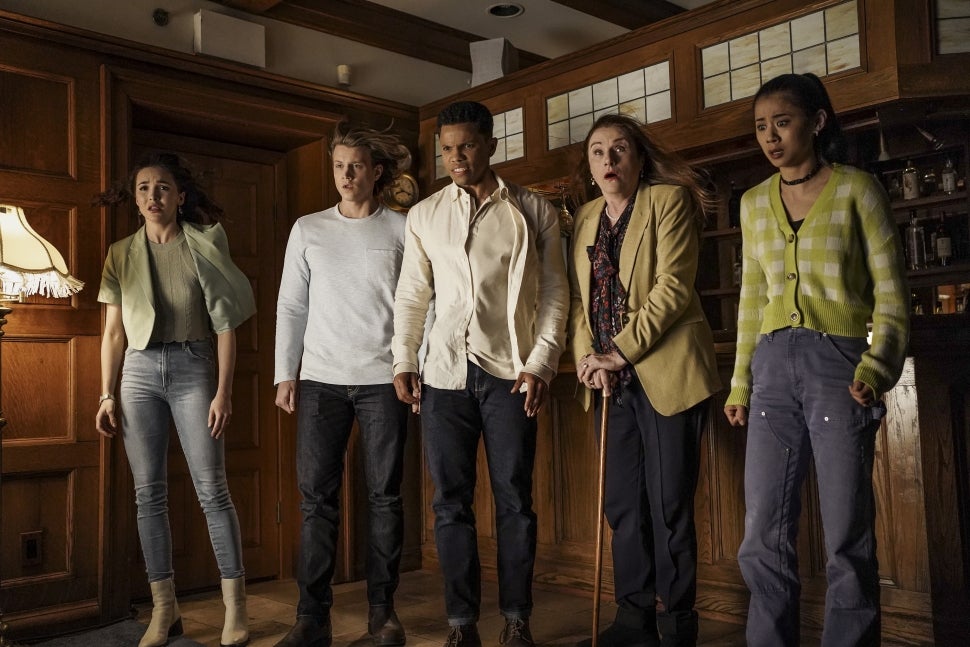 George proposes marriage to Nick. What challenges await them now that that they may be walking down the aisle?

Hsu Taylor: Everybody loves a wedding and everybody loves wedding planning. And they are very young, and I’m not sure that we’ll look at them all the way to being a settled married couple in the new season. Some of the drama in the season comes from exactly what happens as the wedding planning gets underway. On a character level, it’s really interesting to examine what people think of themselves in a couple. And I just have a meta commentary on how much I think young people, often young women, put in the idea of a diamond ring and the importance of marriage — not to discount the importance of marriage — but it’s also a time when, in a 19-year-old’s life, or an 18-year old’s life they should also be exploring who they are and who they want to be in the world.

But George feels like, “Well, my lifespan is only 10 years, then I need to do everything all at once.” So that’s some of the emphasis and some of the urgency for her, but also it’s going to bring out things in her life, like her relationship with her sisters, her relationship with her absent father. We might find out more about him in the new season. Ultimately, there will be some complications that nobody foresees that lead to heartbreak, but ultimately more self-realization that I think will be satisfying, but also not close the door on their relationship status. That’s kind of vague, but it’s a very rich territory.

Will Gil and Amanda Bobbsey stick around for season 3 or still have a presence?

Hsu Taylor: We’ll feel their presence in the world. There are all these schedules to figure out and what stories unfold, but we love them. And we’re delighted to have them with us in season 2 for sure.

Ace and Nancy have a bit of a moment in the finale. What did that scene represent and how does it move things forward or not?

Landau: We love the Nace nation. We love all of our shippers for all of our characters, but there is something very special about Nancy and Ace because their relationship is founded on friendship and mutual respect, and the fact that they really care about each other. Whatever feelings they might be harboring for each other beyond friendship are not feelings that they want to let themselves act on haphazardly. There’s nothing casual, especially for Nancy, about the way that she feels about Ace. It might be a minute before anybody works up the courage or the life experience to try and make something else happen. There’s this unrequited feeling between them.

Hsu Taylor: Ace is in a relationship with Amanda, and he’s loyal. And Nancy is not going to disrespect another woman, let’s put that out there. But in our writers’ room, we frequently have lively debates about when certain things should happen and sometimes you’ll see people in the Zoom chat interjecting, “But Nace, I need to be fed, escalation point!” And then later on in the same session, the same person will interject in the chat, “I am fed.” In caps.

The Tom Swift backdoor pilot earlier this season was well-received. Have you heard any rumblings about where the status of that spinoff is and are you optimistic that even if the show doesn’t get picked up, we’ll still see that character pop in and out of the show?

Hsu Taylor: All that we know for sure is that everyone loves Tom Swift and everyone loves Tian Richards [the actor who plays Tom]. What more can you ask for? I think the ultimate decisions are many, many layers above us, and we’re very hopeful. But we don’t know what the future holds.

For more on Nancy Drew, watch below.

To stay up to date on breaking TV news, sign up for ET’s daily newsletter.