Episodes of the Australian edition will be paired with quarantine spinoff “Married at First Sight: Couples’ Cam” 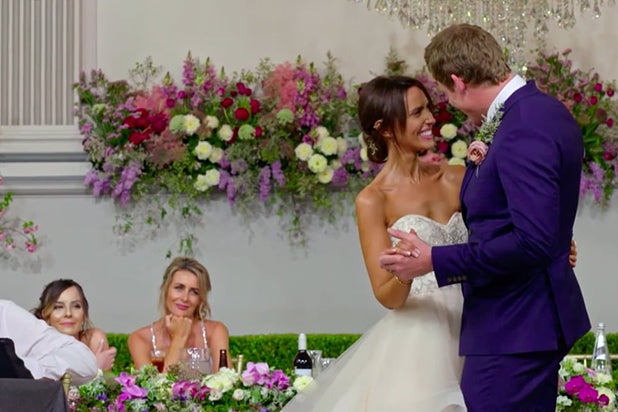 Lifetime will air episodes of the Australian version of “Married at First Sight” starting next month, the network announced Wednesday.

The import, which originally aired on Australia’s Channel Nine and is also an adaptation of the original Danish version of the show, will come to Lifetime on the heels of the “Married at First Sight” Season 10 reunion, airing tonight.

Lifetime will air two-hour episodes of the show every Wednesday and Thursday night, beginning on May 27.

The “Married at First Sight” franchise has been a success for Lifetime, and the decision to expand the slate by importing the Australian version comes at a time when networks are in search of new content to air while the coronavirus pandemic is keeping everyone at home. Earlier this month, Lifetime also ordered the spinoff “Married at First Sight: Couples Cam,” which will follow fan-favorite couples from the show using home video footage. It is set to premiere May 20.

Read the couples’ bios below.

Aleks & Ivan
Aleksandra, born and raised in Perth, WA, grew up in a strict Serbian household and although her parents disagree with her participation in the experiment, she feels the dating pool in her town is too small to meet Mr. Right. Driven, fiery and outspoken, Aleks knows exactly what she wants in a relationship and is ready to get married and settle into the life she has always imagined for herself.

Ivan is a Ukrainian-born straight shooter with traditional family values. The Sydney-based real estate agent is hard-working and ambitious with strong opinions. Although he is direct, underneath his tough exterior is a sentimental romantic who believes in true love.

Tash & Amanda
Tash, a bartender and yoga teacher from Adelaide, SA, can come off as intimidating to others considering her dark hair and striking tattoos. She hopes to find someone who is affectionate and expressive with their emotions.

Amanda, a self-proclaimed alpha-female from Melbourne, VIC, is searching for a woman to love deeply and equally. Her European family has not always been accepting but more than ever, Amanda is ready to find her soulmate.

Cathy & Josh
Cathy, a logistics investigator from New Zealand, is living in Sydney away from her family. Despite her glamorous appearance, she is down-to-earth and friendly and is looking for an honest and loyal partner she can finally let her guard down with.

Josh, an industrial operator from Sydney, always loved being the life of the party. Now, he regrets losing the one who got away while he wasted time partying instead of dating. Ready to settle down, Josh is vowing to never let love escape him so he can find his forever relationship.

Connie & Jonethen
Connie is an aspiring marine biologist from Melbourne who has been single for five years. Uncomfortable around men, she spends her time focusing on studying to avoid feeling invisible. Although her mother is against her being part of this experiment, she is determined to find her soulmate, with or without her family’s blessing.

Jonethen is a fun-loving guy living on the Gold Coast with a job that he feels has inhibited his ability to find “the one.” He has found it difficult to maintain any relationship beyond a few months. Jonethen is one of five boys from a close-knit family and he now believes it is time to mature and find a girl to settle down with for the long term.

Hayley & David
Melbourne native Hayley suffered from a drug addiction ten years ago but has since turned to health and fitness to pull her out of darkness. Although this has had a huge impact on her life and relationships, she is ready to show her vulnerability and be loved by someone who accepts her, past and all.

David is a former boxer from Melbourne who now drives trucks for a living. When he isn’t working, he is training his two horses on his farmland. David’s parents are traditionalists who are skeptical of his participation in this experiment. Although their approval is important to him, he is willing to try anything to find a special connection again.

KC & Drew
KC worked as a dancer in Los Angeles for 10 years before making the decision to move back home to Sydney with the hopes of finding love. Although she enjoyed her Hollywood lifestyle mixing and mingling with A-listers, she is finally home and ready to find someone to settle down with.

Drew, a musician with a big heart, enjoys a simple life and loves his laid-back lifestyle in Cairns, QLD where he runs a mental health charity. Although he receives no shortage of attention from woman, he hasn’t allowed himself to be vulnerable with anyone since his called off engagement four years ago.

Lizzie & Seb
Lizzie, who appeared on a previous season of Married at First Sight: Australia, is back for a second chance at finding love after being betrayed by her husband. Although she tried to make it work with her previous groom, Sam, she later found out he was cheating on her with another bride in the experiment.

Sebastian, a semi-pro ALF player and personal trainer from Newcastle, NSW, has been single for eight years and has only had one serious relationship. As a sensitive soul and deep thinker, he is really hoping to get to know someone on a deeper level.

Mishel & Steve
Mishel, a young in spirit mother of two grown kids from Brisbane, Qld has suffered her fair share of heartache, including her divorce 15 years ago. She openly shares details of her dating disasters, admitting she has been cheated on in seven of her past eight relationships. Mishel finds the dating landscape increasingly difficult to navigate at her age and is hopeful the experiment will put an end to her quest to find a man who embraces her for who she is.

Steve, a cancer survivor from Melbourne, Vic, is originally from the UK. He’s lived in Australia for the past 18 years and has a son in his 30s who still lies in England. He feels his life is sorted out other than his constant fear of spending the rest of his life alone and that has him finally making a change.

Natasha & Mikey
Natasha is an outspoken and bold businesswoman from Sydney who has always dated men who are significantly older than her, including her ex-fiancé. Determined to break the cycle of feeling like she is just arm candy, Natasha is looking for a good man who will treat her as their equal.

Mikey is from Sydney and has a solid work ethic, recently stepping in to help run his family’s business, a nursing home founded by his grandfather. Mikey carries a self-assured façade but lacks confidence when it comes to interacting with women.

Poppy & Luke
Poppy, a mother of two-year-old twin boys from Wollongong, NSW, has endured her fair share of heart-crushing disappointment when it comes to love. Self-deprecating, outspoken and funny, she often uses comedy to hide her pain. Since her number one priority is her sons, Poppy decided to do the experiment to find a soulmate and a good and dependable man to be a role model for her sons.

Luke, a hard-working single dad of two teenage daughters from Melbourne, has his work cut out for him when it comes to finding time for dating. Previously married for 10 years, he is focused on providing a solid life for his daughters as he continues to put his family first and prioritizes homelife above everything else. Luke is finally ready to put his heart on the line for someone else.

Stacey & Michael
Stacey, a law graduate from Adelaide, SA, has two kids and a broken engagement, and has been scared to let someone else in because of her past family trauma. Now, she finally feels ready to let her walls down and give herself another chance at love.

Michael is a single dad from Adelaide, SA who became a billionaire at 24. He’s now ready to enter a relationship with a woman who will help keep him in line and be able to handle his sense of humor.

Vanessa & Chris
Vanessa, a pharmacy manager from Perth, WA, shields herself from hurt by rejecting men before they reject her. She hopes the experts can find her someone to look past the scars and love her the way she wants to be loved back.

Chris, a single dad of two young boys from Adelaide, SA, has always pictured the perfect family unit for himself, much like his parents who have been married for 38 years. Heartbroken following two failed engagements, Chris is determined to find the woman who will complete his ideal family portrait.