The joyous fourth movie in a death-defying franchise that continues to find the sweet spot between “Magic Mike XXL” and “Salò, the 120 Days of Sodom,” Jeff Tremaine’s “Jackass Forever” opens with a sequence that accurately sets the tone for the motion picture magic to come. As with all of the sketches that compose this plotless clip reel of brilliant American idiocy, you know that something foul and/or unfathomably painful is about to go down in the cheesy “Godzilla” parody that kicks things off — longtime “Jackass” fans might even be able to guess what it will be — but it still hits with a childlike wave of wonder and revulsion when you see it unfold. It’s no wonder that the film’s biggest laugh comes when someone reacts to a wildly elaborate prank by shouting, in all sincerity, “I knew that was gonna happen!”

In this case, the gag is that the kaiju terrorizing downtown New York is actually Chris Pontius’ flaccid penis (painted green and puppeteered on strings with on-screen help from “Being John Malkovich” director Spike Jonze), and the monster’s legs are played by his wrinkled balls, which groan in response to the miniature rockets fired at them by ringleader Johnny Knoxville and other members of the cast. This will not be the strangest torture inflicted upon Pontius’ junk during the film — a film in which it’s actually Steve-O who suffers the worst of the genital hijinx, thanks to a stunt that I memorialized in my notes as “Candyman’s dick” — but it anticipates a work of art in which nostalgia and shock go as well together as old friends and pig ejaculate. Sometimes there’s so much beauty in the world I feel like I can’t take it.

For those of you ignorant of American history or otherwise living with your head up your ass (a feat of self-abasement that would earn anyone a spot in Tremaine’s cast), “Jackass Forever” is the first time since 2010 that the Knoxville Family Circus has brought their winsomely violent brand of “don’t try this at home” fun to the big screen. For us in the audience, that “getting the gang back together again” vibe is so visceral that even “Jackass” newbies might feel the warm buzz of catching up with old friends. And while their antics are still as fresh as they were on MTV in the early 2000s — still capable of triggering the same profound degree of pure lizard-brain, Santa Claus is real and he’s felching delight in the post-Logan Paul era as they were in the days before Knoxville’s stunts helped give birth to YouTube — those friends have definitely gotten old.

“Jackass Forever” isn’t in denial about that, but the beauty of this skate-or-die geek show is that Tremaine also refuses to let age taint the brand’s core essence of eternal boyhood; everyone has gotten older (and former “Jackass” mainstay Ryan Dunn has died), but no one has grown up. Knoxville’s hair is often seen in its natural silver, but his Tyler Durden abs are still tight enough that he still needs prosthetics to disguise himself as Bad Grandpa. Steve-O’s gravely speaking voice has now gone full Nick Nolte, but it still sounds the same when he screams because someone has dropped a skateboard guillotine on his shins. If Pontius is the Paul Rudd of the group, he seems delighted by the idea that his balls might dangle a little more than they used to — just imagine the possibilities!

Here, in a film that is quite literally a documentary of its own making, age is less of a setback than a sweetener. Tremaine doesn’t shy away from the extra wrinkle of comic sadism that comes from watching 50-year-old men get electrocuted while they tap dance in top hats and tails, but he also doesn’t treat “Jackass Forever” with the same exhumed reverence that makes every streaming reboot or sequel series feel like a wax version of something we used to love. This film is perfectly at peace with just being more “Jackass,” and it seems pointed that its grand finale — a simple milk vomit stunt that evolves into a pyrotechnic extravaganza — doesn’t feel like a goodbye.

On the contrary, “Jackass Forever” is more interested in saying hello, as Tremaine allows for a natural influx of new blood without ever threatening his body of work. The bodies of the new cast members, however, are regularly subject to extreme danger. Veterans like Danger Ehren (the victim of a stunt that PETA has already emailed critics about) and Dave England may suffer the worst of it — and, as part of a tradition that seems necessary to balance the power dynamic of the group, it’s Knoxville who ultimately comes the closest to death — but rookies like Zach Holmes and Sean “Poopies” McInerney get hazed in all sorts of horrible ways. Each is shamed in their own ways; the former’s obesity is frequently used as a spectacle, while the latter’s beta male pastiness makes him the perfect target for so many of Knoxville’s pranks. Yes, everyone seems happy to be there, but watching a guy named “Poopies” get slammed in the nuts with a motorized sandal while his friends laugh hysterically from the comfort of a nearby couch is the kind of thing that makes you wonder if people only accept the love they think they deserve.

But “Jackass” has never been about making anyone comfortable, and that isn’t going to change now — not when a complete lack of censorship has become the franchise’s greatest advantage over its legion of imitators on TikTok. More to the point, “Jackass” has only endured through four presidential administrations because it so clearly prioritizes acceptance over cruelty. You always hurt the ones you love, so why not have the time of your life in the process of doing that?

These lunatics may never feel physically safe around each other, but the sensitive man-children who characterized a generation of Judd Apatow comedies would kill for the (pig) come as you are sense of belonging that Knoxville’s gang offers its members like a blood rite. That sense of belonging is shared between new and old cast members alike, but perhaps best embodied by the oldest new cast member of all, an arachnophobic ex-con named “Dark Shark” (father to Odd Future rapper and “Jackass” first-timer Jasper Dolphin) who gets roped into a traumatizing spider prank before gradually becoming part of the crew. 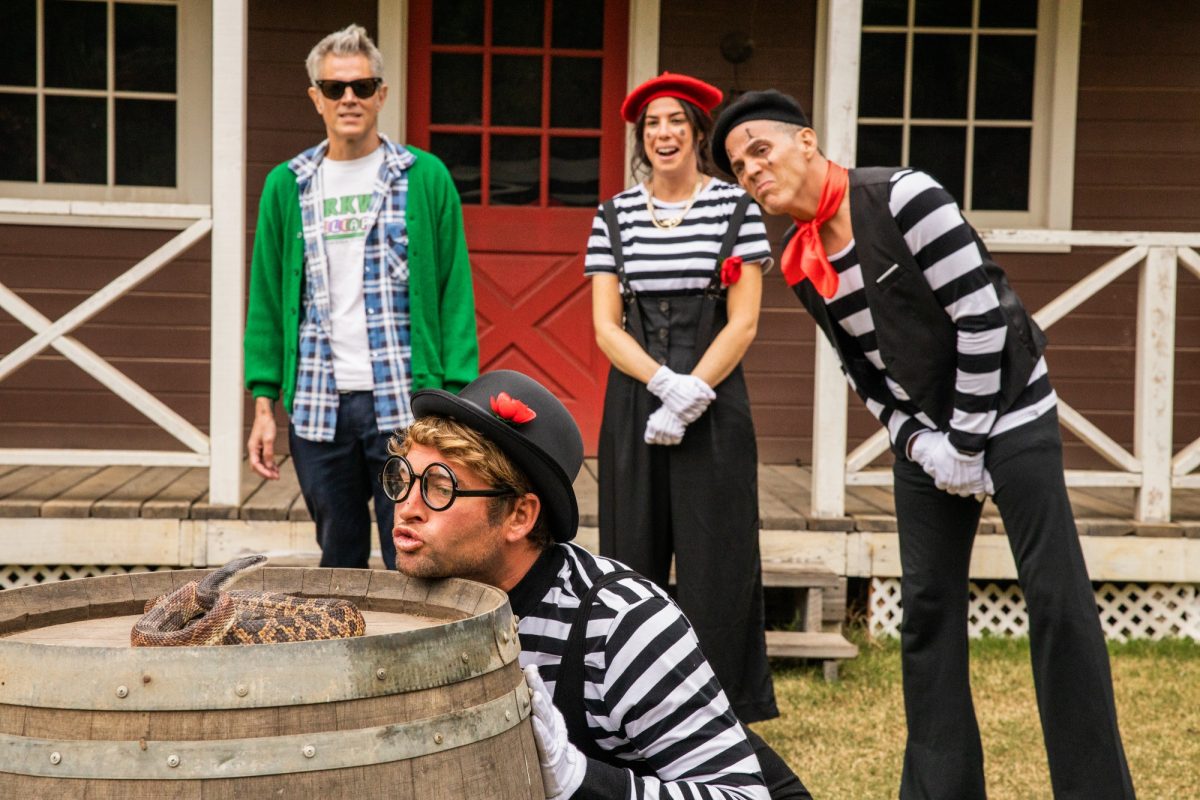 The only rookie who fails to leave much of an impression is Rachel Wolfson, who breaks the glass ceiling (and then effectively tongue-kisses the jagged shards) as the first lady Jackass. She’s a fearless performer who fits right into the group, but Knoxville and Tremaine seem flabbergasted by how to use someone who doesn’t have a scrotum to destroy, and Wolfson’s one major bit is a played-out gag that hinges on cheap plastic surgery jokes. “Jackass” has been seen as a protest against the numbness of late capitalism — as a way of salvaging a bone scrape of joy from the anhedonia of America’s suburban sprawl — but it also stems from the post-“Fight Club” moment when young men were looking to destroy the world in a way that brought them closer to each other. If “Jackass” was a product of its time, “Jackass Forever” is also a product of “Jackass’” time. That’s what’s sweet about it, and also what stops Treimane from achieving the kind of galaxy brain, “Fury Road”-level reinvention of this franchise that its genius demands.

Despite its new failures and familiar assortment of dud stunts (Wee-Man being launched onto a pile of metal is a pretty lame payoff to that musical chairs gag), “Jackass Forever” inevitably benefits from a stronger emotional undertow than any of the series’ previous films. It’s always been kind of beautiful to see these guys act like they’re going to live forever. Haunted by the absence of lost friends and facing a pandemic-fueled world that forces us all to confront with death on a daily basis, “Jackass Forever” is all the more powerful because it was made by — and for — people who know that they won’t.