In a small fishing boat on the sparkling Mediterranean, Alberto Scorfano’s eyes land on Massimo Marcovaldo’s right arm, which ends at his shoulder. Massimo catches him staring, and Alberto’s eyes bulge. Massimo glances down at his shirtsleeve, pinned up with a fish hook.

“A sea monster ate it,” he growls.

Massimo relaxes into a laugh. “Ma, no. This is how I came into the world.”

He reels in his fishing net, clamps an errant piece of driftwood between his teeth and slashes it out of the net with his left arm.

This scene, which appears about halfway through “Luca,” Pixar’s latest film (streaming on Disney+), takes the rare step of portraying a character with a limb difference — without making it a defining characteristic. Set in the fictional seaside town of Portorosso on the Italian Riviera, the story tells the tale of Luca Paguro (voiced by Jacob Tremblay) and Alberto (Jack Dylan Grazer), both young sea monsters exploring the human world.

Enter Massimo (Marco Barricelli) — Giulia’s single father — an imposing fisherman who sings along to arias on the radio while slicing off fish heads for dinner. At first glance, his stature and fishing spears intimidate the daylights out of the two boys. After the boat scene, though, the tides begin to turn: Luca and Alberto start to find their way into Massimo’s big heart.

Since the movie began streaming last month, the internet has applauded Massimo’s character for including a limb difference on-screen so deftly. The filmmakers said the decision for the fisherman to be born with one arm was very intentional.

‘We really thought long and hard on how to bring representation that was true to the place and the time,” the director, Enrico Casarosa said. “And so when the Massimo idea came up, I think we jumped on it pretty quickly.”

The film is set in postwar Italy, where Casarosa spent his childhood, and originally the director imagined that Massimo, modeled after the antifascist journalist Italo Calvino, fought with the Italian resistance in World War II. Perhaps he lost his arm in battle, Casarosa thought.

Or perhaps he was born that way. In contemplating the details of Massimo’s character, the “Luca” team — including Casarosa and the producer Andrea Warren — decided to consult the disability rights activist and filmmaker Jim LeBrecht.

“It was a real meaty conversation,” said LeBrecht, a co-director of the Oscar-nominated documentary “Crip Camp,” released last year.

Together, they came to the conclusion that the “this is how I came into the world” line felt right. Like Luca and Alberto, Massimo was born different. The fisherman handled his limb difference deftly his whole life, and remained a loved, respected and vital part of his community.

“Let’s get beyond these tragic stories, these old tropes, where someone with a disability is only in a story if it’s centered around their disability,” LeBrecht said. “And let’s do what we’ve done with other marginalized communities over the years, and simply say, ‘Look, we are part of the fabric of society.’”

LeBrecht was born with spina bifida, a condition affecting the spinal cord, and now uses a wheelchair. “Crip Camp” follows him and other former summer campers from Camp Jened in upstate New York, created for teens with disabilities, through their fight for accessibility legislation years later.

“Jim shared some very difficult stories with us about people reacting to his physical presence and kids asking,” Warren said. “But there is sometimes that interaction with kids looking or wondering.”

Those stories helped shape Massimo’s response when Alberto reacts to his disability. And it’s not an uncommon experience for those with limb differences.

Sheriauna Haase, 14, saw “Luca” the day it came out, while she was visiting Niagara Falls for Father’s Day with her family. (Her two brothers, ages 4 and 5, had been clamoring to see it all day.) 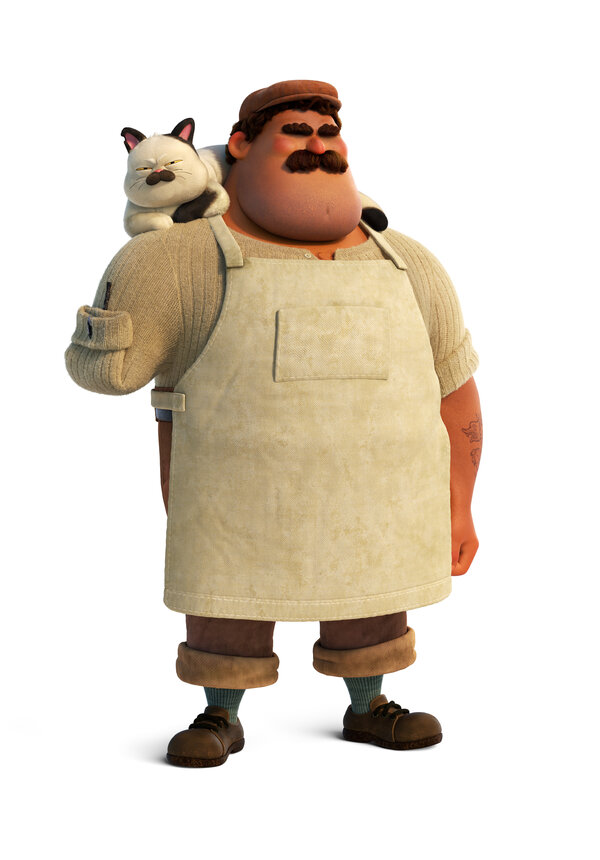 The rising high school sophomore and dancer is a congenital amputee; she was born without her left hand. She noticed the fishing boat scene right away and laughed at the line “a sea monster ate it.” She sometimes comes up with her own answers to “what happened to your arm?”

“If they were staring, I would be like, ‘Yeah, I actually got into a shark attack. My arm got bitten by a shark,’” Haase said. “And then I feel bad after, because the look on their faces is so shocked and scared. Like, ‘Oh my God, I’m so sorry.’ And I’m like, ‘No, I’m kidding, I’m kidding. I was just born like this.’”

Representation matters to Haase. And with almost 2 million people living without a limb in the U.S., Hollywood is starting to pay attention. But there’s a fine line between organic representation and forced tokenization, as the producer Warren pointed out.

“You can’t check every box on every film,” she said. “It needs to be authentic in order for it to be meaningful. That connection and that recognition isn’t going to happen if it feels like it’s some sort of token addition, something that got shoved in.”

But the authenticity portrayed in films like “Luca” only happens when people from the communities represented onscreen are also working behind the camera. LeBrecht hears stories every week from and about the disabled community that could make for riveting TV and movies.

“The industry has to apply the same diversity and inclusion efforts that they have for other marginalized communities toward the disabled community,” LeBrecht said. “It’s not Make a Wish. It’s not charity. It’s good business.”