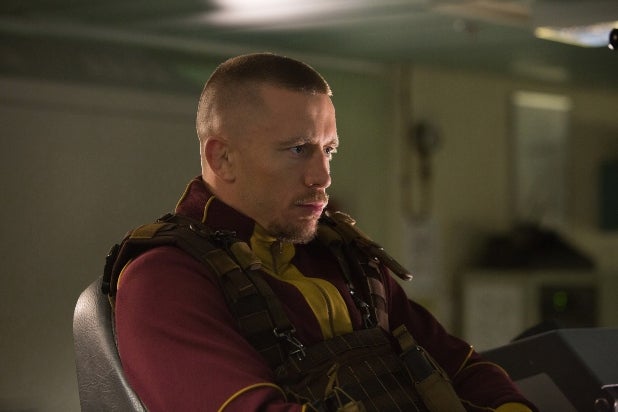 Georges St-Pierre’s return to the Marvel Cinematic Universe in “The Falcon and the Winter Soldier” was more successful than his first go-round with an Avenger, when he couldn’t last five minutes against Steve Rogers in “Captain America: The Winter Soldier.”

This time, St-Pierre’s Georges Batroc was even able to get the upper hand on one of Marvel’s heroes, when he executed a pretty nifty take down of Anthony Mackie’s Sam Wilson in that nearly 10-minute aerial combat scene from last Friday’s premiere.

Batroc, a mercenary who is now working with the criminal organization LAF, was ultimately unsuccessful in his plan of kidnapping an Army officer. But he was able to evade capture (by leaping out of a plan in a pretty sweet winged flight suit of his own) and lives to fight another day. St-Pierre, who is far more known from his UFC days in the Octagon, broke down how a difference in fighting style for Batroc helped him (briefly) get the upper hand on Mackie’s winged Avenger.

“In ‘Winter Soldier, when he when he fought Steve Rogers, because of his background in the comics, he’s a champion in Savate, the French form of kickboxing. He’s also a champion in Olympic powerlifting. That’s why he can leap so high, because he has very strong leg. But when he fights the Rogers, you can see he’s only using Savate,” St-Pierre told TheWrap. “When he fights The Falcon in the plane, he’s using a technique that we use in jujitsu and in wrestling called a power double leg takedown.”

That opening scene sees Wilson covertly help the Air Force in rescuing an Army officer after Batroc and LAF hijack a plane, attempting to fly it over Libyan airspace, which could have created an international incident. For a brief refresher, in “Captain America: Winter Soldier,” Batroc was the mercenary/pirate hired by Nick Fury to stage a hijacking of the Lemurian Star, which turned out to be an elaborate ruse to allow Natasha Romanoff to search the ship’s computers for classified information.

He escapes after going a few not-very-successful rounds against Captain America  in hand-to-hand combat, though he’s later apprehended. St-Pierre said that while he was “not expecting” to ever return to the MCU he was very aware of one of the golden rules of comics: “My character did not die.”

This time, however, St-Pierre teases we’ll see more of the guy known in the comics as “Batroc as the Leaper.” He occasionally was known to lead to his own team called “Batroc’s Brigade.” We’ll let you jump to your conclusions about this next quote from St-Pierre.

“If I may leave a message for Falcon. I can tell him that from now on, my brigade and I will be ready for you. And we’ll make sure that you don’t get lucky like this ever again,” he said.