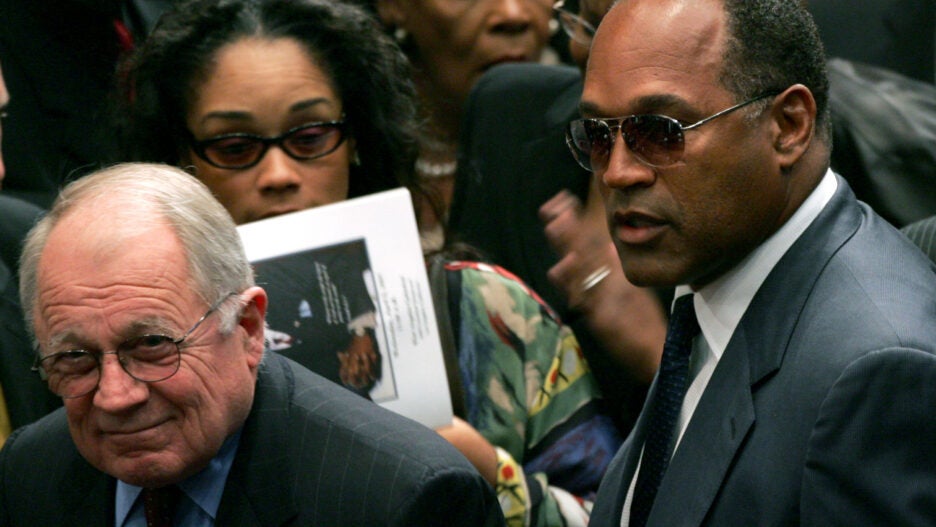 F Lee Bailey, the infamous criminal defense attorney who most famously represented OJ Simpson as part of his defense team during his 1993 murder trial, died Thursday. He was 87 years old.

Bailey’s son Bendrix Bailey confirmed his death but did not specify a cause, the Washington Post reported June 3.

Born Francis Lee Bailey, Jr., the attorney rose to prominence when he helped acquit physician Samuel Sheppard on charges of murdering his spouse in 1954 after arguing that excessive publicity around the case didn’t allow Sheppard a fair and unbiased trial.

After acquitting Sheppard Bailey went on to represent a host of high-profile alleged killers, including Albert DeSalvo, better known as the Boston Strangler who admitted to killing 13 women in the Boston, Ma. area in the early 1960s. DeSalvo negotiated a shrewd deal in which DeSalvo confessed to the murders in exchange for avoiding the death penalty. That wasn’t exactly a win for Bailey, though, as he agreed to the plea deal after failing to get DeSalvo off with the insanity defense.

One of the other prominent cases Bailey lost was the case of newspaper heiress Patty Hearst, who was was put on trial in 1975 for her role driving a getaway car in a bank robbery. Hearst was convicted and sentenced to seven years in prison, but only served 22 months. Hearst was actually recognized by two different sitting presidents — former president Jimmy Carter, who commuted her sentence in 1977, and former president Bill Clinton who granted her a full pardon in 2001.

Most famously, though, F Lee Bailey was part of the team that worked to exonerate OJ Simpson for the charges of murdering Nicole Brown Simpson and Ron Goldman in 1994.