After critically acclaimed turns in “Station Eleven” and “The Harder They Fall,” her latest role hit close to home. That’s why she was hesitant to take it on. 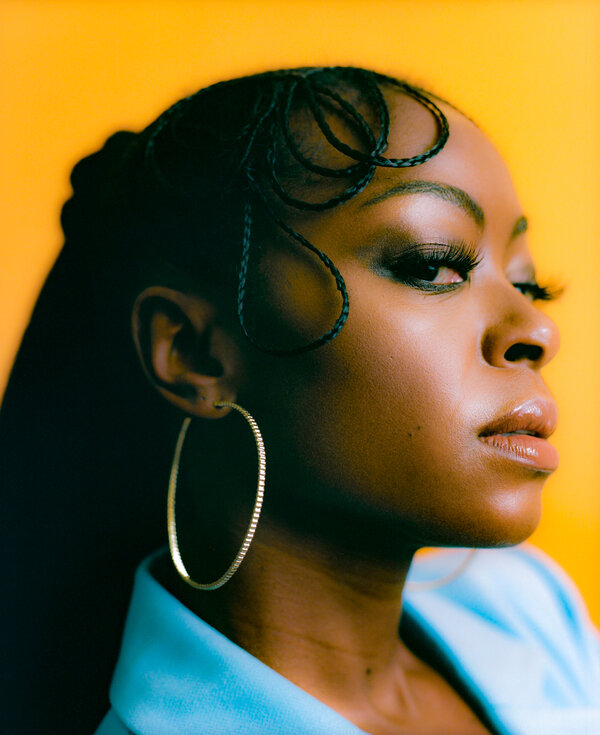 Danielle Deadwyler’s eyes are an instrument that she can play with precise control.

In HBO Max’s postapocalyptic drama “Station Eleven,” they stare into your soul as Deadwyler’s graphic novelist character, Miranda, soaks in the world around her. In Netflix’s all-Black western “The Harder They Fall,” they’re the last thing a baddie sees before he’s killed by Deadwyler’s quippy gunslinger, Cuffee.

And in her latest film, Chinonye Chukwu’s “Till,” about Emmett Till, the 14-year-old whose gruesome murder in Mississippi in 1955 by white supremacists helped spark the civil rights movement, they often fill your entire screen, tortured and unblinking in shocked grief, eyelids fluttering in painful remembrance. Though the actress has been an outsize presence in smaller screen roles in recent years, “Till” is her first lead part in a feature film.

“I’d been reared in the history, but I didn’t know the intimacy of it,” Deadwyler, 40, said of Mamie and Emmett’s relationship in a recent interview on a rainy evening at the Park Lane Hotel in Midtown Manhattan. “So this was a chance to show what it meant to be Mamie both in public and in private, and how she was intentional about and navigating those two identities.”

Deadwyler’s expressive eyes are only the beginning of her critically acclaimed performance as Emmett’s doting mother, Mamie Till-Mobley. Reviewing the film for The New York Times, Manohla Dargis praised Deadwyler’s range. “With fixed intensity and supple quicksilver emotional changes,” she wrote, “Deadwyler rises to the occasion as Mamie, delivering a quiet, centralizing performance that works contrapuntally with the story’s heaviness, its profundity and violence.”

DEADWYLER GREW UP with three siblings in southwest Atlanta, the daughter of a legal secretary and a railroad supervisor. Her mother, she said, was intent on giving the children a diverse cultural life.

“My mom was like, ‘You can’t go to U.G.A,’” she said, referring to the University of Georgia. “She had intentions for us to get out of a certain comfort zone.”

As a youngster, Deadwyler dabbled in theater and dance, taking her first dance class when she was just 4 after her mother saw her shimmying to “Soul Train,” and falling in love with theater in high school.

But she didn’t necessarily want to be an actor, she said, nor did she even fathom becoming one.

“It was just a part of my life since I was a kid,” she said, sitting cross-legged on the couch in a loose white button-up over black slacks and black crew socks. “It was lifeblood.”

She stayed close to home for college, majoring in history at Spelman while continuing to perform in plays. She earned a master’s degree in American Studies from Columbia in New York, writing her thesis on sex-positive representations of women in hip-hop. (In 2017 she earned a second master’s degree, in creative writing at Ashland University in Ohio.)

The comedian and co-host of the ABC talk show “The View” is known for her provocative opinions — and controversies.

When she was rejected for the women’s studies graduate program at Emory University in Atlanta — “I cried in the bathroom at the trust fund where I was interning,” she said — she turned to teaching at an elementary charter school for two years. But with her youthful looks and wiry frame, Deadwyler struggled to be taken seriously. “Quinta Brunson’s character on ‘Abbott Elementary’ looks young, but she has a teacherly presence,” Deadwyler said, clutching her knees to her chest. “I just looked young — I was fresh out of grad school. The kids were like, ‘What grade are you in?’”

But then came her big break: a role as the Lady in Yellow in “For Colored Girls Who Have Considered Suicide/When the Rainbow Is Enuf,” mounted by True Colors Theater in Atlanta in 2009.

Screen work soon followed, including the lead in the 2012 TV drama “A Cross to Bear,” playing a homeless, alcoholic mother. She also began booking small television roles: the antagonist LaQuita Maxwell on Tyler Perry’s prime-time soap opera “The Haves and the Have Nots,” a recurring role as Yoli on the Starz drama “P-Valley,” and memorable parts in FX’s “Atlanta” and HBO’s “Watchmen.”

The latter was the performance that came to mind when Patrick Somerville, creator of “Station Eleven,” was looking to cast his Miranda, the artist whose graphic novel drives the show’s narrative arc.

“Her eyes can do anything,” he said. “You can feel how substantial the person is inside her whether or not she’s talking.”

He put her through a lot of last-minute rewrites, but “she was never concerned with change,” he said. “She was always her own center. I was always impressed by her unbelievable confidence.”

HER BIGGEST LEAP to date, “Till,” is one she almost didn’t take.

Mamie Till-Mobley is best known for insisting on an open-casket viewing for her son’s corpse, to show the world what a mob of white men did to him, but the film focuses on her transformation from shellshocked parent to fervent activist. “My reps sent me the script, and I was like, ‘Do I want to do this?’” said Deadwyler, who is the single mother of a 12-year-old son, “because it’s a joyous endeavor, but it’s a painful one, too.”

In the end, the role of Mamie resonated in her bones.

For her audition, she submitted a self-tape that included the scene in which she knots a tie around Emmett’s neck — using her son, Ezra, as a stand-in — as he prepares to go down to Mississippi, telling him to “be small.” Then, in a video call with Chukwu, she re-enacted the moment when Mamie sees Emmett’s corpse for the first time. (“I warned my son, ‘Hey, man, you might hear some weird noises,’” she said.)

Chukwu, the director, said she knew immediately that she was watching something special.

“When I’m casting, I look at whether actors can communicate a story with their eyes,” she said. “Are they able to get underneath the words in a nonverbal way? Are they willing and able to dive into the work in a way that demands a vulnerability and focusedness? I saw all of that in her audition tape.”

Deadwyler’s wordless ability to act with her whole body informed how she shot the film, Chukwu said.

“I knew that I wanted the audience to see this Black woman’s humanity and that faces would be important,” she said. “But when I saw how much command and power Danielle had, I leaned into that even more.”

Mamie’s testimony scene in the courtroom, for instance — a seven-page powder keg of grief, frustration and rage — is shot in one long take. Chukwu said she originally planned on eight or nine other setups, but when Deadwyler received a standing ovation from the cast and crew on the first take — a close-up on her face — Chukwu decided: She didn’t need any more.

Deadwyler said the weight of Mamie’s suffering, her choice to fight battles for future generations even when she knows she cannot win in the present, settled into every part of her body on set. But the minute they wrapped for the day, a waiting car would take her home, Mahalia Jackson gospel songs on the stereo.

“It’s a sonic shift,” she said. “It’s the same thing with Mamie: There’s a private self and a public self.”

Yet there were lighthearted moments on set that reflected Deadwyler’s sense of humor. “At first I thought she was very serious, and that she’d get very annoyed with me, because I’m not,” said Whoopi Goldberg, who plays Mamie’s mother and served as a producer of the film. “But she is also very silly.”

Despite the film’s enthusiastic reception among both critics and audiences — it currently has a 99 percent fresh score on Rotten Tomatoes — it was a project that took more than two decades to reach the big screen, Goldberg said.

“People would say, ‘You know, nobody wants to see that story,’” she said. “You’d say, ‘No, people do want to see it.’ I guess it was the reckoning that happened that finally got people interested in telling these stories.” (“Till” is the second project focused on Mamie and Emmett’s story to be released this year, after the ABC mini-series “Women of the Movement.”)

“It has modern-day resonance,” Deadwyler said, adding that she has discussed the story with her son because “it would be neglectful for me to not talk to him about the possibilities.”

AFTER THE PUBLICITY TOUR for “Till,” Deadwyler plans to take a moment — just a moment — to soak it all in. She can also be seen starring alongside Zoe Saldaña in the new Netflix limited series “From Scratch,” based on Tembi Locke’s memoir about an American student who falls in love with an Italian chef. And she has a few film projects in the works, among them Kourosh Ahari’s sci-fi thriller “Parallel” and Netflix’s star-studded airport Christmas thriller “Carry On.”

“I want to collaborate with people,” she said. “And I’m looking forward to being approached for more projects, vs. doing 80, 100 auditions per year.”

In the meantime, after being told that her face can be seen in ads atop New York taxis, she marveled at her change in fortune, though she hadn’t seen one yet. “I would like to go quietly into the dark,” she said, laughing.

Deadwyler’s laugh is a curious thing, a sound you haven’t heard much onscreen: It’s a deep, rumbling, full-bodied “HA HA HA” that you can hear echoing down the hall long after the door closes. “Me, a serious person?” she says, eyes twinkling. “No.”

I ask what else people get wrong about her.