“Last Week Tonight” host has to show up in person to accept, however 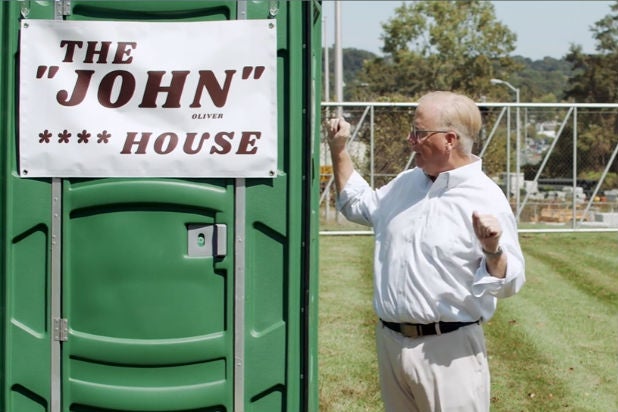 Looks like John Oliver will get his sewage plant after all. A week after once again calling out the town of Danbury, Connecticut on “Last Week Tonight,” Mayor Mark Boughton said in a video Sunday that he’ll name the city’s waste processing facility after Oliver — so long as Oliver travels to Danbury in person for the ribbon-cutting ceremony.

A little background: On the August 16  episode, during a segment talking about Jury selection in Connecticut, Oliver took a detour in order to insult Danbury, a town he selected apparently at random, in incredibly personal, profane terms. “If you are going to forget a town in Connecticut, why not forget Danbury because, and this is true, f— Danbury! From its charming railway museum to its historic hearthstone castle, Danbury, Connecticut, can eat my whole ass,” Oliver said.

“If you’re from there you have a standing invite to come get a thrashing from John Oliver, children included, f— you,” Oliver joked.

Boughton responded by announcing that the city’s sewage plant would be renamed “The John Oliver Memorial Sewer Plant. Why? Because it’s full of crap, just like you, John.” Pretty funny, but unfortunately he later admitted he was just joking.

Oliver revisited the subject on the August 30 episode, first congratulating Danbury for a truly good insult, then mocking it for not following through. “You had the first good idea in your city’s history and you chickened out on the follow-through. What a classic Danbury move,” Oliver said. Then after explaining that given the current state of things, he’s never needed something like he needs to have a sewage plant named after him, Oliver offered to donate $55,000 to local charities if Danbury would actually go through with it. Oliver gave the city a week to decide, after which he threatened to donate the money to charities in other nearby communities.

Those of you with a calendar handy already know that today was the deadline, and so it is that Boughton has accepted Oliver’s deal with one condition: Oliver has to come to Danbury in person for the ribbon-cutting ceremony.

But Boughton didn’t waste the chance to get one more dig in. He revealed that is Oliver refuses to come, the city already has named a poop-related thing after him: A portable toilet now known as the “John Oliver S—house.”

Watch the clip below:

Here’s the first installment of the beef, which begins 6 minutes and 16 seconds in.

Related posts:
World News:
‘I know nothing’ becomes hotel quarantine inquiry catch phrase
World's smallest Rubik's Cube goes on sale in Japan
Too much candy: Man dies from eating bags of black licorice
Hither Green burglar Henry Vincent's dad sells farmhouse for £1.5million after buying it for just £325,000 from OAP
Recent News:
This website uses cookies to improve your user experience and to provide you with advertisements that are relevant to your interests. By continuing to browse the site you are agreeing to our use of cookies.Ok