Coronation Street viewers are desperate for Yasmeen (played by Shelley King) to escape the clutches of Geoff Metcalfe (Ian Bartholemew) as his controlling behaviour has only got worse in recent months. The restaurateur will fight back at last next week but not before Geoff’s latest revelation – will Yasmeen be okay?

Yasmeen has been slowly coming around to the fact her husband Geoff’s behaviour is not what it should be.

ITV viewers have seen Geoff trick Yasmeen into marrying her while on holiday and he has increasingly restricted her from seeing her loved ones.

In recent weeks, Geoff has upped his abuse by killing Yasmeen’s beloved pet chicken, Charlotte Bronte, and forcing her to eat her food off of the floor.

There has been a light at the end of the tunnel as Yasmeen’s granddaughter Alya Nazir (Sair Khan) is aware Geoff is not as charming as he seems. 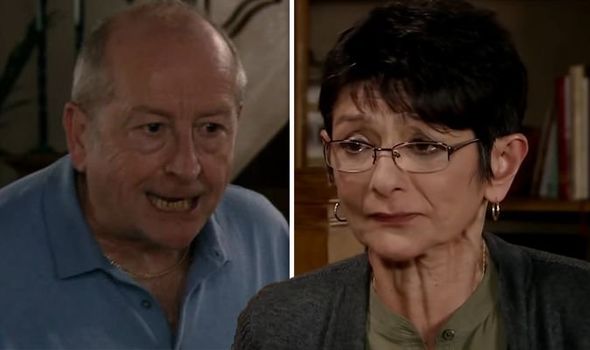 She has managed to make her grandmother realise Geoff is not as he seems and has encouraged her to leave him for good.

Earlier this month, Yasmeen finally sought police advice and was able to discover information about his past through Clare’s Law.

The law allowed Yasmeen to find out whether Geoff had any criminal convictions related to domestic violence.

After learning the truth about her husband, she has clearly started to plan an escape route but not before she receives some bad news. 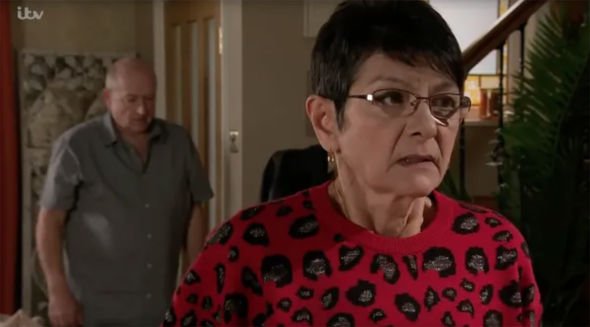 Tonight’s episode saw Yasmeen explode at her close friend Cathy (Melanie Hill) after she paid an impromptu visit to the couple.

Cathy has been worrying over her young employee Asha Alahan (Tanisha Corey), whose explicit videotape was released to all her friends and beyond.

However, Yasmeen uncharacteristically snapped at Cathy, leading the latter to note her friend had “changed” – but she is still oblivious as to why.

Meanwhile, viewers have seen Geoff arrange multiple visits to escorts in recent weeks, lying to Yasmeen about his whereabouts.

Geoff has been limiting Yasmeen’s budget, whilst spending the rest of the money on his own desires.

Poor Yasmeen will be dealt a shock next week after she decides to head to the doctors and is giving a difficult diagnosis.

Yasmeen has previously complained in the ITV soap about stomach pains and has not been feeling very well.

Now, Dr Gaddas (Christine Mackie) will provide her with the answer – she has tested positive for chlamydia.

Will she decide to tell Geoff the truth or will it finally be what makes her realise she needs to get out of the relationship?

Viewers know Yasmeen is set to attack Geoff next week after his latest stunt involves forcing his wife to change into an overtly sexual dress.

She will seize the opportunity and hit Geoff with a wine bottle – will he survive, or will Yasmeen finally be free of her abuser?