The Russo brothers provide their Spider-Man a great acting opportunity, but their film feels familiar and facile 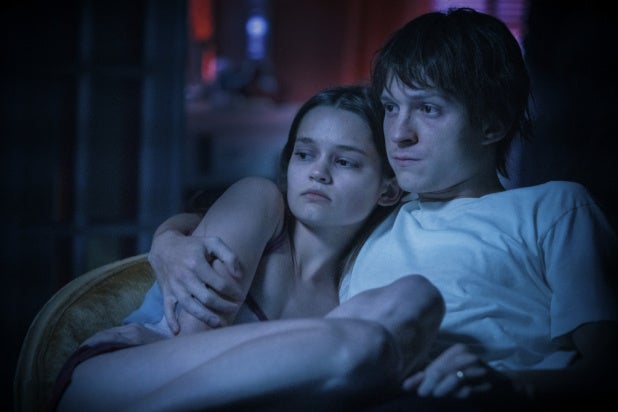 Some of the roles that attract rising young performers wanting to be taken seriously as adult actors include a) traumatized combat veteran, b) suffering drug addict, and c) desperate bank robber, and “Cherry” gives Tom Holland the opportunity to play d) all of the above.

As a showcase for Holland, “Cherry” absolutely offers the chance to stretch and expand his talents to places that the “Spider-Man” franchise would never allow. Beyond that, however, this is a distressingly familiar tale of trauma and addiction that often plays like a cover version of older, better movies about war and drugs.

Fraternal filmmakers Anthony Russo and Joe Russo, coming off the worldwide success of “Avengers: Infinity War” and “Avengers: Endgame,” obviously have the clout to write their own ticket, and they’ve opted to move in the opposite direction, making a film about life-sized human beings in everyday distress. Still, this adaptation of Nico Walker’s novel (written by Angela Russo-Otstot and Jessica Goldberg) takes a cursory approach to the big issues it seeks to explore. Holland’s character very pointedly has no name, but he doesn’t have much else, either.

In flashbacks, we meet our troubled hero at the age of 18, going to college and falling for classmate Emily (Ciara Bravo, “A Teacher”). They’re seemingly happy, until she suddenly announces she’s transferring to a school in Montreal; distraught, the young man joins the Army, and it’s too late to get out of his commitment when Emily changes her mind and stays. (We get a few hints regarding her emotional wounds, but like so much in “Cherry,” this angle is underexplored.)

They get married before he’s deployed to Iraq (it’s just after 9/11), and after grueling basic training, he sees his first combat as a medic. It’s destructive to his psyche, particularly after his best friend dies right in front of him. (Points to the film for making the aftermath of this horrifying incident visible on screen rather than being discreetly implied.) Tour of duty accomplished, he returns home to receive the medal of valor, but is physically and psychologically damaged, a situation briefly remedied by an inattentive VA doctor’s prescription of oxycontin, which eventually turns both him and Emily into self-described “dope fiends.”

That’s when the bank-robbing starts, both to afford their fixes and stay in the good graces of a preppy-dressing dealer known only as “Pills & Coke” (Jack Reynor). As the film lurches toward the climax of its 140-minute running time, it becomes uncomfortably apparent that the filmmakers are less interested in addiction as a source of drama, character, or commentary, and more as a chance to gawk at tragedy.

“Cherry” does acknowledge that the military-industrial complex feeds on young men and women who lack other economic opportunities, and then fails to take proper care of them after they’re been scarred by combat, but that’s the only piece of contextualization the film has to offer. And since our nameless hero and Emily exist in a void with few friends or family members — each has parents that are seen once — we’re left with one line in Holland’s reams and reams of narration about how their addiction has destroyed their personal relationships.

More frustrating is the Russo’s stylized Pop filmmaking style, self-consciously jittery throughout, turning genuinely human scaled issues into sensational bursts of energy. The war sequences and drug-abuse scenes allow Newton Thomas Sigel’s camera to glide all over creation, and that dizzying visual sense might have carried some meaning and emotional impact if left alone elsewhere. This, however, is not the case, and what works during emotionally frenzied moments (owing a debt to films like “Apocalypse Now” and “Trainspotting”) proves distracting everywhere else.

Holland and Bravo (and, in his few scenes, Reynor) make the most of the opportunities being laid out before them. These are characters pushed to the edge, but the actors know when to pull back and maintain a sense of tragic scale, even when they’re engaged in extreme behavior. Smaller moments land as well: Holland’s phone-call home from Iraq after his friend’s death, in particular, features a full-bodied grief that’s tough and powerful to witness.

These moments of emotional honesty aren’t enough to give “Cherry” the resonance that these situations deserve. From its facile depiction of the role of incarceration in the rehab process — addiction is a health issue that we keep mistakenly treating as a criminal issue — to the under-writing of the characters, what should be a harrowing drama instead comes off as an anti-drug pamphlet.

“Cherry” opens in select theaters Feb. 26 and on AppleTV+ March 12.