At 5:30 a.m. on November 5, 1989, Betty Broderick used a key stolen from her daughter to enter the San Diego home of her ex-husband, Dan Broderick, and his new wife, Linda, and shot them both dead.

I was asleep in my bedroom at my parents’ house about half a mile away. The cavalcade of sirens woke me up early on a Sunday and I was very annoyed. I was 14 years old.

It is hard to downplay how much Broderick’s crime imprinted on the psyches of those of us who lived in San Diego at the time. Dan Broderick was a president of the San Diego County Bar Association; he specialized in medical malpractice. He had a name that people just knew, either from seeing in the San Diego Union-Tribune’s coverage of his cases, or because your frenemy went to the same posh private school as his children. Despite its beachy and chill permanent-suburb-of-Los Angeles vibes, Dan Broderick was as firmament as you could get in San Diego.

When USA Network announced that the second installment of its “Dirty John” anthology series would be about Broderick, I lit up my high school friend text chain with the news. At the time, we drove by the house where the killings happened out of teenage morbid curiosity — and that morbid curiosity lingers to this day. From the crime onward, our discourse has remained the same: Betty was really, truly nuts, a woman scorned.

And so it’s a credit to creator and showrunner Alexandra Cunningham (“Desperate Housewives”) that her version of the Betty Broderick tale displays that yes, Betty was really, truly nuts, a woman scorned — but she didn’t just snap. According to this telling, it was a lifelong process of being diminished by her family, her faith, and yes, Dan Broderick, that took away her agency and her ability to comprehend that there were viable life options outside of being the perfect, thin, highlighted blonde trophy wife and mother. It’s a compassionate telling, one that teeters on the right side of empathy for a heinous convicted killer who was, also, a broken woman.

The first few episodes of “Dirty John: The Betty Broderick Story” are compulsively watchable camp, with the ‘80s hair and shoulder pads and, God help us all, leotards over shiny tights as workout outfits worn in public. What keeps it from descending into nostalgia parody are the performances of Amanda Peet and Christian Slater as Betty and Dan, and a deft, gradual tonal shift as Betty descends into homicidal madness.

Slater is perfect for the role, but also has that actor problem where as soon as he’s cast in something you know the character is going to be a slimeball — and that gives away the narrative before the story does its own reveal in time. (This is the problem of emulating Jack Nicholson in your career instead of, say, Tom Hanks.) His Dan is a smug weasel with a self-admitted addiction to conquest and acquisition, be it college degrees — he had an MD and a JD, in that order, come the hell on, you bro nerd  —  money, Corvettes, more bespoke shirts or a new, younger, blonder wife. 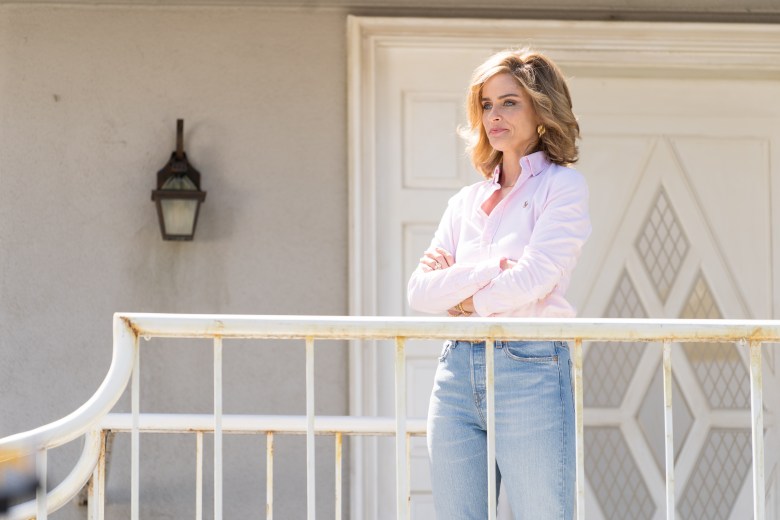 It should have been, by all accounts, easy for Betty to walk away from this standard-bearer of toxic masculinity. But thanks to Cunningham’s deft writing and Peet’s remarkable performance, it becomes clear that Betty was walking into a labyrinth of her own making the second Dan sidled up to her in a South Bend, Ind. college bar.

Good Catholic girls don’t get divorced no matter the number of subtle and profound indignities her husband forces on her — I mean, her mother was already scandalized by Dan refusing to wear a morning coat at their wedding, what would she think if she pulled the ripcord when he required her to make the bed on their honeymoon? Or when he was M.I.A. when she lost a child shortly after birth? Or when she could only get permission to get her tubes tied by asking him when he was asleep? Or when he lied for two years about the affair he was having with his legal assistant — who couldn’t even type?

Peet manages to cut through a lot of the frippery of the production that if dumped on a lesser actor could be overwhelming — the big hair, the frosted blue eyeshadow, the “Dynasty”-inspired clothes, the swank events — to evince the emotional truth of this version of Broderick. Peet’s Betty puts up with a lot of shit because never, ever in her life could she imagine an alternative. It doesn’t forgive the murders, nor does it try to, nor should it. But “Betty Broderick” tells an arc that’s much more complicated than the scorned woman trope.

Betty didn’t just crack because her husband ran off with another woman; she cracked because she was a hothouse flower never taught any coping mechanisms outside of her very privileged greenhouse. By eschewing the temptation to chew the hell out of the beachy scenery, Peet’s earnest choices give a poignancy to the role that creates a dissonance with the viciousness of the woman’s acts. Yes, she empties Dan’s closet of his custom-made clothes and sets them on fire in the backyard. But the look of despair on Peet’s face as she watches the flames shows there’s no vindication there, just propulsive, demented hopelessness. 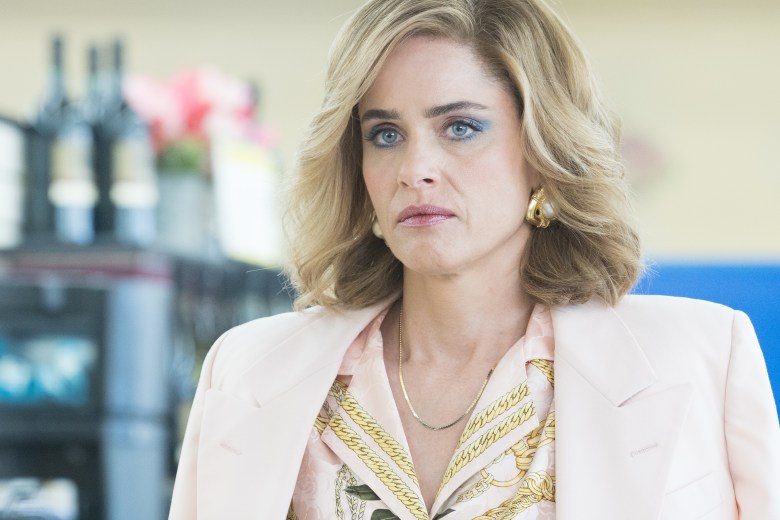 This isn’t the first time the Broderick tale has been adapted; there have been countless rehashings in true crime TV shows, podcasts, interviews from prison, Oprah specials and miniseries — one of which earned Meredith Baxter an Emmy nomination in 1992 for her portrayal of Betty in ABC’s “A Woman Scorned: The Betty Broderick Story.” But none of those came with the added context of the passage of time, the advancement of feminism, and hindsight that softens snap judgments.

At the end of the series, after Betty is convicted at a second trial and it’s revealed she’ll spend the rest of her life in prison, there is a series of vignettes with a glowing Peet that imagine how the character could have chosen a different path. She could have accepted the loss of Dan’s affections; she could have doubled down on her love for her children; she could have participated in the legal process of divorce instead of wishing the whole thing away in a miasma of denial and rage. Could have, could have, could have. But she didn’t. Or didn’t know how.

Now that I’m older – and hopefully less of a complete dick than the tyrannical 14-year-old more annoyed at losing sleep than the lives of our neighbors  — I feel more empathy for Betty. It’s taken me 30 years to get to this point. It’s impressive that the eight episodes of “The Betty Broderick Story” give viewers the ability to access that complete emotional cycle.

After watching, I Googled to find out whatever became of Broderick’s four children. Daniel T. Broderick IV is still in San Diego. He works in real estate. He’s one year younger than me.

“Dirty John: The Betty Broderick Story” premieres on USA Network on June 2 at 9 p.m., with two episodes back-to-back. The subsequent six episodes will premiere Tuesdays at 10 p.m. There is a companion podcast to the series available from the Los Angeles Times; the studio wing of the newspaper is also a producer on the show.