Diana Rigg, British icon of the 1960s, has died at the age of 82. Rigg is best remembered for her turn as no-nonsense secret agent Emma Peel in the 1965 series “The Avengers,” as well as a memorable role as Olenna Tyrell on “Game of Thrones.” The actress was diagnosed with cancer in March and her agent released a statement to the BBC saying she was surrounded by friends and family when she passed.

Rigg came to define the era known as the “Swingin’ Sixties” in London, both in terms of fashion and for the characters she played. Her role as Emma Peel came to be one of the first depictions of feminism for many, though Rigg often courted controversy later in life for her comments decrying the feminist movement and refusing to participate in it. Regardless, her turn as Emma Peel, as well as her later performance as James Bond’s only wife, Countess Teresa di Vicenzo, in the 1969 feature “On Her Majesty’s Secret Service” left many seeing a different side to what female characters could do on-screen.

Enid Diana Elizabeth Rigg was born on July 20, 1938 in Doncaster, England. Until she was eight years old she lived in India, where her father was a railway executive. She’d eventually return to English to finish out her education before attending the Royal Academy of Dramatic Art, which has turned out performers like Richard Attenborough, Sean Bean, and Jessie Buckley. She dabbled in theater early and made her professional debut on-stage in “The Caucasian Chalk Circle” in 1957.

But she didn’t stay in theater for long — though it was something she’d always go back to and eventually win a Tony in 1994. In 1961 she made her debut as Emma Peel in “The Avengers” as a last-minute replacement for another actress. The role instantly made her and co-star Patrick Macnee stars, but Rigg was uncomfortable being a sex symbol with her life on display.

On top of that, Rigg revealed just last year that she often had to hold out for higher pay. “Not one woman in the industry supported me when I demanded more money after finding out the cameraman on ‘The Avengers’ was paid a lot more than me. Neither did Patrick [Macnee],” Rigg said in a 2019 interview with the Guardian. “But I was painted as this mercenary creature by the press when all I wanted was equality. It’s so depressing that we are still talking about the gender pay gap.” Feeling generally unappreciated by the studio, Rigg would leave “The Avengers” after two years.

She transitioned to films after that, getting the coveted role in “On Her Majesty’s Secret Service”; Rigg said she took the role to gain recognition in America. She would later appear in features like “Theatre of Blood” (1973), “The Great Muppet Caper” (1981), and an adaptation of “Snow White” in 1987.

Her role in 1971’s “The Hospital” saw Rigg secure her only Golden Globe nomination. The feature was an Arthur Hiller-director/Paddy Chayefsky-written satire about a hospital doctor’s personal deterioration while a killer stalks the halls of the house of medicine. 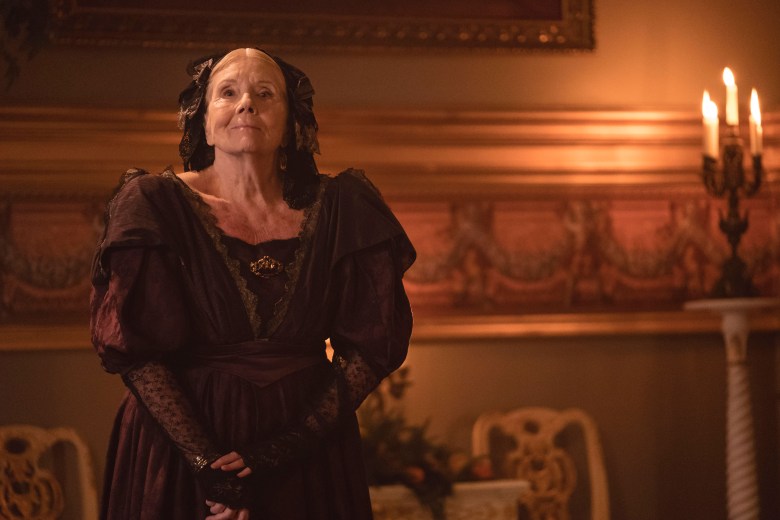 But it was television that remained Rigg’s playground. She regularly made appearances on the BBC, including adaptations of Charles Dickens’ “Bleak House” and William Shakespeare’s “King Lear.” Rigg would be nominated for Primetime Emmys nine times throughout her life, starting with “The Avengers” in 1967. She’d later be nominated for her turn as Mrs. Danvers in the 1997 Masterpiece Theatre version of “Rebecca,” and she secured four nominations for Olenna Tyrell in “Game of Thrones.” Her performance on the popular HBO series presented her to a new generation of fans, and Rigg said in interviews she would have loved to have remained on the series for longer.

Though Rigg was often included as a feminist icon in articles and polls, the actress herself often had a problem with the term. In a 2013 article in the Scotsman she said: “I love women but am aware we’re dangerous and deeply competitive, although I gave up being competitive long ago. Feminists deny it, but basically it’s all about men and sex – ‘Mirror, mirror on the wall, who is the prettiest of us all?’”

She’d eventually tweak those comments, especially in the wake of discussing gender parity. In a 2019 interview with the Jakarta Post, Rigg praised actress and writer Phoebe Waller-Bridge for her work in presenting women as they are. When asked again about her possibly being an anti-feminist, Rigg stated she wasn’t “anti-feminist, but I dislike feminists when they become aggressive and anti-men, it makes no sense to me. What’s the point of turning your back on them. We need more dialogue.”

Rigg would receive the Most Excellent Order of the British Empire — Britain’s take on knighthood — in 1988 and would become a Dame in 1994 for her services to drama.

Rigg is survived by her daughter, actress Rachael Stirling, and one grandchild.