BBC’s Mark Stacey experienced a rollercoaster of emotions in a recent episode of Antiques Road Trip when he spotted an intriguing case which he hoped would hold an item of jewellery worth a lot of money. But when he opened it up, it was empty. However, all was not lost as he took it to auction and there was a market for it, giving him a profit of £170.

The clip shows him inside an antique dealer and he tells those watching at home: “Now, I’ve seen this little box here, it’s got Ollivant and Botsford on top of it.”

The show’s voiceover person added some context: “Ollivant and Botsford are jewellers, silversmiths and watchmakers.”

“Dealer Jim will get it out of the case, drumroll please!” The voiceover teased. 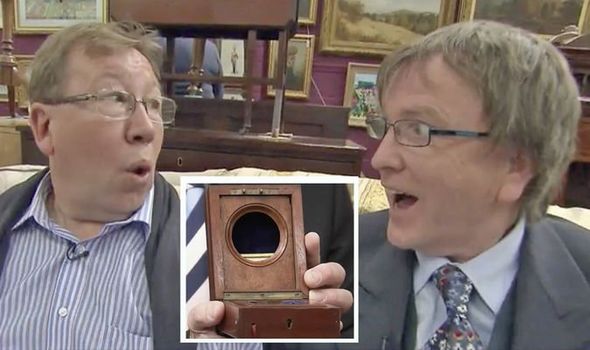 “Let’s hope it’s as exciting as it looks,” Mark said and then opened the case to find it empty.

“Oh, that was an anticlimax,” viewers heard the voiceover person remark.

“Whatever was in there, issued by the Royal Observatory Greenwich, 19 September 1917,” Mark said reading the label inside.

“The box used to contain a deck watch used for naval nitration the number one the box’s lid uniquely identifies it and ties it to these records held in the Royal Observatory Greenwich,” Antiques Road Trip fans were told.

“They confirm the box’s provenience and tell the story of its working life.

“It was acquired by the Royal Observatory in the 1890s and was issued to many Royal Navy vessels before being retired in 1922.”

Mark then said: “Just a little intriguing little thing but £40, is the dealer negotiable do you think?”

Jim replied: “I’m sure we could do something on that price.”

The antiques expert then haggled a little more: “Do you think he would come down to £30?”

Following a call they shook hands on £30.

The mahogany compass box minus the watch then went to auction and got a surprising end result.

“Two commissions with me,” the auctioneer hollered. “And I go in straight at £100…

“I don’t know what to say,” Mark commented utterly shocked by the result.