Jeremy Vine caller slams the idea of abolishing the monarchy

The Channel 5 talk show host welcomed guests Jacqui Smith and Dominique Samuels on Tuesday as they debated the idea of abolishing the monarchy after Prince William’s reign as king. Both guests edged towards the side of abolishing the Royal Family’s status, with Dominique admitting her “ideal country” would be a republic and Jacqui suggesting those “at the top” shouldn’t be exempt from being removed. However, caller Hannah phoned in to vehemently defend the Royal Family’s status against the two guests’ stance.

As the debate kicked off, Jacqui shared her opinions on the issue, telling Jeremy: “I wouldn’t design a political system where those at the top couldn’t be removed from power.”

However, the former Home Secretary and Strictly Come Dancing star did admit she couldn’t see it happening in the near future.

Dominique weighed in with her viewpoint: “If I was creating my ideal country I think it would be a republic.

“I do have a lot of respect for the Royal Family,” she added. “I think it would only happen if the public wanted it to.” 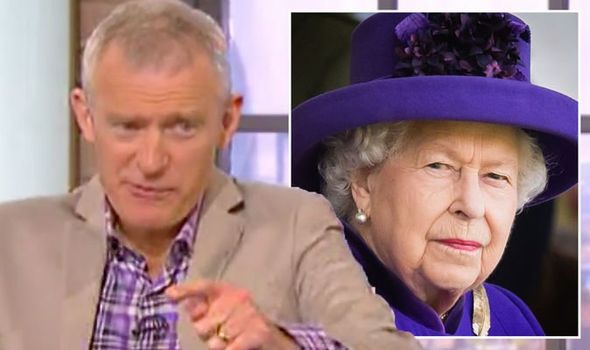 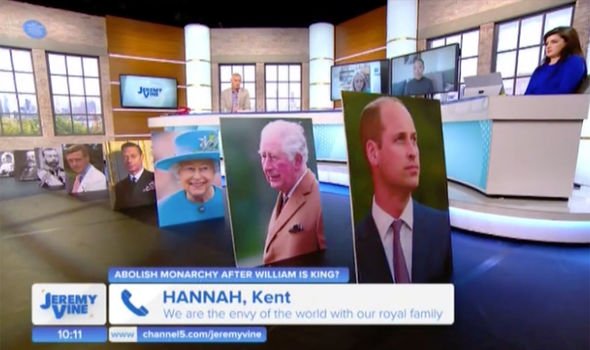 Jacqui also hit out at the idea that countries without a monarchy lack stability.

But while those in the studio appeared to side against the idea of a ruling monarchy, caller Hannah phoned in to point out just how much The Queen and her family offer to the UK.

“We are the envy of the world,” the Jeremy Vine guest hit out.

She continued: “We have a Queen who is totally respected, and Prince Philip, a lot of people were very sad to see him go. 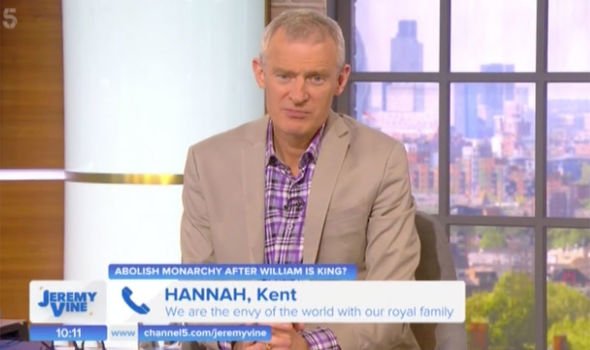 “What really wasn’t advertised enough was the enormous amount of charity work he did.

“[Prince] William is modern thanks to Kate [Middleton] – they’re so public related.

“They will bring up [Prince] George in a similar vein and I think he could possibly make a very good king.”

And when Jeremy then put to her how there were arguments against the royals, Hannah defiantly stood firm: “Absolute rubbish.”