God doesn’t take the stage until the second song in Roman White’s good-hearted summer camp-set Netflix musical “A Week Away.” His sudden invocation hints at a cheeky sense of humor about the whole thing that is sadly lacking from the majority of the movie. There’s nothing really sneaky about the white bread Christianity — pretty plain stuff about how God loves everyone and it’s nice to be kind to people — at the soul of White’s film, but the sudden mentions of God, the Bible, and salvation are first introduced with a winking nature that hints at a funnier, fresher feature underneath. Yet even as “A Week Away” wears its relentlessly optimistic and cheesy soul on its sleeve, it’s hard to dislike.

Before God and his catchy tunes, however, there is young Will Hawkins (Zac Efron lookalike Kevin Quinn, best known for another summer camp-set project, the Disney TV series “Bunk’d”). A teen orphan who has cycled through cities, schools, and foster families since the tragic death of his parents, Will is about to be tossed into a juvenile detention facility after, get this, stealing a cop car (he just “borrowed it!,” he argues, and that’s about all we’ll ever have explained about that). Salvation arrives in the form of perky Kristin (Sherri Shepherd) and her dorky-but-sweet son George (a charming Jahbril Cook in his feature debut), who offer to take Will in for a session at their beloved summer camp.

Will’s reticence is understandable — the cop car-stealing orphan really doesn’t seem like the summer camp type — but he’s got no other choice. It’s camp or juvie. He may be a tough kid, but he’s not a stupid one. It’s worrying though, how quickly Kristin starts singing about God, which is made all the worse by how quickly every other kid on the summer camp bus does, too. By the third vaguely Jesus-y song, Will finally catches on. He’s going to a Christian summer camp. Oops!

His attention is soon elsewhere, as upon landing at the camp, cheery Avery (Bailee Madison) catches his eye, while smarmy overachiever Sean (Iain Tucker) tickles his competitive side. What’s a few days with the God Squad? (And, perhaps more earnestly: what’s a few days with some genuinely nice people who don’t seem at all suspicious of the tattooed stranger in their midst?) While the story beats of “A Week Away” are predictable to anyone who has ever watched any sort of YA rom-com — Sean’s trajectory in particular feels pre-ordained by a dozen other films — this one seems wholly at ease with its tropes, livening them up with a large assortment of musical sequences to keep things fun and flashy.

White, a prolific music video director who has shot videos for stars like Taylor Swift, Justin Bieber, and Carrie Underwood, previously directed the similarly themed VOD musical “Summer Forever” in 2015. There’s no question White knows his way around a peppy song-and-dance sequence, and the infectious joy of even the most confusing of songs (the film whinges between zippy original pop anthems and incredibly earnest mash-ups of established Christian tunes with absolute abandon) will have even non-believers raising their fists in the air. Yet some of the film’s more ambitious sequences, like a neon-colored extravaganza that plays out in George’s head, are cut oddly short, while a montage set to a song that was likely meant to be performed by the cast, not just played over the action, feels out of place in what’s such a pure musical. 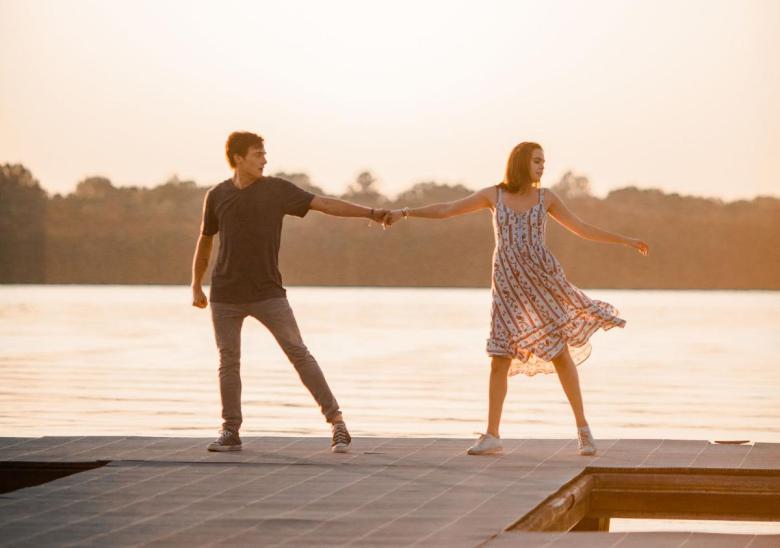 And while the film’s Christian bent is most obvious in its songs — even a kicky jam about taking risks eventually comes to feel a bit like a banger about baptism — other elements hint at its literally modest aims. One sequence set at the camp’s lake is packed with sun-drenched, smiling teens, but it’s soon clear that there isn’t a bikini in the bunch, not even a bare chest or leg: each camper is fully outfitted in shirts and tanks (even the boys) and every girl is also sporting a pair of shorts over their suits. It’s wholesome!

The forgettable title is explained during a tone-deaf sequence in which David tells Will that the camp is called “Camp Aweegaway” because campers spend “a week away” from home, seven days that just might change their lives. At least that helps clear up how long the action is playing out, as “A Week Away” could be easily be set over the course of four days or four weeks. The basic operations of the camp are similarly confusing (there appear to be only two adults on site, and as dazzling as Shepherd’s smile is, it’s never explained what she actually does at Aweegaway), plus its overall population, which fluctuates entirely based on how many bodies are needed for a particular musical sequence.

Thanks to some peppy songs and surprisingly solid performances (Madison, a former child star, adds a real heft to some of the film’s most formulaic scenes; Cook is very funny as the quirky best pal) mean that “A Week Way” is good enough anyone with a “High School Musical”-sized hole in their entertainment consumption. Its low-key religious underpinnings — truly, no one even hauls out a Bible during the entire film — likely won’t rankle the secular set, even as Christian kids will be happy to see their worldview reflected by way of a mild crowd-pleaser. It’s hammy, it’s predictable, it’s a little silly, but what YA musical isn’t?

“A Week Away” is now streaming on Netflix.