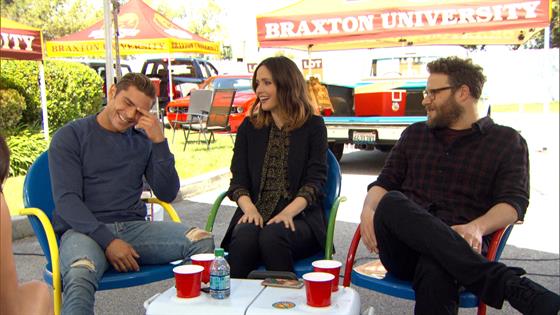 Zac Efron is sitting in the hot seat.

On Thursday, the actor joined Sean Evans for a round of fiery wings on Hot Ones and opened up about everything from High School Musical to having breakfast with Leonardo DiCaprio.

During the “Explain That ‘Gram” segment of the show, Zac recalled sitting next to Leo during a basketball game. Little did he know, their interaction would turn into a fun-filled outing the next day.

“He was like, ‘Hey, man, do you want to, like, go get breakfast tomorrow?’ And I was like, ‘Yeah, dude,'” he said. “So…he wrote his phone number down and handed it to me while the other team was scoring and nobody saw. And he cooked me breakfast the day at his house. He cooked—he actually, he cooked waffles and then he burned those and then we made pancakes. It was awesome.”

During their breakfast, The Greatest Showman star got a valuable piece of advice from the Oscar winner.

“I had a billion questions for him,” he said. “And, like, sitting next to Leo, I was just, like, ‘Dude, how have you handled this for so long?’ And he was like, ‘Frankly, you’re getting it a little bit different…Don’t worry about it, man. You’re good.'”

Reflecting on the Once Upon A Time in Hollywood star’s kindness, Zac said, “That’s the biggest hand you can extend, I feel like, in Hollywood, is looking out for somebody younger. So, rock on, Leo. Thank you, buddy.”

Still on the topic of handling the paparazzi and fans, the Neighbors star explained that his most “intense” fan base are moms, even long after his Disney Channel days.

“You know what? I think moms are little bit less…they have less of a guard up, in a good way,” he explained while battling the spice. “Dads, there’s this weird thing of, like, ‘We’re all men here, right?’ So, it’s like, they don’t know if they want to admit it or not…and then, like, later in the same night, I would see that person and they would be, like, a little drunk singing a High School Musical song.”

See if Zac can handle the heat and watch him reminisce over his films in the epic video above!